As Apple gets ready to report its 2020 Q1 earnings, the Wall Street Journal has switched its gears from incessantly claiming that the company was ‘headed for a prolonged slump’ to backhandedly acknowledging that its coverage of Apple has for years been totally wrong. But, it has yet to take responsibility for its role in stringing together false media narratives of doom that portrayed Apple as being on the verge of collapse. 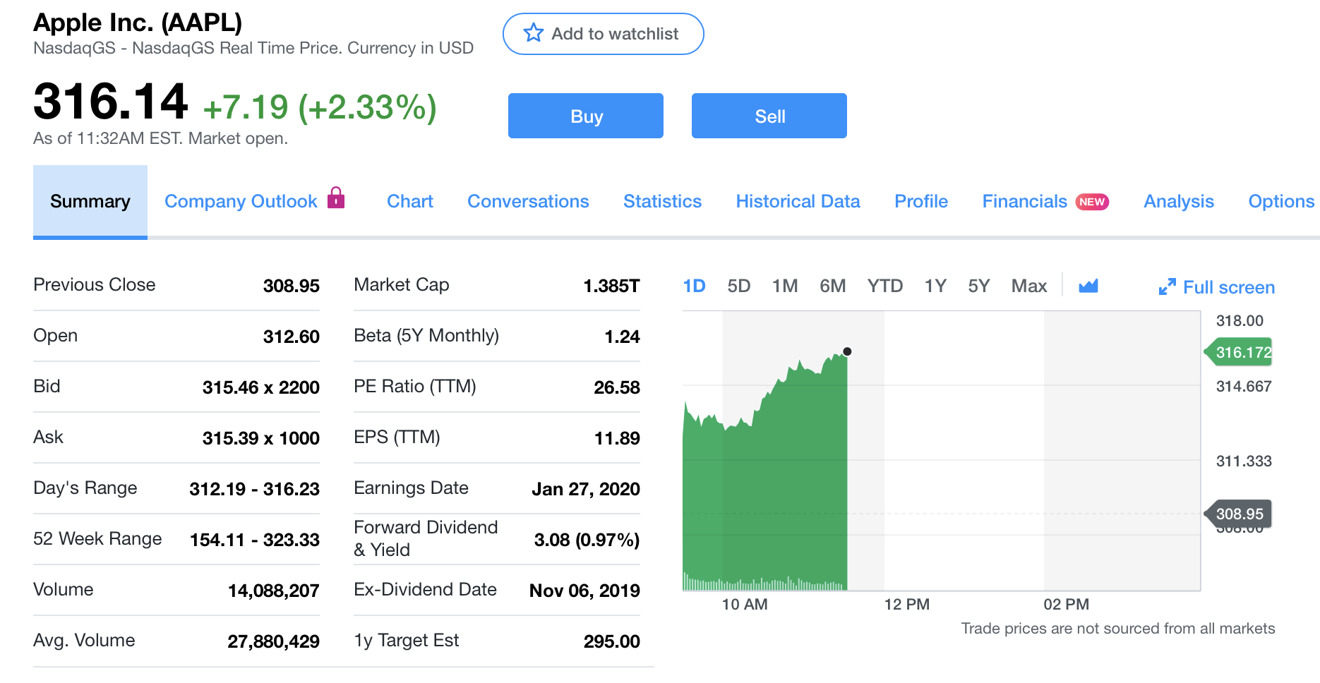 “Apple Was Headed for a Slump. Then It Had One of the Biggest Rallies Ever.”

The financial paper recently published a piece—under the astounding, passive headline above. It expressed surprise that Apple investors have dramatically shifted their valuation of the company, and now recognize it as being worth a price to earnings multiple nearly as high as Google or Microsoft.

Yet those two companies have struggled to establish attractive, secure, and profitable consumer platforms in phones, tablets, wearables, and even in conventional PCs. Both have valuations driven recently by revenues from cloud computing, but Apple continues to earn far higher revenues and profits from its broad range of hardware, software, and services businesses. It has recently made new expansions in markets, including audio devices, video game subscriptions, original entertainment, health, fitness, and financial services.

The reality is that Apple has been a phenomenally competent and reliable cash-generating machine for many years. It has been so, even as tech media writers have incessantly portrayed the company as a one-hit wonder perpetually on the verge of being overtaken by various commodity rivals. But, those competitors are all struggling in vain to attract customer loyalty, are still trying to consistently generate sustainable profits, and are failing to identify accessories and new computing form factors with significant commercial relevance.

Apple’s “big rally” shift in valuation occurred as overwhelming evidence continued to pile up in the face of the mainstream reporting that downplayed the importance of Apple’s high-value customers rushing to plug themselves into its extremely attractive platforms on a global scale. The only way to distract from Apple’s vast sales of premium goods was to compare them against the global production of every cheap device collectively shipped by the rest of the world. Imagine how meaningless it would be to compare Starbucks sales with every cup of coffee brewed by anyone, anywhere in the world, and conclude that Starbucks barely even exists.

Across the last several years, Apple’s chief executive Tim Cook has emphasized to the company’s investors the idea that customer loyalty and satisfaction were far more critical metrics of Apple’s success and future sustainability than unit sales and market share, particularly when comparing Apple to oranges.

Market research groups such as IDC, Gartner and Strategy Analytics —and the reporters who uncritically repeat their numbers as factual and important —have continued to harp on unit sales and Apple’s percentage of all of the world’s collective shipments of anything resembling a wearable or a tablet or a phone. This has served to equate Apple’s high-value sales of notebooks, phones, tablets, watches, and audio devices —all carrying prices high enough to demonstrate substantial interest from paying customers—with cheap loss-leaders in areas like netbooks, exercise bands, WiFi speakers, and knockoff earbuds. None of these loss-leaders have generated substantial profits as a business nor have attracted the kind of ecosystem that supports other hardware sales, software, services, or even significant advertising.

The incredulous Wall Street Journal article by Tripp Mickle—a blogger versed in sports, tobacco, and alcohol that the paper appointed to handle its coverage of Apple’s global operations a few years ago —failed to acknowledge any personal role in inventing the bleak expectation that “Apple was headed for a slump,” despite years of regularly implying that “perhaps some could not afford” Apple’s products and suggesting that customers didn’t care about brand names, compatibility, software updates, security, privacy, industrial design, customer service, or any of the other factors that have made Apple the most valuable tech company to ever exist. Supposedly, all they cared about was the price. 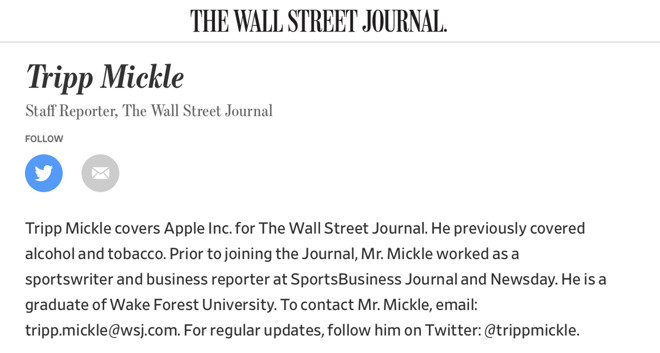 This mirrored the parallel reporting by Bloomberg writer Mark Gurman, who wrote that “bad news for Apple” was “piling up” in the form of channel checks and supply chain analysis that turned out to be spectacularly wrong and even appeared to be intentionally falsely contrived.

Yet after decisively being proven wrong in their outlooks, their promotion of commodity and cheapness, and in their understanding of the market, consumer preferences, and global supply chains, both writers have carried on as if the delusions they invented and advanced were just inherently always there, and that any good news about Apple was probably just a temporary blip that portended more bad news around the corner.

How many years can one write up ridiculous and delusional fictions about a subject they are supposed to know? It’s like a couple of weather anchors constantly predicting black ice and freezing rain in Tahiti and recommending travelers go to the North Pole instead.

“Shares of the iPhone maker have more than doubled over the past year, and investors are divided on whether they can keep climbing,” Mickle wrote this week, after years of portraying Apple as a fundamentally broken company on the verge of collapse. Readers with any faith in the Wall Street Journal certainly didn’t benefit from Apple’s incremental doubling in valuation over the past year. Mickle noted that Apple’s doubling resulted in “adding over $ 725 billion to its value, more than JPMorgan Chase & Co. and Exxon Mobil Corp. combined—and well above the total value of Facebook Inc.”

How could the Wall Street Journal refuse to acknowledge Apple’s ability to increase by a Facebook-sized valuation until after it had occurred? Then, in perhaps the most bizarre language ever used, Mickle described the stock market as being a place where buyers and sellers differ in their opinions on the value of a given security—as if this were unique to Apple shares.

“Apple’s skyrocketing valuation has divided investors,” Mickle wrote. “Some shareholders have sold off stakes, believing the iPhone company is riding a wave of enthusiasm that could crash after the release of its next handset. Others have added to their position, arguing Apple’s growing services business means growth will come from a business with higher margins than its hardware products.” 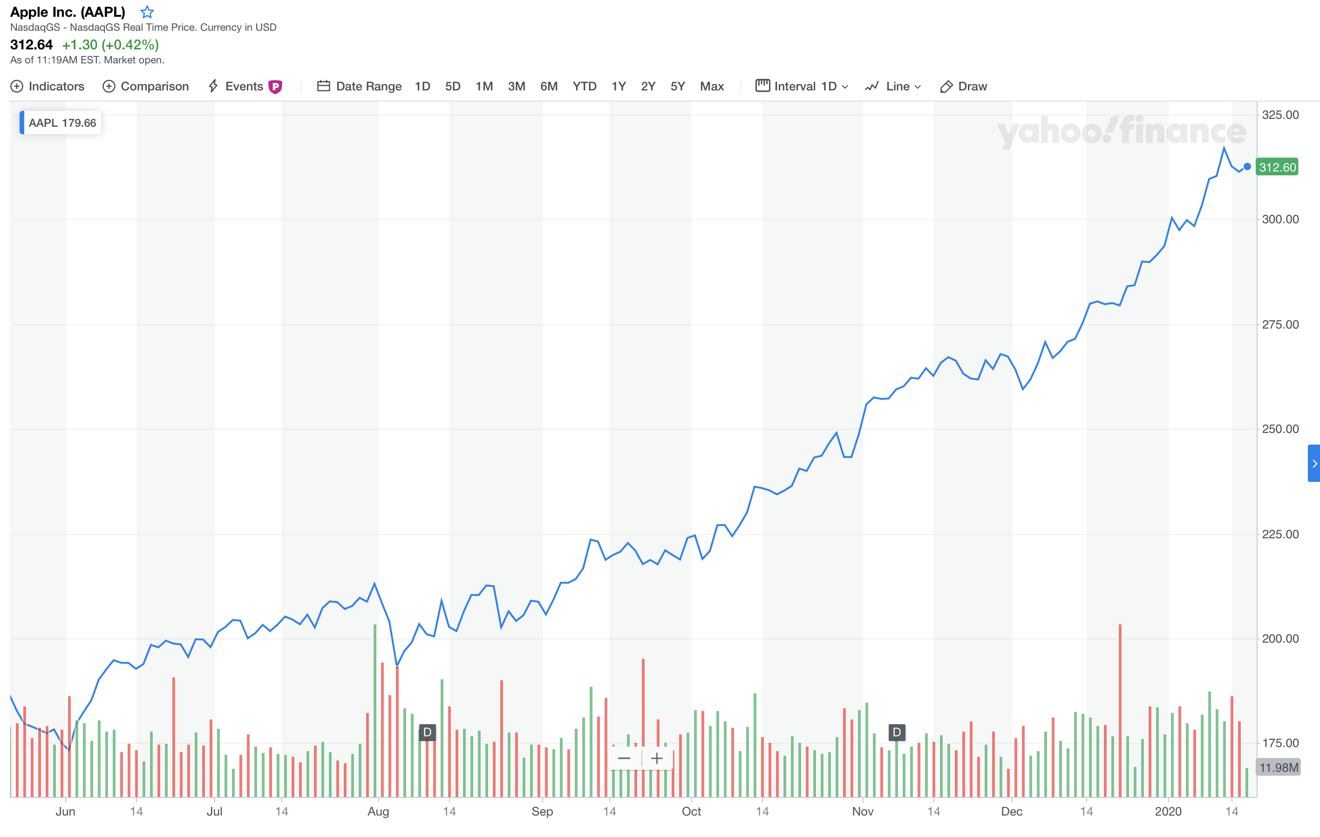 “Apple’s skyrocketing valuation has divided investors” into winners and losers

Was there not even a single copy editor at the Wall Street Journal that could shoot down the bold assessment that there are both buyers and sellers in a market? A market can’t exist when there are not both buyers and sellers. Perhaps in language, Mickle is more versed in: a sports event has both players that win and lose. Or once you smoke a cigar, it’s not there anymore. This is the most elementary idea in a market, expressed as if it is some sort of deep observation of the state of Apple, years after being completely and consistently wrong about its trajectory. No ice in Tahiti this morning, but who can say what the afternoon might bring?

The confusion, as detailed by the confused

“The confusion over Apple’s identity reflects its transition from a company that emphasized shipping more iPhones into one touting sales of services and accessories,” Mickle next wrote, apparently because he’s only been writing about Apple since halfway through its history of selling iPhones.

In reality, Apple has been “touting sales of services and accessories” for decades. It was quite well known that iTunes was a major component in the success of the iPod back from the beginning of the millennium. Apple began efforts to create Pro apps to sell more Macs, starting with Final Cut back in 1998. And Apple has been selling accessories for its computers since the Apple II.

The new services Apple introduced at the beginning of 2019—including Apple TV+, Apple Arcade, News+, and Apple Card—were all extensions of its existing initiatives, from Apple TV and iTunes Movies to the App Store, Apple News, and Apple Pay. It wasn’t a desperate new pivot.

And it wasn’t customers or investors who were “confused” about Apple’s identity. It was analysts, bloggers, and media personalities who showed up at Apple’s services launch event and then mocked and derided the entire thing as a waste of their time because they didn’t get it. A big reason for that is that they’re so busy crafting their cynical, attention-seeking hot takes that they don’t bother to try to understand what the company is doing, and don’t even seem to care how well its initiatives are working compared to competitors because such details would only undermine their media narratives.

The reality was, as AppleInsider pointed out at the time, that these services were simply new forms of software. And Apple has historically used software—including iTunes and Apps—to prime sales of its hardware. Despite Apple’s focus on profits from new hardware —which now bundle in the costs of OS releases and many first-party apps including Pages, Keynote, iMovie and Garage Band —Apple is continuing to earn significant revenues from third-party sales, services, and subscriptions in addition to promoting the hardware that runs this software.

The real “confusion” about Apple is rooted in those cynical hot takes from pundits who have incorrectly claimed that Apple is “moving away from hardware to sell new services,” or that it is “transitioning away from iPhones,” or that its “iPad is collapsing” or perhaps “failing to erase all PC sales,” or any number of opinions that Apple has never itself endorsed, nor have ever really been true. Apple has recognized the value of software to sell hardware since the late 70s. 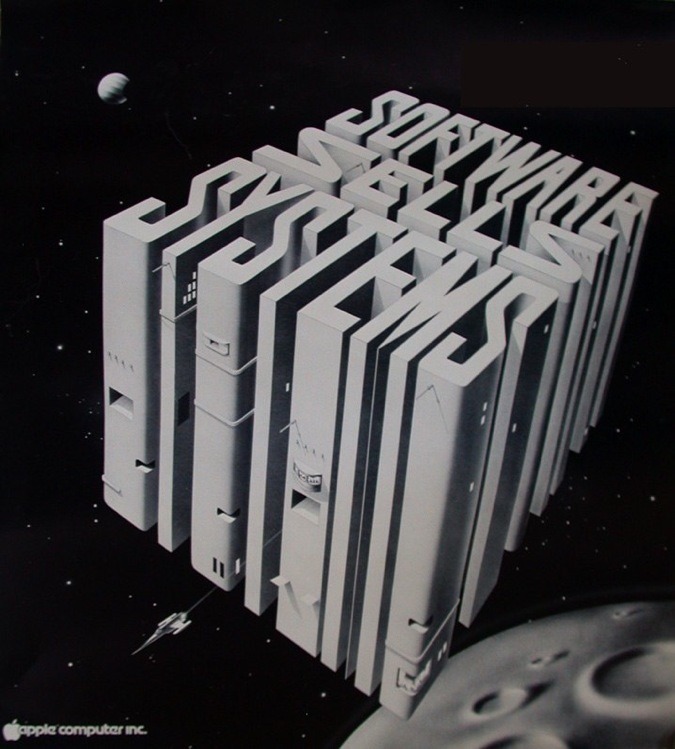 In 1979, John Couch was in charge of all software at Apple Computer. He commissioned this poster: Software Sells Systems

What is actually the case is that today’s Apple is a competent product machine —and has been for many years now —capable of inventing and developing new devices, initiatives and services and then effectively executing on its plans to deliver the things its growing customer base willingly chooses to pay for. This is —and for years has been —very clear from Apple’s solid financial results, which have continued on despite the extended malaise of the greater PC market, a severe economic downturn in China last winter, and the scary prospect of a shooting war between the U.S. and Iran just earlier this month that was supposed to be WWIII but turned out to be just another Twitter outrage cycle that couldn’t survive the week.

The latest crisis for Apple is today’s alarming spread of a serious flu sickening hundreds of people. This might affect Apple to some extent, but it will also affect its peers such as Huawei, which is not only located in China but has no ability to sell its products in the United States. Beyond that, no company in Apple’s field has performed with a respectable fraction of Apple’s competence, innovation and achieved its subsequent commercial results.

That’s why investors have finally rejected the asinine media narratives—led by bloggers such as Mickle at the Wall Street Journal—that Apple is an incompetent circle of infighting people who have no idea what to do next now that everyone has an iPhone, because China has finally copied one of its products for the first time and it’s all downhill from here. That was absurd to claim five years ago and downright insulting to keep insisting today.

It’s time for Mickle to start accurately covering Apple like the winning sports team it is, rather than with the contemptuous arrogance of a western media journalist disparaging a struggling emerging country.