Weekly poll results: Realme 5 Pro is a hit, steals the spotlight from the Realme 5

Realme has a future best-seller on its hands – but not two of them. The Realme 5 Pro got a very positive reception in last week’s poll – people are happy with the upgrades over the Realme 3 Pro, which launched earlier this year at the same price.

The upgrades are mostly in the camera department – going up to a 48MP sensor for the main camera and adding an ultra wide and dedicated macro cameras. The selfie camera dropped in resolution (25MP to 16MP), but the new sensor has larger pixels (0.8µm to 1.0µm). Added splash resistance and a slightly overclocked chipset just about cover it.

Reading through the comments, we only found one major complaint against the Realme 5 Pro – it’s not available worldwide. That’s a great problem to have for Realme and one that will soon be resolved. Indian CEO Madhav Sheth mentioned plans to expand to Europe and the US when we interviewed him back in April and the first steps are already being made.

Okay, there’s another problem for the Pro – some people are waiting for the Realme XT and its 64MP main camera and AMOLED screen. This one is still a while away, though. 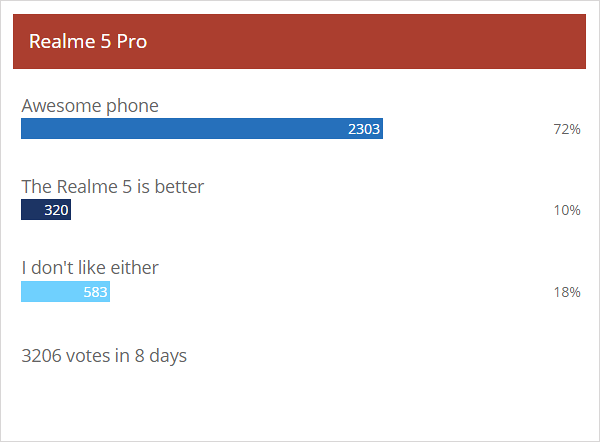 People are decidedly less excited about the Realme 5 – nearly two thirds of voters said they wanted the Pro instead. The Realme took a risk with the 5, it enlarged the screen to 6.5” while keeping the resolution at 720p+. Losing the high-res image sensor also hurts, a smaller 12MP sensor is nothing to get excited about.

The bad news for the Realme 5 is that a certain competitor offers a 1080p screen and 48MP camera at the same price point. Still, the Realme 5 is off to a good start, so it might prove to be a decent performer for the company, despite early skepticism. 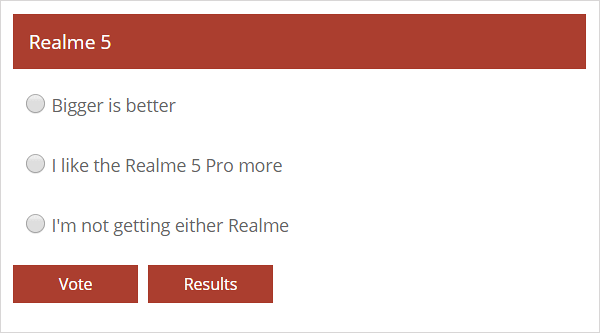 Are you in the path of Hurricane Dorian? Here’s what the major carriers are doing for you

Tariffs have begun on imports of HomePods, AirPods and desktop Macs

More users than ever are deleting the Facebook app & taking lengthy breaks, new…

Verizon rolls out 'My Numbers' feature for five lines on a single device,…

Messages I never asked for: The struggle with being a female online

Kingdom Hearts 3 doesn’t care if you’re not caught up, and that’s great