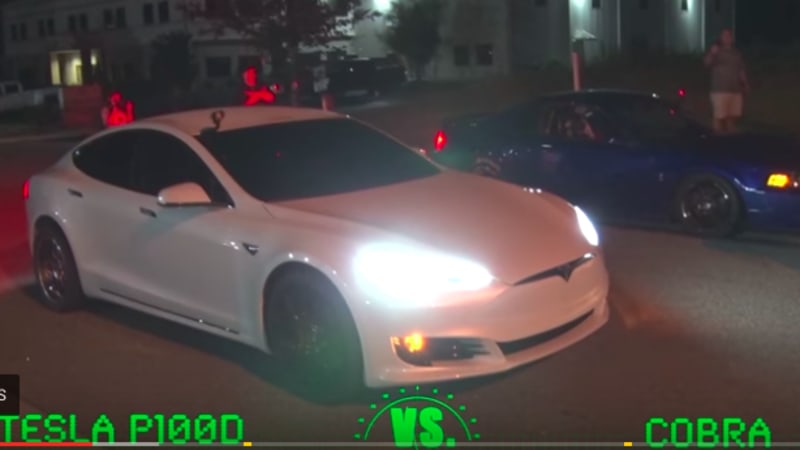 Warning: strong language is used in this video.

Taking a Tesla to a drag race is like bringing a taser to a snowball fight, it seems. The Model S is a heavy thing at nearly 5,000 lbs, so the Tesla Racing Channel has stripped the P100D of much of its interior to save some precious weight. In place of the original front seats are lightweight, aluminum Kirkey items, and even the frunk has been gutted; the guys say the white car now weighs in at 560 lbs less than a completely stock example. But in every other respect the P100D is stock, unlike the fossil-fuel burning, sometimes nitrous cars it faces in this drag challenge.

And one by one, the racers with their highly-tuned combustion engines lose to the remarkably laid-back guy behind the Tesla’s wheel. In Ludicrous mode, the silent killer leaves the Foxbodies and other Mustangs behind, no matter what modifications they carry, or which line they choose – a particularly testy Mustang driver wants to try both sides to get better traction, to no avail. Could an all-wheel-drive challenger, the Nissan GT-R match the AWD, 760-horsepower Tesla? Even the Tesla driver is slightly intimidated by the “Godzilla”, saying “I’m alright with it if I lose”. But no – the Tesla smokes the Nissan. And it doesn’t even use that much charge while winning. The video, with its humorously trollsome attitude and oftentimes strong language is excellent Wednesday watching.

Step Up to the Plate in MLB Tap Sports Baseball 2020

Oppo F11 Pro in for review

So, when will your device actually get Android Oreo?

Latest report indicates iPhone 11 will include three cameras on some 5.8-inch and…

Want your website stats to soar in 2019? Here are four options to consider