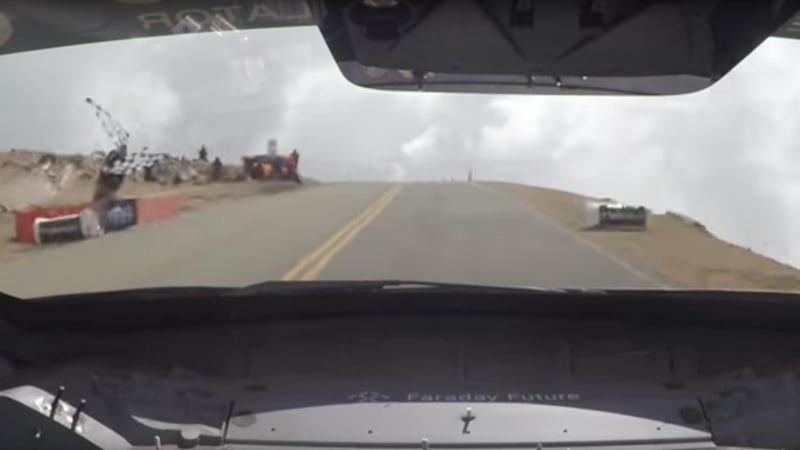 As Faraday Future continues to develop its FF91 luxury EV, the company has been putting the car through rigorous dynamic testing. The biggest challenge so far has been to tackle the 2017 Pikes Peak International Hill Climb. The FF91 took on the Colorado mountain in the Exhibition Class. It set a record for the fastest production EV up the hill, with a time of 11:25.082.

The word “production” is used pretty loosely here, as the car that raced to the clouds is a 1,050-horsepower beta prototype, and the FF91 hasn’t gone into commercial production yet. Driver and principal engineer Robin Shute said the car had some safety modifications, as well as smaller wheels and tires. The car experienced a “small technical difficulty” during the climb, wherein Shute had to “stop the car and cycle it to continue.” You can see that take place at about 10:45 in the video above.

Despite the problem, Faraday Future was able to beat the previous record, set by Go Puck’s Tesla Model S in 2016, by more than 20 seconds.

“My goal was to push the FF91 beyond what we thought she could do,” Shute said. “We were able to identify key battery-pack relay and system seal issues that will directly result in improvements in the production process. That’s what makes this a successful event for Faraday Future.”

Faraday Future is still continuing its video series about the development of the FF91 leading up to the Pikes Peak race, so we can expect more official video from the event to come from the automotive startup in the near future. You can see the company’s latest video here.

How CRM Software For Real Estate Contribution In Its Growth

Oppo A1 quietly unveiled in China, goes on sale April 1

Hands-on: ‘Beat Saber’ is Every Bit as Fun as It Looks

Insert coin: Carvana continues to open car-vending machines across US

How to Check Which GPU Is Installed on Linux

Beyond This Is Us: 12 TV Shows That Premiered After the Super Bowl

What happened to our VR future?