Turbocharge your burnout with the 2018 Ford Mustang EcoBoost's line-lock 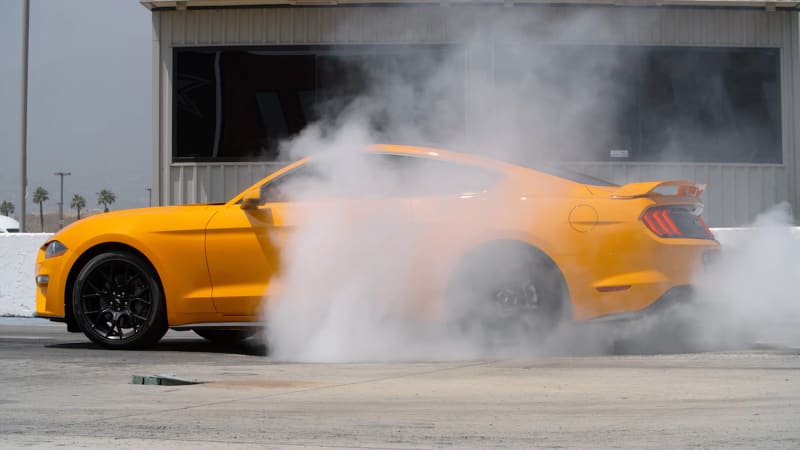 If you’ve always wanted line-lock in your EcoBoost Mustang so it could turn tread into smoke just like its V8-powered GT stablemates, we have great news: Ford’s made it happen. Well, for 2018 at least. Even better news is that it’ll be standard in all Mustangs, period. That means you don’t have to buy a higher trim or a special performance package to get it.

Neither will you be limited by transmission choice. Both the 10-speed auto and the 6-speed manual will come so equipped. The system is activated through the instrument cluster menu using steering wheel controls. After it locks up the front brakes, you’ve got 15 seconds to vaporize some rubber before the system deactivates.

Is this something that EcoBoost owners have been signing petitions about? We don’t have the data about customer preferences here, but our take is that this has more to do with normalizing the Ecoboost ‘Stang as a legitimate V8 alternative than to satisfy a hyper-vocal owner subset. Ford wants the EcoBoost to succeed quite badly. It’s a good standard-bearer for Ford’s EcoBoost program in general, it’s good for the company’s CAFE numbers, and it’s probably good for the younger buyers Ford wants to attract.

In other news, the available digital instrument cluster, which is a very cool piece of kit, now includes a little animation of a Mustang burning rubber when you activate the line-lock function. This may tip wafflers over the edge, right? Right.

You’ll see line-lock on new Mustangs at your local Ford dealer later this year. Unfortunately it doesn’t look like Ford will offer retrofit kits for older EcoBoost cars at this time.

Sea of Thieves Has a Very Smart Approach to Server Size

How to Create an Apple ID on Your iPhone or iPad

Keep Talking And Nobody Explodes Is Getting A Free Weekend

The Best Tools For Working in Your Yard and Garden