President Donald Trump on Monday commented on a joint contact tracing project from Apple and Google that will harness iOS and Android devices to track the spread of COVID-19, saying that while the system is “amazing,” it raises unspecified “constitutional problems.” 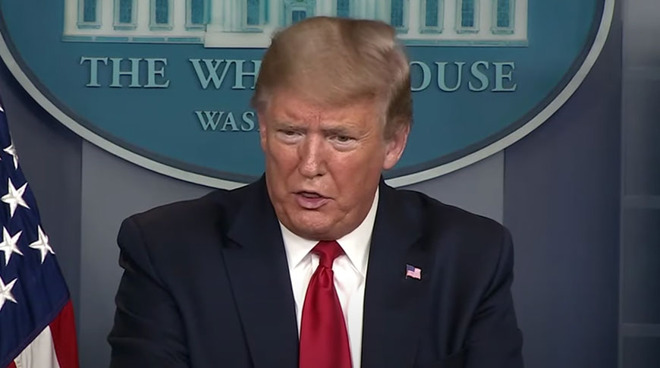 Trump was asked about the new contact tracing method during what has become an almost daily White House press briefing from the Coronavirus Task Force.

Announced last week, the Apple-Google partnership employs specialized APIs that use Bluetooth communications to determine the proximity between iOS and Android devices. Using anonymized identifiers stored locally on a host device, the system maintains a rolling database of contacts, which can be cross referenced with server-side information to pinpoint potential exposure to users with COVID-19.

“Well it’s an amazing thing, but a lot of people have some very big constitutional problems with it, you know that,” Trump said. “It’s an amazing thing. And it would be, actually, as you know other countries are thinking about using something similar, but not as good.”

When asked if he would prefer Americans use another tracking method, like those being put to use in other countries, Trump deflected, saying he didn’t “want to get into that because we have a whole constitutional thing.”

“We have more of a constitutional problem than a mechanical problem, but we will be making a determination on that,” Trump added. “That’s something we’re going to be discussing with a lot of people over the next four weeks. That would be a very accurate way of doing it, but a lot of people have a problem with it.”

The last statement was an apparent reference to Apple and Google’s contact tracing initiative.

In March, a number of major European wireless carriers agreed to share customer geolocation data with the European Commission in a project designed to track the spread of COVID-19. Critics voiced concern over the potentially intrusive nature of the measure, saying a centralized database of location information could easily lead to a surveillance state. Government officials, however, noted all data collection operations are anonymized and the resulting information will be destroyed once the crisis is averted.

Trump failed to specify what concerns are being raised about the Apple-Google solution. Both companies have made clear their intent to maintain high levels of transparency, privacy and data protection if users decide to participate in the opt-in program.

Explained by Apple and Google earlier today, the contact tracing system requires explicit user consent at multiple stages in the process, does not collect personally identifiable information, anonymizes collected Bluetooth identifiers (which are periodically regenerated), temporarily stores contact lists on-device, and only shares information with public health authorities upon user request. Neither company has access to the data and program is to be disabled once it has served its purpose.

Apple and Google plan to initiate a first phase of the contact tracing program — developer APIs and servers for use with authorized apps — in May, to be followed by deeper operating system integration at a later date.