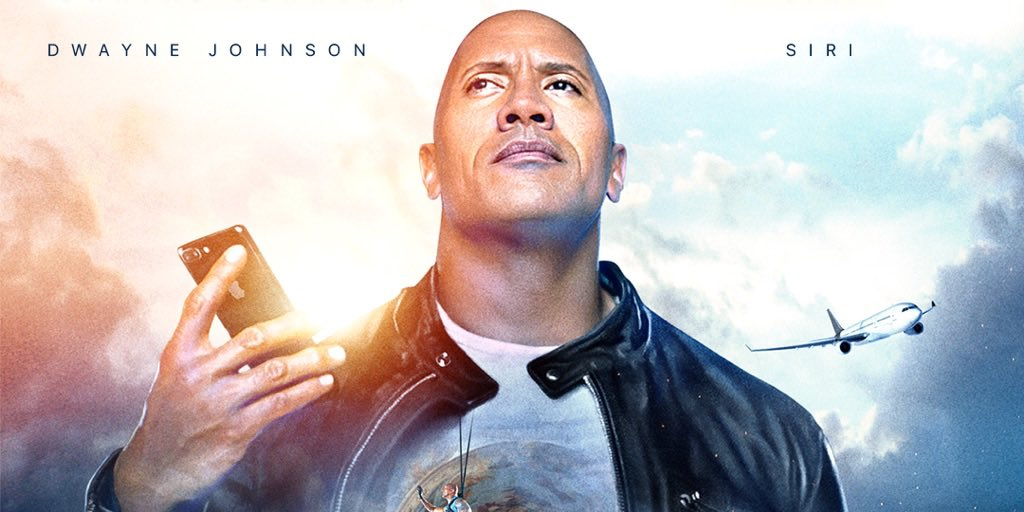 In case you manage to drag yourself out of the ongoing Game of Thrones craze today, you might be in for a treat: superstar Dwayne ‘The Rock’ Johnson just tweeted that he’s joined forces with Apple’s voice assistant, Siri, for his next film, which airs on the company’s YouTube channel July 24 (that’s today!).

It’s not the first time Apple’s flirted with celebrity partnerships: last year, it teamed up with Taylor Swift to create 60-second commercials that aired on Twitter and Instagram, and promoted the Apple Music streaming service.

Teamed w/ @Apple to make the biggest, coolest, sexiest, funnest (is that a word?) movie ever. Drops TOMORROW!#ROCKxSIRI#DominateYourDay✊? pic.twitter.com/STwlCPsVUh

It isn’t clear exactly how long this movie will be, but from the poster art you can see above and The Rock’s Facebook post about it, it’s safe to assume there will be a shit-ton of action, explosions and stunts.

Describing the flick, The Rock said that it’s “the BIGGEST, COOLEST, CRAZIEST, DOPEST, MOST OVER THE TOP, FUNNEST (is that even a word?) movie ever,” and that the goal was “to motivate you to get out there and get the job done.”

The Rock X Siri: Dominate Your Day arrives on youtube.com/apple on July 24. Let us know your thoughts about it in the comments.

Pick the perfect Bluetooth keyboard for your phone or tablet [Deals]

tvOS 13 is Here With Apple Arcade, Multi-User Support and More

‘Elite Dangerous: Beyond’ Fourth & Final Chapter Coming to VR in Beta This Month

iOS 13 will bring a huge dark mode update to iPhone

How to Check Different Time Zones on iPhone and iPad

What Comics to Read Before Doomsday Clock

What Does It Mean for a Photo to be “Sharp?”