HBO’s show Silicon Valley entertains with tales of the pervasive startup culture of California’s San Francisco Bay Area. While virtual reality has graced the show previously, season four is bringing it closer to the fore, with the show’s main characters becoming intertwined with the eccentric Keenan Feldspar, a fictional Silicon Valley wunderkind developing a pair of virtual reality goggles. A wild looking prototype version of the fictional headset seen in the eighth episode of this season turns out to be not a prop, but an actual prototype of a product that’s on the market today.

Silicon Valley shines in a large part because of how accurately it portrays the trials and tribulations of startup life in the Bay Area. The minds behind Silicon Valley have done their homework to show believable startups and their fictional tech. In the last few years, virtual reality has been one of the hottest trends in the startup and venture capital space, and the writers of the show have taken clear notice.

While Rift and Gear VR headsets have popped up here and there on the show, the latest episodes have brought the topic of VR front and center. The character Keenan Feldspar is developing a virtual reality headset, and his carefree enthusiasm lures the Pied Piper crew to try out his latest demo.

The wild-looking headset we see used in the show looks as if a prop designer had some fun designing a kitbashed goggle-shaped VR headset with exposed circuit boards and 3D printed parts. But what you’re looking at is actually a real prototype of an HMD called the Glyph, developed by a company called Avegant. 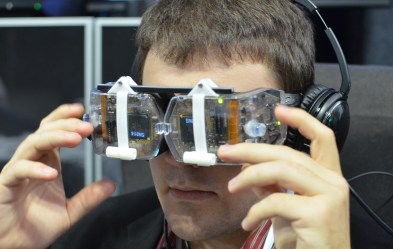 Though it looks quite futuristic, the prototype is relatively old. I got to try it myself back in 2013 when Avegant was developing the then yet-to-be-named Glyph, a personal video viewer which doubles as a pair of headphones and is available today for $ 400.

And while the prototype Glyph is not technically a VR headset—as the limited field of view makes it suitable only for non-immersive media—Avegant has lately shifted their focus to the immersive HMD space, and is presently developing “a new method to create light fields” for future headsets.

The prototype Glyph headset is not the last we see of Avegant on Silicon Valley. In the next episode when the Pied Piper crew attends Hooli-Con, careful viewers will spot an Avegant Glyph booth in the background of one of the shots. Oculus and 360fly booths can also be spotted.

Silicon Valley’s interest in virtual reality doesn’t end there. The show’s VR wiz kid, Keenan Feldspar, bears a striking resemblance to Oculus founder Palmer Luckey (if you were on the fence, the Hawaiian shirts are the dead giveaway). Luckey himself recently changed his social media profile pictures to a photo of Feldspar.

And to make things even more meta, the show has also crossed into non-fiction. Thomas Middleditch himself, who plays Silicon Valley’s main character, was the host of the Proto Awards, an annual virtual reality award ceremony, where he pitched a zany idea for a VR game, as we reported from the 2014 event:

One of the more hilarious moments of the night was when Middleditch pitched the audience an idea for a VR game: a simulator of Middleditch’s bathroom where users would sit on the toilet and have to console his small but bossy dog. What seemed like a joke at first became all too real; for reference material he actually pulled up a video, taken while on his toilet, of his dog coming into the bathroom and growling until being pet.

How long virtual reality will remain a central theme of the show is unclear, but in the meantime we’re enjoying the cameos and homages to companies and products within the real VR industry.

Assassin’s Creed Rebellion is better than Odyssey — fight me

Jammer Lets You Get Your Groove on as Your Own DJ

Enterprise IoT adoption to hit critical mass by 2019, but security remains a top…

The Aventador SVJ “will blow your mind” Lamborghini says

How to Make a Group FaceTime Call on iOS 12