Apple is considering alternative ways to mount sensors, indicators, switches, and other elements to create devices and components like a flexible display, including attaching parts to an elasticated substrate that is capable of transmitting data between individual components. 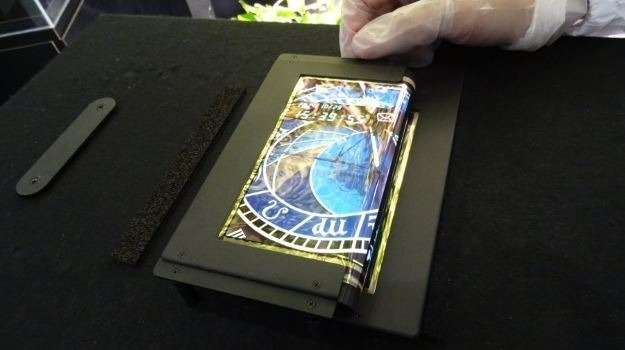 Granted on Tuesday by the U.S. Patent and Trademark Office, the patent for “Electronic devices with soft input-output components” describes ways that a stretchable and deformable elastomeric substrate layer could be used as a form of circuit board for a device. Rather than using wires or a rigid board as typically used, the substrate would be flexible, so not bound to a specific shape, and capable of being stretched in various directions.

The substrate is suggested to have signal paths running between where components are mounted on the surface, with holes potentially able to be added between the paths to create a form of mesh material, to aid stretching, or to allow it to fit into the desired design aesthetic. Areas between signal paths could also be made much thinner, saving on material usage and weight, as well as for additional stretchiness.

The components are attached to the elastomeric substrate by pre-placed interposers with solder pads. These interposers would enable the signal to transfer to the connected part via the solder pad.

As for the components themselves, Apple suggests that various sensors could be attached to the material, as well as combinations of micro LEDs and photoluminescent material. This last element effectively suggests the use of the material to create a flexible or even stretchable display.

The printing of thin-film circuitry on the substrate is also highlighted as a possibility, for controlling LEDs in a stretchable display or for controlling other interface elements.

In arguing the concept’s case, Apple suggests it to be “challenging” to create an input-output interface into a device, with reliability concerns, form factor considerations, and other elements that could make it “difficult or impossible” to use existing technologies. For flexible devices, Apple reasons traditional displays and touch sensors used in these sorts of products “may be subject to stress-induced failures.” 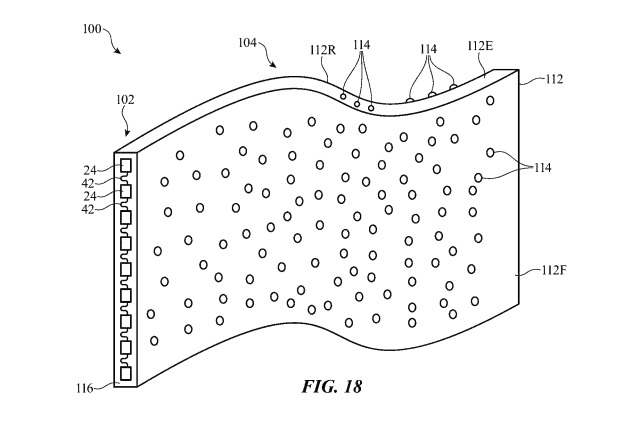 The potential for a flexible display has been explored by Apple many times in the past, with a number of patents and applications in recent years dealing with the subject. Earlier this month, another patent granted to the company explained how a flexible screen could be folded in a bendable smartphone without damage.

Apple has also invested heavily in microLED display technology, one that is effectively a display panel using tiny LEDs on a sheet, which could feasibly be used for a flexible screen, as well as offering potential power savings and reducing the overall screen thickness.

In October 2017, Apple was rumored to be working with LG to produce a foldable OLED iPhone by 2020. At around the same time, Merrill Lynch analyst Wamsi Mohan wrote to investors suggesting a similar launch timeframe for the device, speculating such hardware could “double up as a tablet,” saving the user from using two mobile devices.

Apple regularly files patent applications with the USPTO, and the publication of an application or a granting of a patent is not necessarily a sign that Apple is actively working on using the technology in its products. Even so, the number of patents and applications, as well as prototypes and concepts by Apple’s competitors, suggests smartphones with flexible displays could be arriving in stores within a few years. </span>

First Shift: FAA bill could take AVs along for the ride

First live images of the iPhone 8 back surface

Review: Marshall Kilburn II is a rugged portable speaker for your inner rocker

Geek Trivia: The Design of Apple’s FireWire Cable Was Influenced By What Unlikely…

Explaining the Complicated History of Shazam

Environmental crime is a huge invisible problem — IoT will expose it