The Sony G8341 was spotted again, this time in Geekbench scores. The benchmark confirms the suspected Snapdragon 835 chipset and 4GB of RAM, though it only showed Android 7.1 Nougat.

Other leaks about this phone – supposedly the Xperia XZ1 – suggested it will run Android O instead. Considering that Google is still tinkering with the OS, we wouldn’t jump to any conclusions yet. 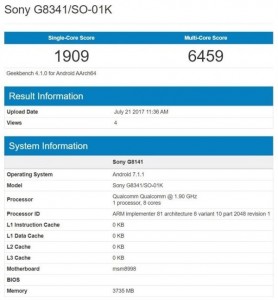 By the way, there’s another phone – G8441 – which is expected to be the Xperia XZ1 Compact with a 4.7” 720p screen as is the tradition. We’ll keep our eyes peeled for these and other Xperias at the upcoming IFA.

Thanks for the tip, Anvin!

ARCore is Google's answer to Apple's ARKit – augmented reality for the…

Facebook comes up with its own TikTok/Vine clone, now out on iOS and Android in the…

Will the computer virus that attacked TSMC delay the 2018 Apple iPhone launch?…