The popularity of Beats headphones has gotten a lot of people into bass heavy sound. But even before Beats existed, Sony had a bass fetish. Going all the way back to the days of the cassette Walkmans, those who had one will know about the existence of this little switch called MEGABASS, which was like nitro boost for your music. 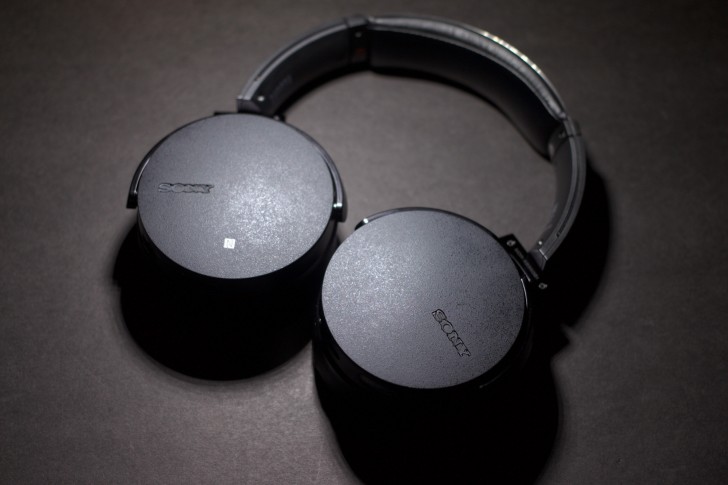 But it’s not the 90s anymore and more and more people are being introduced to high fidelity, high resolution music that is all about staying true to what the artist intended than wavy equalizer curve music. But Sony hasn’t yet gotten over its fondness for big bass and in fact has an entire series of audio products designed around just having lots and lots of bass.

The Sony XB950B1 is one of them. Part of the EXTRA BASS series, the XB950B1 is a pair wireless Bluetooth headphones that has a whole button on the side just turn the bass up even further. 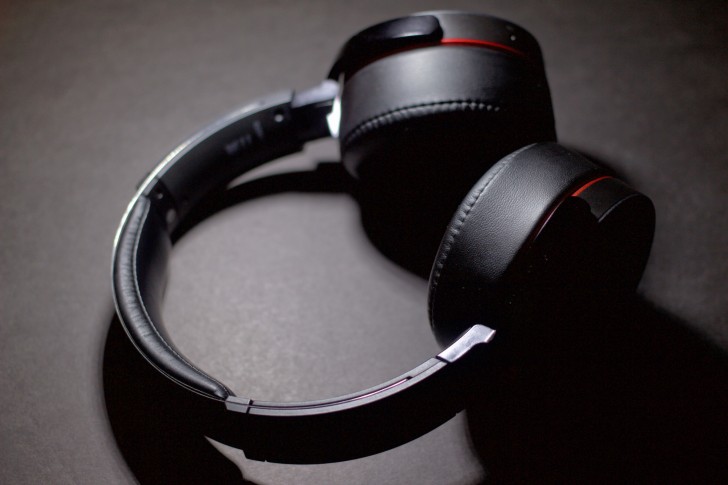 The design of the XB950B1 is similar to some of Sony’s recent headphones. It has a prominent wide headband design with perfectly circular ear cups that is a common design feature of many of Sony’s headphones. The color scheme is overwhelmingly black but with some exposed steel at the top of the headband and red accents around the ear cups that looks perfectly encapsulates Sony’s understated yet elegant design language. If you like something vibrant, however, they do come in an all-red and all-blue variant.

Even though the ear cups are perfectly circular from the outside, the foam padding has oval cutouts for the ears. The leatherette earpads have thick padding and completely surrounds your ears. The padding isn’t very breathable so expect things to get stuffy in there during summers. 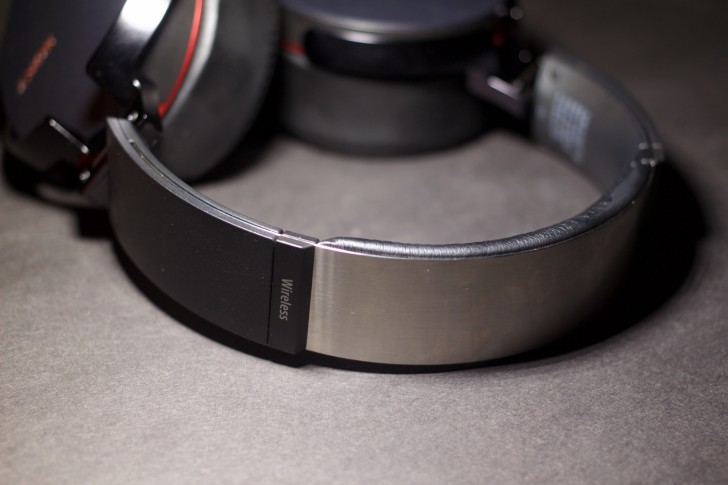 The earcups have controls on either side. The left side has the power button, bass effect button, microUSB for charging and a headphone jack for wired audio. On the right side are controls for playback and a volume control. All the controls are well laid out, easy to use, and work well.

The right earcup also houses the NFC sensor, which can be used to quickly pair your Android smartphone.

The XB950B1 is a comfortable pair of headphones. The earcups can get stuffy in hot weather but apart from that they aren’t too heavy and not much of a bother when sitting around your noggin. It’s just that the earcups are a bit too thick and stick out a good two inches out from the side of your head, which doesn’t look all that great while walking around with these in public. 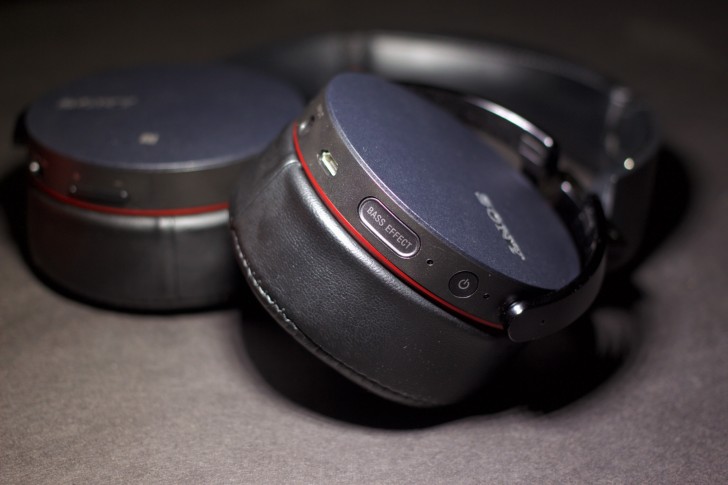 The XB950B1 are also compatible with Sony’s Headphones Connect app, which lets you control the level of bass boost along with the surround sound effects. The app is available for iOS and Android but if you plan to use the headphones with a computer or something like the Apple TV then you are out of luck.

Listening to the XB950B1 for the first time with the bass effect turn on maximum is like listening to a party happening at your neighbor’s house. All you can hear is the bass pounding in your ears and not much else. There is not much weight to the mids and the highs aren’t really there at all. 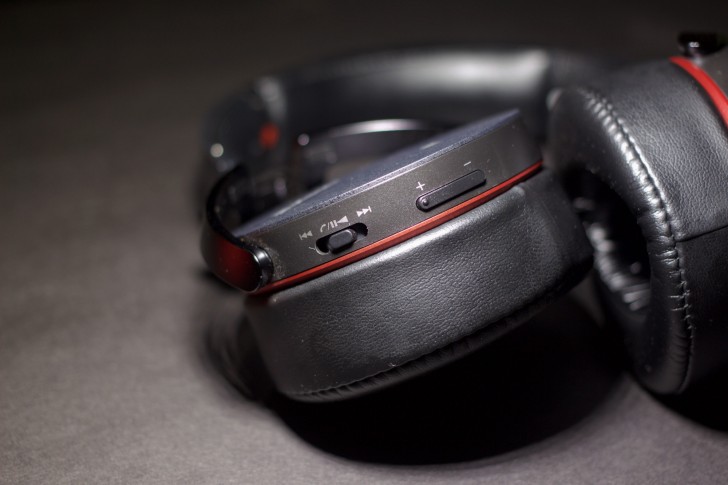 Turning off the bass effect does bring the low end down to more sensible levels. This is when you realize that the mids and highs weren’t really getting overshadowed by the bass before, because they are just bad in general. Even with the bass effect turned off the sound is like having treacle in your ears, and not in a good way (if there even is a good way). Imagine if one day suddenly your lossless FLAC files were replaced with 64kbps MP3 files and you’d know what the sound quality is really like.

The bass is made the highlight here but there’s nothing particularly good about it. It’s lumpy when the bass effect is turned off and when on it’s just mind-numbingly overpowering to the point where it gets fatiguing to listen to for more than a few minutes. 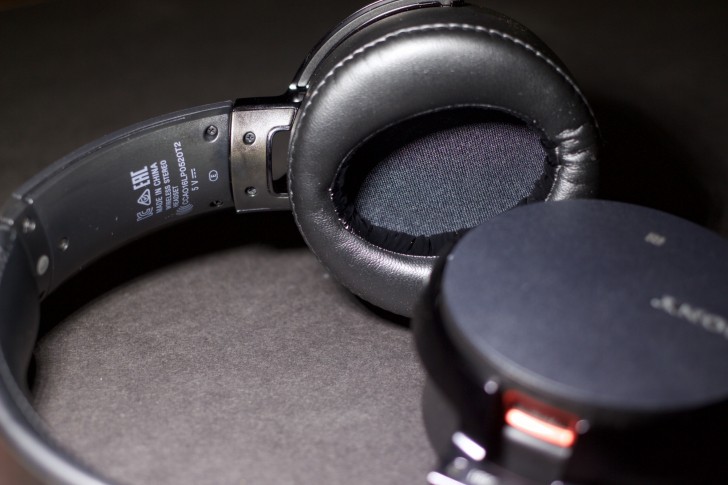 The Headphones Connect app does help here a bit. While the switch on the headphones will only turn the bass all the way up or turn it off entirely, the app lets you dial in the amount of bass you want. It even lets you take it down below zero for even less bass. Unfortunately, while that does help solve the bass problem, it brings the mids and high even more sharply in focus, or rather their lack thereof.

The only genre of music these headphones somewhat work with is trance and even then it left me wanting for more. All the other genres just make it fall flat on its face as the sound processing just does not have what it takes do justice to those genres. There is no clarity, no detail, no finesse to the sound. The stereo imaging and soundstage is so poor the headphones almost sound monophonic. Most of the audio just feels like strapping two subwoofers to your skull. For whatever reason, extra bass has come at the cost of other frequencies and it couldn’t just be a well-rounded sound along with some extra bass. 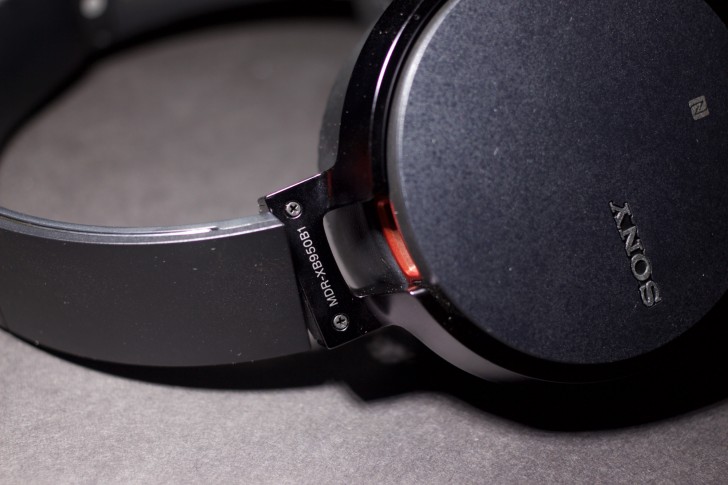 The Sony XB950B1 is a good-looking, well-built, comfortable pair of wireless headphones that’s not too expensive either. Unfortunately, it lacks where it matters most, and that is sound quality. When it comes to its mainstream audio products, Sony has a severely distorted view of what counts as good audio quality and that shows itself again in the XB950B1. Despite its rich heritage in audio products, Sony has decided to give it all up and focus on making Beats knockoffs.

If you like constant bass pounding with very little of anything else, then I suppose the XB950B1 might work for you. People with better taste in sound will have to look elsewhere.

Palm-branded smartphones could return this year

Something For The Weekend: Oculus Summer Sale Goes Out With A Bang

Secrets to multitasking like a pro in iPadOS 13 [Video]

9 things you need to know about the 2018 Lincoln Navigator

Fix the Glitches and Save the World in Reed

Location-based Snaps can now book a table, an Uber, and more with Context Cards

PSA: If you’re experiencing excessive battery on iOS 11.4, it’s not just you