The new Satechi aluminum hub is made to precisely fit underneath the Mac mini and also act as a stand. It brings a series of ports, including a micro SD card reader, to the front of the computer. 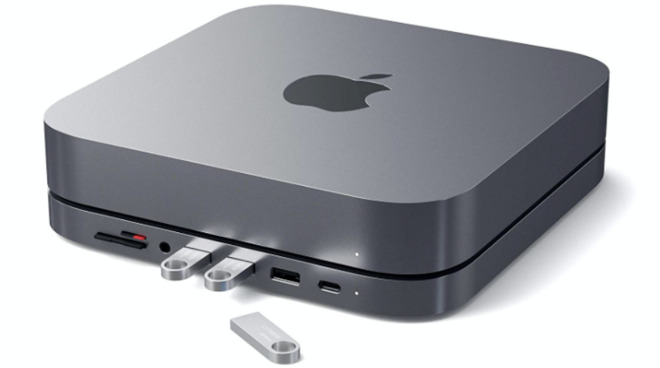 Technology accessory maker Satechi has released the Type-C Stand and Hub for the 2018 Mac mini. It’s a slimline hub that brings a series of ports to the front of the 2018 Mac mini, while also raising the computer off the desk.

Both sized and colored to look part of the Mac mini, the Satechi hub brings a micro/SD card reader to the Mac mini for the first time.

The hub is connected at the rear of the Mac mini by a built-in USB-C cable that plugs into a Thunderbolt 3 port.

Via that connection, it replicates some of the Mac’s rear connectors and presents them in a more convenient location at the front of the machine.

So without reaching around or moving the Mac mini, users have quick access to a single USB-C port, three USB 3.0 ports, the micro/SD card reader, and a 3.5mm headphone jack.

Satechi says that the hub and stand is also fitted with built-in air vents to regulate the temperature of the unit when multiple devices are plugged in at the same time.

The Type-C Aluminum Stand and Hub for Mac mini costs $ 79.99 on Amazon.

Satechi is a longstanding accessory manufacturer, and recently launched a pair of 4K60 compatible USB-C Multimedia Adapters and an aluminium mouse.

Artificial intelligence algorithm can learn the laws of quantum mechanics

How to Schedule Sending an Email in Gmail

Here’s how to keep your Instagram creeping on the low

10 things we learned from the 2018 Paris auto show

WhatsApp founder, Brian Acton, says Facebook used him to get its acquisition past EU…

Hands-on: LetinAR Brings a Larger FOV & Depth of Field to AR with ‘Pinhole…