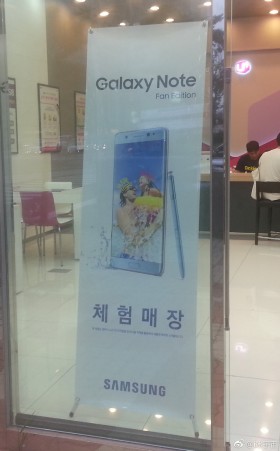 Many, many months have passed since the Galaxy Note7 was discontinued by Samsung due to those pesky explosions. After careful consideration, the company decided to refurbish its trove of Note7 units, complete with a new (smaller) battery that should not catch fire. Throughout this month various reports claimed that the refurbished devices would be sold under the name Galaxy Note FE (for “Fan Edition”) in South Korea starting on July 7 – or later.

However, a new development spotted today comes to sort of confirm that July 7 may indeed be the release date for the Note FE. The picture you can see to the left was shot in a Korean store, which is already advertising the upcoming device. That clearly means the launch is very near indeed, and July 7 is next Friday after all. So it all makes sense.

The Note FE will come with a 3,200 mAh battery (compared to the explosion-prone 3,500 mAh cell in the Note7). Otherwise it will be identical to the Note7 in terms of specs. It has been rumored to arrive with Bixby on board, though, at least in Korea. Samsung is reportedly preparing 450,000 Note FE units for its home market, where each one will be sold for around KRW 700,000 (that is $ 611 or €536 right now).

The Galaxy Note FE will subsequently be sold in other markets as well, but exactly when it will leave South Korea isn’t clear yet.

Spectacles sequel could arrive as early as this week: report

LinkedIn to launch Talent Insights, a new analytics tool, as it dives deeper into…