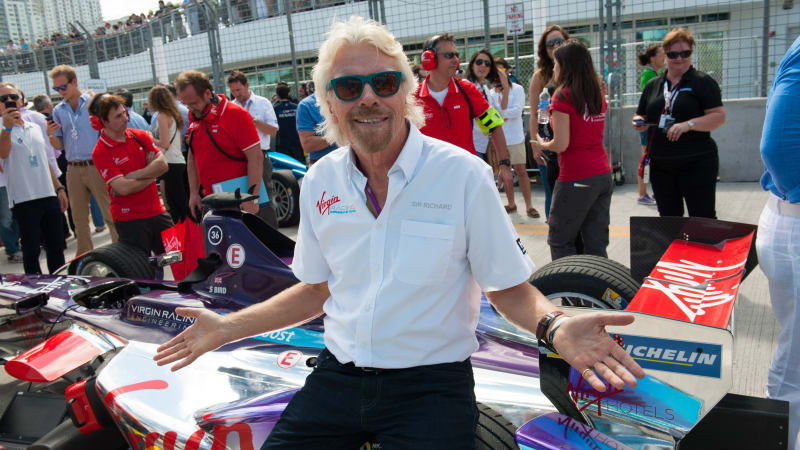 The next Formula E race weekend will be a double-header in New York City on July 15-16. DS Virgin Racing driver Jose Maria Lopez will be absent, as he’ll be driving in the World Endurance Championship’s 6 Hours of Nürburgring race. Filling in for him alongside Sam Bird will be British reserve driver Alex Lynn. That leaves a need for a new reserve driver for the New York City ePrix, a duty that will be fulfilled by none other than billionaire Virgin Group founder Sir Richard Branson.

That means the team’s entire lineup for the race will be made up of British talent, and Branson is excited to fill the role. “I heard about the situation at the team and offered my services!” Branson said. “As you know, I’ve always loved a challenge, and Alex, Sam, and myself are the three plucky Brits ready to take on New York.” The 66-year-old business magnate said he has arranged for some testing time in the car to prepare himself in case he’s called up to race.

As for Alex Lynn, the DS Virgin Racing Team Principal Alex Tai has faith in the 23-year-old driver. “I’ve long been an admirer of Alex as a driver, so it will great to see what he is capable of and how quickly he can adapt to the competitive world of Formula E,” Tai said. “As it’s a new track, it will be a level playing field for all drivers, so, combined with our quick car, hopefully we can achieve the results we deserve.”

He added, “And besides there’s always Richard to fall back on!”

The New York City ePrix will play out on the streets of Brooklyn. Race one will take place on Saturday, July 15, with the second race scheduled for Sunday, July 16.

Automakers condemn use of monkeys in diesel fumes study

Samsung announces ‘Lite’ versions of the Galaxy S10 and Note 10

How VR Is Treating People’s Fear Of Heights

Video: Get Ready To Crack The Case With Detective Pikachu In The Latest Trailer

Ahead Of Destiny 2 Launch, You Can Now Link Your Blizzard And Bungie Accounts

Round out your Christmas shopping with cloud storage, VPN protection and more [Deals]

Apple Watch Series 4 review roundup: This is the one we’ve been waiting for