So if the Realme 6 is the new Pro, then what about the 6 Pro? Well, judging by the pricing, which starts at INR 16,999 in India, it should replace or at least offer an alternative to the Realme X2, which is currently selling for the exact same price. And you may think that the Realme X2 is the more sensible solution but there are a lot more things to consider here because, just like the vanilla Realme 6, the Pro model offers great value and a wide set of features that allow it to punch slightly above its class. 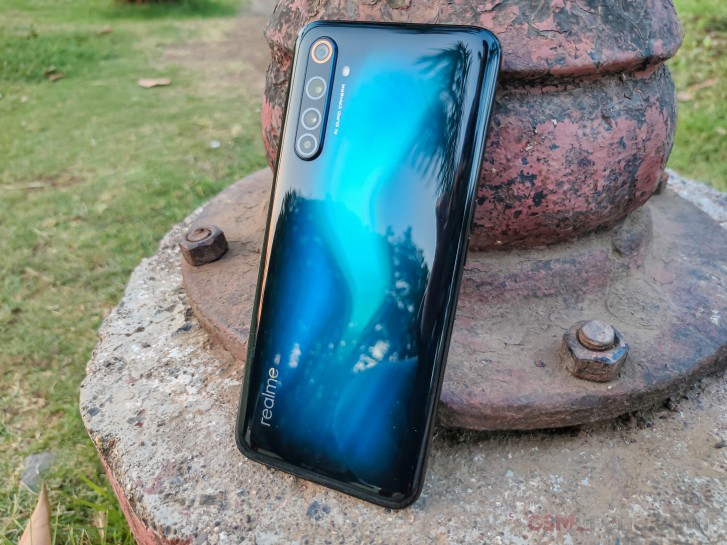 If you are eyeing the Realme 6-series, which one is for you? If you are looking for a bigger screen, more powerful SoC and the full set of focal lengths (wide, ultra-wide and telephoto), perhaps you’d have to pay a little extra and opt for the Realme 6 Pro.

While the Realme 6 stops at macro, the Pro swaps the depth sensor for a proper telephoto lens covering all bases – wide, ultra-wide, telephoto, and macro. In fact, this is one of the few devices having this particular selection of cameras, even when we consider higher-end handsets.

Additionally, the device brings the trendy high-refresh rate feature to the masses and by doing so, it’s also giving you a large-sized 6.6-inch display for a better multimedia experience. Which might be obstructed by the dual punch-hole design as it houses a standard wide-angle cam and an ultra wide-angle lens if you are deep in the selfie game. 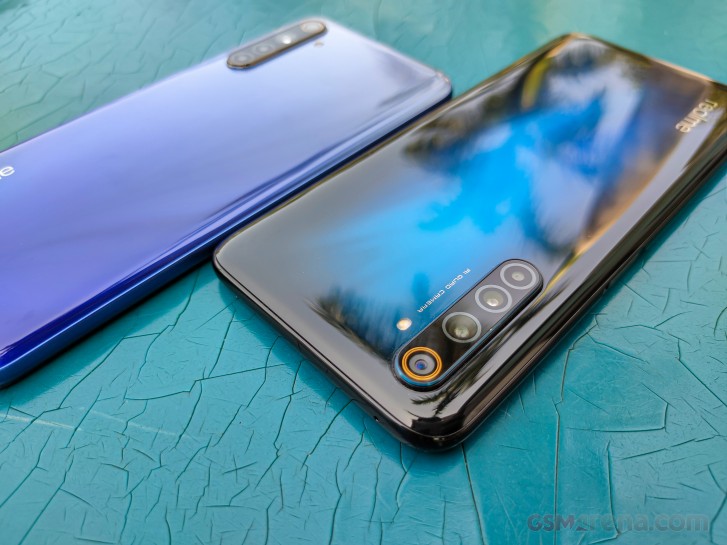 The main differentiating factors of the two phones are the camera and screen size, so it’s really up to you to decide if the price difference is worth it. Here are our initial thoughts to help you decide until we release the full review.

As we already pointed out, there aren’t many design differences between the Pro and the non-Pro Realme 6, but there are some key disparities design-wise. First off, the Realme 6 Pro doesn’t feel cheap at all and offers a slightly better feel than the vanilla model, and that’s mostly because of the glass back panel. Yes, the Pro swaps the plastic back for a glass one, while the front bumps up the Gorilla Glass version to 5. The middle frame remains plastic and Realme doesn’t say if there’s any protection on top of the back glass, so we assume there’s none. 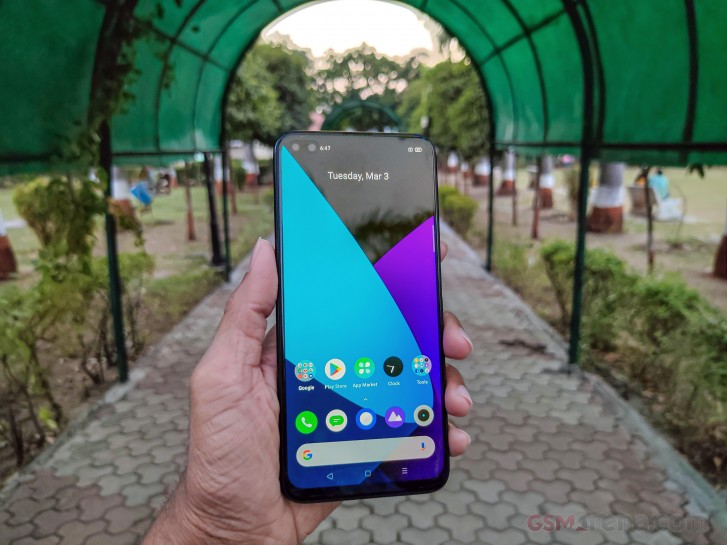 Interestingly enough, Realme goes into detail about the waterproofing of this phone and makes us wonder if it’s in any way different than the vanilla Realme 6. Allegedly, the phone relies on three different layers of waterproofing – first, there’s glue that protects the internal components; secondly, there’s silicone gel sealing all the holes around the phone; and finally, waterproof rings tightly seal the SIM card slot. Again, the phone doesn’t have any official IP rating so Realme can only confirm that the phone would do just fine under the rain or when splashed. 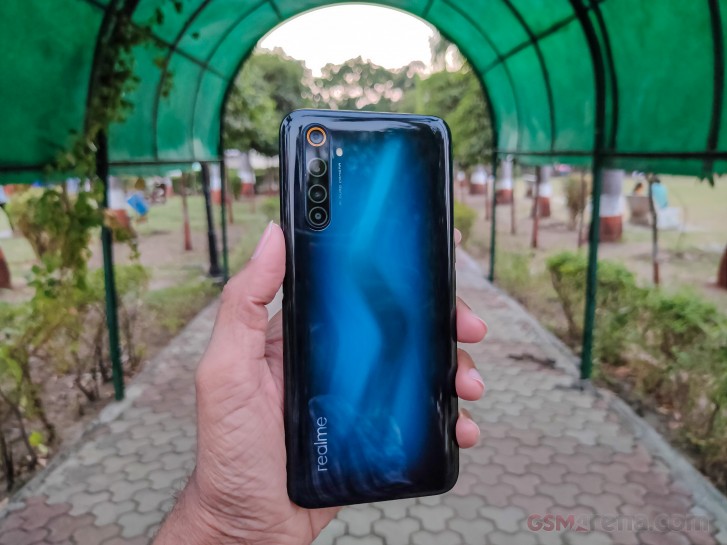 What gives away the Realme 6 Pro the most is the dual punch-hole on the front and the gradient of the back glass sheet. Since the Pro has a standard wide-angle and ultra wide-angle selfie cams, it requires a bigger punch-hole positioned in the upper-left corner of the display. And as for the gradient, Realme calls it Lightning Blue, in our case, but there’s also the Lightning Orange and Lightning Red. The standard Realme 6 comes with the Comet gradient. 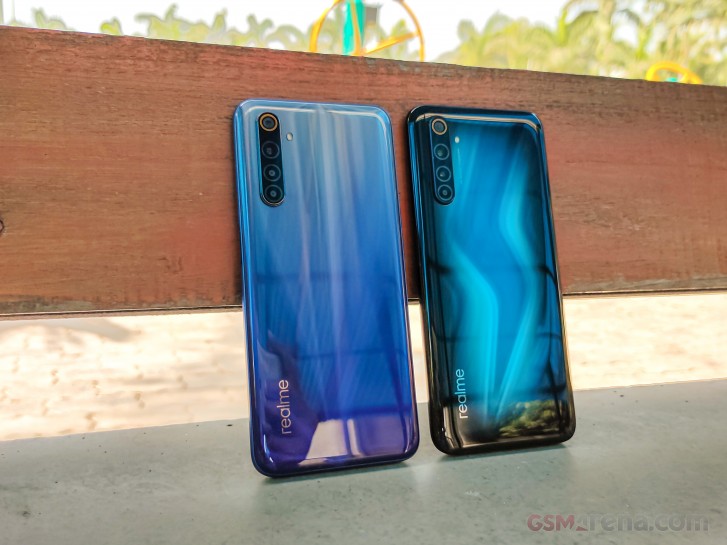 What’s interesting is that this particular color or material has the fingerprints and smudges less visible than on the standard Realme 6. Perhaps the glass here is somewhat more resistant to smudging.

The side-mounted fingerprint reader is a new thing for Realme, and it appears that they’ve nailed it the first time. The power button has the fingerprint reader embedded, and it’s comfortably positioned on the right. However, left-handed users would have to either unlock the phone with their right hand, rely on the face unlock or do some finger gymnastics with their middle or index finger on the left hand. 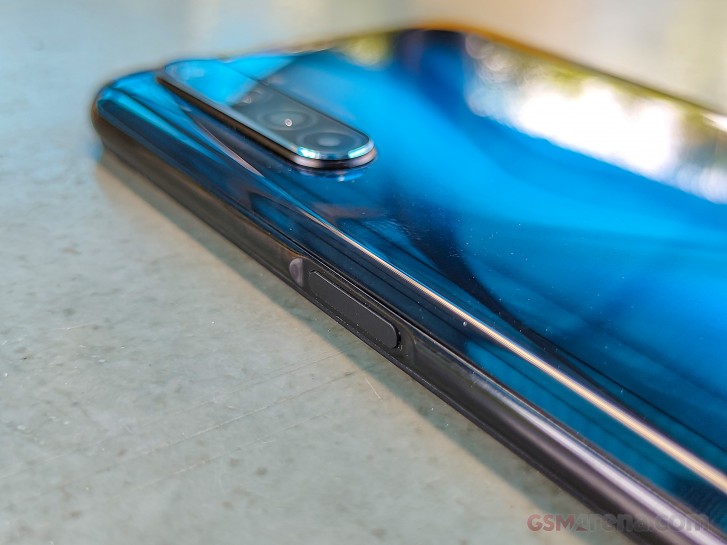 We need more time with the device to form a more objective opinion, but at a glance, the Realme 6 Pro looks and feels like a well-built device with minor issues like wobbling when placed on a flat surface due to the camera bump. Although, once you put on a case, it goes away.

Even though the Realme 6 Pro uses a different panel than the Realme 6, it feels a lot like the same one in terms of brightness, contrast, and color calibration. The diagonal is 6.6″ this time around and still offers a 90Hz refresh rate. We haven’t tested the brightness of the panel, but it looks sufficiently bright on a sunny day. Realme promises at least 400 nits of maximum brightness, and we suspect it can go beyond that in Max Auto mode. 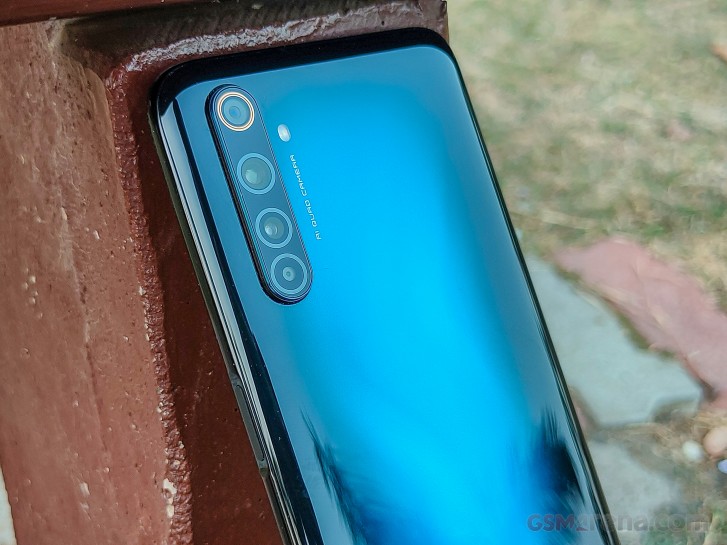 Here are a couple of benchmarks to see how it stacks against the competition and some of its siblings. Unfortunately, it appears it would be hard for this GPU to drive any heavy gaming titles higher than 60 fps to really take advantage of the high-refresh rate display.

The camera hardware is mostly the same as well with the notable inclusion of a proper telephoto camera. The main sensor is still 64MP paired with an f/1.8 aperture. The 12MP telephoto with f/2.5 replaces the depth sensor on the Realme 6 while the same 8MP ultra-wide camera with f/2.3 aperture and 2MP macro snapper are on board. 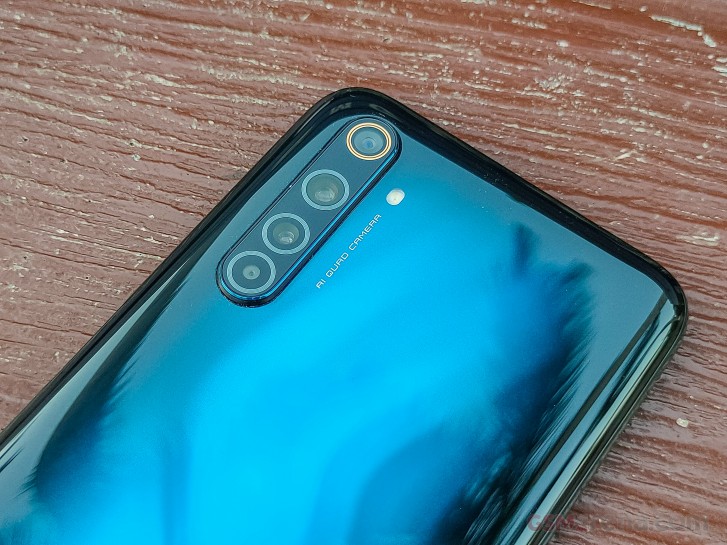 The UIS and UIS Max gimbal-grade video stabilization modes are also at hand using the main and the ultra-wide cameras, respectively. The Realme 6 Pro also adds a live bokeh video effect. We’ve seen this implementation with the current Samsung Galaxy flagships, so it’s going to be interesting to see how it works on lesser hardware. 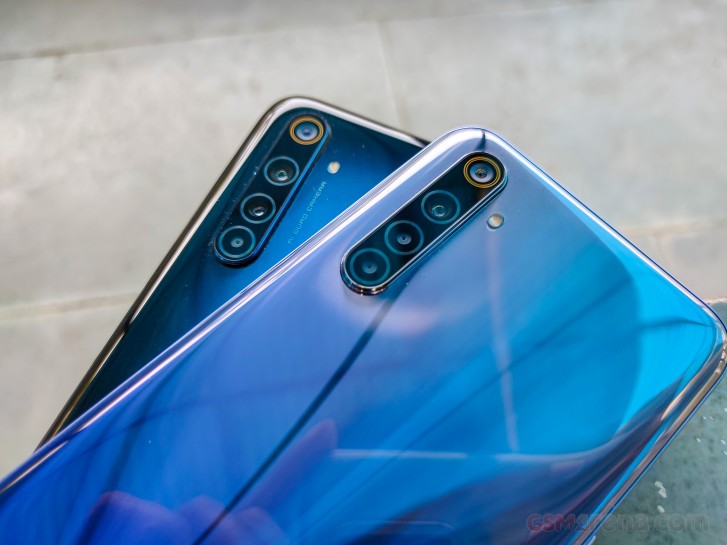 Realme also highlights the new Nightscape 3.0 mode, and it’s now smart enough to detect if the phone has been placed on a tripod in which case it would use a 50-seconds long exposure to capture more light. There’s also an additional Ultra Nightscape mode for stills in extremely dark environments.

And as for the selfie cameras, the main one is 16MP with f/2.1 aperture and an 8MP ultra-wide one with f/2.2 aperture. 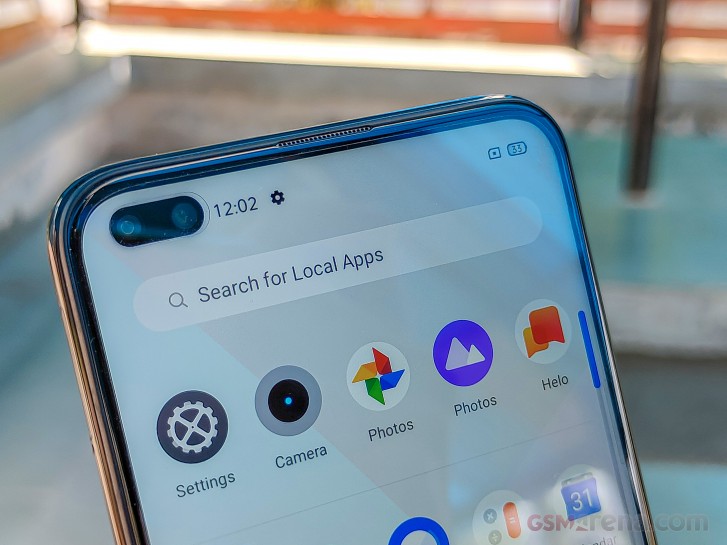 A 4,300 mAh battery is keeping the lights on – the same one as on the smaller Realme 6. We would assume that it would have shorter battery life than the vanilla 6 given the bigger screen, but there are more factors at play here like the chipset. Still, the same 30W VOOC Flash Charge 4.0 is capable of charging up the battery from 0 to 100% in less than an hour.

And perhaps this is the place to say a few words about the fingerprint. It works great – it’s fast and reliable and offers a pretty useful setting, which we haven’t seen on other smartphones with the same fingerprint reader design. There’s an option in the menu that lets you unlock the phone with a light touch or with a more firm one. The latter, however, seems to be working only if you press the power button all the way. It’s a cool feature to have if you find yourself unlocking the device by mistake all the time. 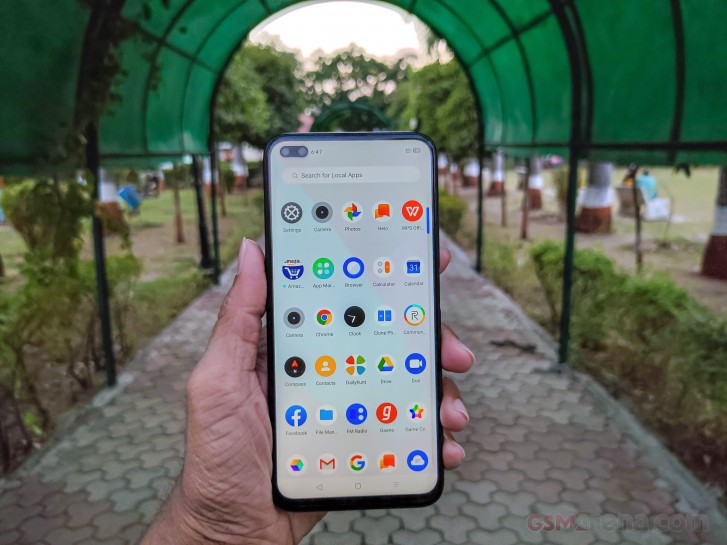 We have Realme’s brand new UI running the show out of the box. The new UI is based on Android 10, and it looks a lot more stock-ish than before. That’s fairly good news for vanilla Android fans. The drop-down menu, the recent apps menu, and the app drawer look a lot like something you’d see on a Motorola, OnePlus, or Pixel smartphone. Gone is the heavy UI customization. That doesn’t mean it lacks the essential features that ColorOS has.

Screenshots from the new Realme UI

While the Realme 6 Pro looks like a great value smartphone, it doesn’t go uncontested. We are yet to see the Redmi Note 9 Pro, and it could also lose some potential buyers to the Realme X2, which offers an OLED panel, slightly more powerful chipset, under-display fingerprint reader at the same price of INR 16,999. Then again, the Realme 6 Pro offers an actual telephoto camera, slightly bigger battery with the same charging tech, and although IPS, the panel runs at 90Hz. Also, its selfie game is more versatile. 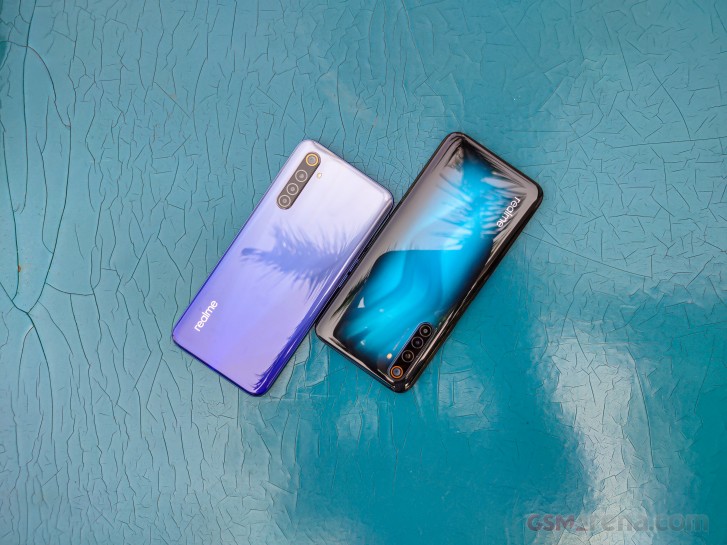 Despite our wavering, it’s hard not to remark the excellent value this phone provides. For less than INR 20,000, you are getting more than adequate chipset, a big screen with 90Hz refresh rate, flagship-grade fast charging, semi-premium build, big battery, and a camera setup that covers all focal lengths. Stay tuned for our full review.

Hip to be unsquare? Instagram galleries can now accommodate other shapes

Lowe’s Is Officially Dumping Its Iris Smarthome Platform for Good

Geek Trivia: Stars That Cannibalize Other Stars Are Known As?

KPMG survey: 67% of corporates are not using blockchain technology

How Osso VR Is Revolutionizing The Way Surgeons Train For Operations

vivo X21s is official, it's actually the vivo V11

No Man’s Sky: Beyond Finally Brings the Title to PlayStation VR and Steam VR