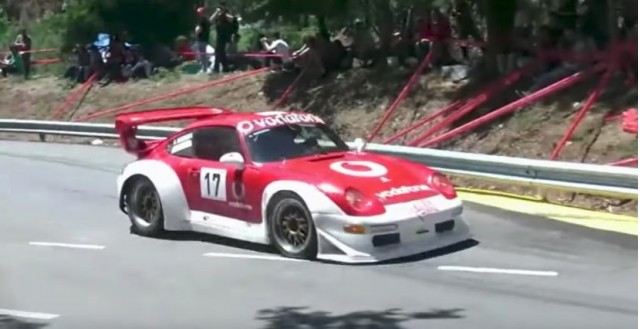 For the 993-series 911, Porsche produced less than 60 examples of the mighty GT2, and even fewer GT2 Evo models.

This first-generation GT2 was built in an effort to satisfy homologation requirements, and it was a monstrous example of what Porsche could get away with in a road car.

Power was rated at 424 horsepower which for the early ’90s was a ridiculous figure. By the end of the run, that figure had climbed to 444 hp. The car you see above? It’s reportedly making 700 horses, the same as the latest 911 GT2 RS.

This is the hill-climb machine of António Nogueira, and clearly it’s been heavily modified. There’s extra cooling for the brakes, the body kit is a bit more wild than the already aggressive stock skin, and the engine has been massaged a tad. Well, more than a tad as this is a lightweight 993 Porsche that’s pushing out Hellcat power numbers.

That’s why it’s able to line up at the starting spot of a hill climb and then rocket forth into the distant twists and turns of the course ahead. It’s loud. It’s angry. It’s…glorious, and that makes it a true hill-climb monster. Still, it’s surprising to see such a rare vehicle being pushed this hard. That’s what its designers and builders had in mind, however, when they set out to create the twin-turbocharged terror that is the ultimate 911.

Geek Trivia: Which Author Was Forced To Bring One Of His Beloved Characters Back To…

How VRChat Plans To Become More Than Just A Meme

GrandChase is Back as an Exclusive Strategy MMORPG for Mobile

Factmata gets backed by eyeo, maker of Adblock Plus, and takes over its Trusted News…

What Happened to Winamp, and Can You Use It Now?

Shitposters are using sophisticated Bitcoin satellites to troll each other