Oxford-Yale study: Within 50 years, robots could outperform humans at everything 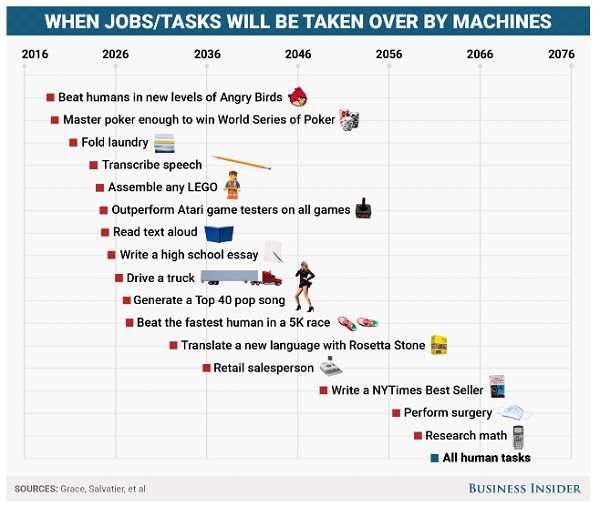 Don’t expect to see a human behind the wheel of an 18-wheeler by 2027. Or a set of human hands performing a delicate surgery by 2053.

According to a new study from Oxford and Yale University researchers, those are the years artificial intelligence is slated to take over each of those tasks. And so it will go for millions of other jobs over the next 50 years, researchers find.

The study relied on survey responses of 352 AI researchers who gave their opinions on when in the future machines would replace humans for various tasks.

Lead investigator Katja Grace and her colleagues found the tasks most likely to get automated within the next 10 years were rote, mechanical tasks. Language translation could outpace human performance by 2024, responses indicated, and robots may be able to write better high-school-level essays than humans in 2026.

More complex and creative tasks, like writing books and performing high-level math, will take longer. Ultimately, the researchers found AI could automate all human tasks by the year 2051 and all human jobs by 2136.

“Advances in artificial intelligence … will transform modern life by reshaping transportation, health, science, finance, and the military,” the researchers wrote. “These results will inform discussion amongst researchers and policymakers about anticipating and managing trends in AI.”

The prospect of advances in AI raises important questions. Will progress in AI become explosively fast once AI research and development itself can be automated? How will high-level machine intelligence (HLMI) affect economic growth? What are the chances this will lead to extreme outcomes (either positive or negative)? What should be done to help ensure AI progress is beneficial? Here are some key findings:

2. Explosive progress in AI after HLMI is seen as possible but improbable. Some
authors have argued that once HLMI is achieved, AI systems will quickly become vastly
superior to humans in all tasks [3, 12]. This acceleration has been called the “intelligence
explosion.” We asked respondents for the probability that AI would perform vastly better
than humans in all tasks two years after HLMI is achieved. The median probability was
10% (interquartile range: 1-25%). We also asked respondents for the probability of explosive global technological improvement two years after HLMI. Here the median probability was 20% (interquartile range 5-50%).

3. HLMI is seen as likely to have positive outcomes but catastrophic risks are
possible. Respondents were asked whether HLMI would have a positive or negative impact
on humanity over the long run. They assigned probabilities to outcomes on a five-point
scale. The median probability was 25% for a “good” outcome and 20% for an “extremely
good” outcome. By contrast, the probability was 10% for a bad outcome and 5% for an
outcome described as “Extremely Bad (e.g., human extinction).”

Google Photos is adding ‘Favorite’ and ‘Like’ buttons to your pictures

How to take a screenshot on Apple iPhone X

Comment: The beloved iPhone SE now lives on in name only; meet the iPhone 8S

Tap Your Way Through All Nine Realms in Thor: War of Tapnarok

Renault-Nissan alliance board could be divided over Ghosn's fate

Product Innovation in a Digital Economy: What’s Next for…