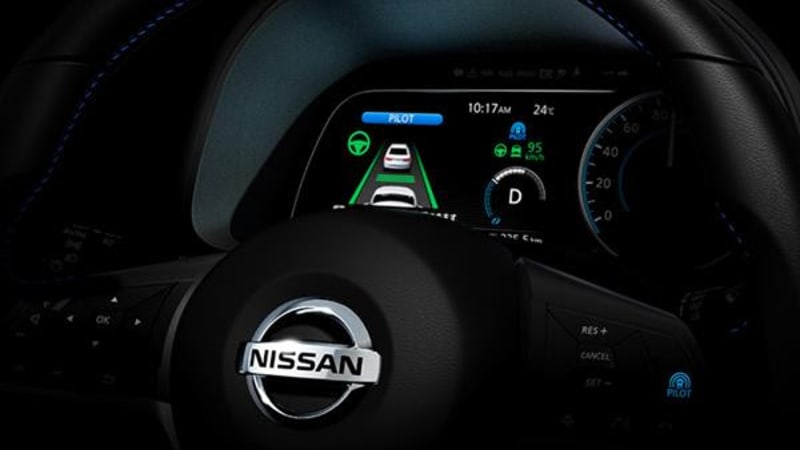 We’ve known since the Consumer Electronics Show back in January that the 2018 Leaf will get semi-autonomous technology. Now Nissan has provided a look – a glimpse, anyway – at the Leaf ProPilot Assist system.

In the image released by Nissan, above, we see the driver’s display – and a button on the steering wheel labeled “Pilot.” Push that and voila, or presumably voila, the displays at left are activated. There’s a blue “Pilot” light at top that must indicate the system is in engaged, and likewise the “Pilot” logo from the button is repeated at the top center of the display. The green steering wheel signifies the car is ready to handle the steering. (That symbol is repeated in the center of the display, too. If you ever want to see repetitive displays, run a Leaf down to a nearly depleted battery and count how many warning lights appear.)

The green perspective lines let you know that the car detects lane markings, and the green light between the two car symbols must show that the system detects the car ahead and will control speed and distance.

Beyond the Pro-Pilot system, we can see from the dashboard that the power use-vs.-regeneration gauge, which was formerly an arc of bubbles across the old Leaf display, now encircles the drive selector readout. The important remaining-mileage “guessometer” and even more important readout of battery percentage are not in view here but must be in the center of the speedo at right, or to the right of that.

Nissan promises that ProPilot Assist “reduces the hassle of stop-and-go highway driving” and “supports drivers by helping control acceleration, braking and steering during single-lane driving on the highway.” In other words, it won’t handle lane changes like a few other cars will – expect to do that yourself. But Nissan also promises increasing levels of autonomy in the years to come, “with the system eventually able to navigate city intersections.”

Sony: Resident Evil 7’s PSVR Success ‘Was A Big Surprise To Us’

Huawei Mate 30 Pro gets torn down on video

Deep learning on a USB stick for $79

OnePlus 6T will be unveiled a day early thanks to Apple

Mom and dad are to blame for the robot parent uprising