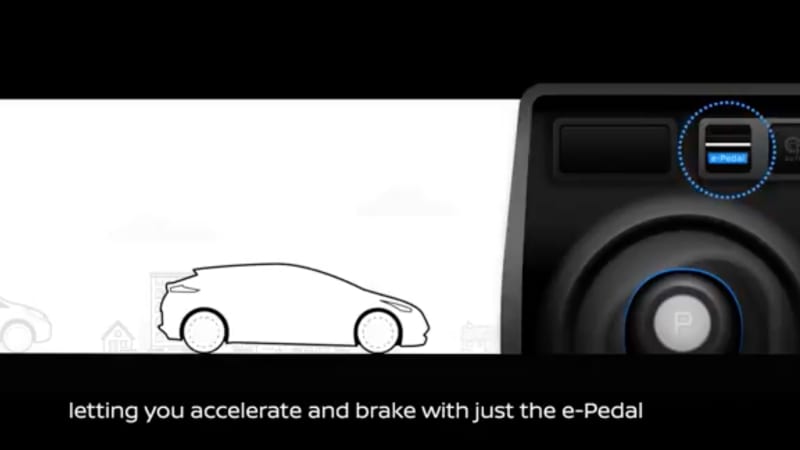 Regenerative braking is great. When it’s strong enough to let you drive with just one pedal, it’s even better. You’ll be able to enjoy one-pedal driving in the next-generation Nissan Leaf EV, and the automaker is teasing the new feature in the video above.

According to Nissan, its e-Pedal is better than one-pedal driving in other vehicles in that it can bring the car to a complete stop and hold it, even on a hill. Nissan says drivers can use e-Pedal in 90 percent of their driving, even in heavy city traffic, without having to ever touch the brake. Just press the pedal to go, ease off to slow down, and lift off completely to bring the Leaf to a stop.

The other nice thing is that it allows you to turn it on and off. Like we said, one-pedal driving is great most of the time, but sometimes you want to be able to coast with your foot off the accelerator (and, surely, there will be drivers who simply want to drive the old-fashioned way, with two pedals, as they always have). Thankfully, e-Pedal can be turned engaged and disengaged with the flip of a switch.

One-pedal driving isn’t new at all. The BMW i3’s strong regeneration allow drivers to mostly drive with one foot, as long as they can anticipate far enough down the road. The same goes for a number of electrified vehicles with a braking mode. The Hyundai Ioniq Electric and Volkswagen e-Golf allow you to choose from multiple levels of regeneration, though from our experience, we mostly just want the regen feel to either be all or nothing. Nissan appears to be keeping it simple, allowing a choice between regen strong enough to stop the car and more traditional driving with a single toggle.

The e-Pedal video is the latest piece of Nissan’s campaign to slowly reveal the 2018 Leaf ahead of its official premiere on September 5. The Japanese automaker has already teased the new Leaf’s headlight, front fascia, ProPilot Assist semi-autonomous highway driving technology, and ProPilot Park autonomous parking.

Check Out The Trailer For Blade Runner 2049’s VR Experience

Difference Between Shared Web Hosting and the VPS Server hosting

60 days in lockdown: 4 productivity tips to keep you at the top of your game

Evora GT430 is most powerful Lotus road car yet

Verizon is teaming with Boingo to bring 5G inside