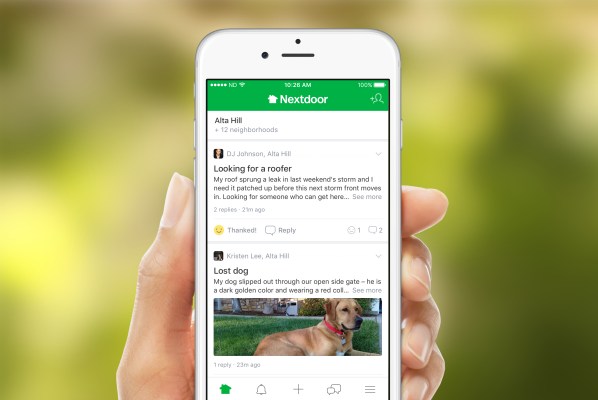 As a result of the new investment, Meeker will join Nextdoor’s board.

Meeker had left Kleiner Perkins last year, where she was well-known for her popular Internet Trends Report, released annually. She has since founded Bond, taking Kleiner’s entire former growth team with her, where they’re all now equal partners. Bond raised $ 1.25 billion for its debut growth fund.

As of the May 2019 round, Nextdoor was valued at $ 2.1 billion for its neighborhood-level networking platform, which today generates revenue from sponsored posts and its real estate vertical for local agents. The company had said it was on track to double its revenue in 2019.

We understand the valuation remains at $ 2.1 billion, even with the additional funding.

Since its 2010 founding, the Nextdoor platform has grown to more than 247,000 neighborhoods across 10 countries. Its international growth potential appears to be of interest to Meeker, as does the verification process Nextdoor uses to ensure its users actually live in the neighborhoods they join.

This is not how Facebook’s Groups product works, where verification is left up to individual Group admins. That results in neighborhood groups filled with people who are just looking to research the area, those who used to live there but have since moved, businesses looking to advertise to locals, people who live nearby but don’t have a neighborhood group of their own and various other non-neighbors.

“Nextdoor has proven itself as the leader in local connectivity. Nextdoor is built on trust — verifying each members’ name, address and neighborhood — which creates the transparency and accountability that is core to building communities,” Meeker said. “Nextdoor is connecting people to the information and services that matter most, and I am excited to work with this impressive team to help expand Nextdoor’s local utility as well as it’s growing global footprint,” she added.

In recent months, Nextdoor has also grown its team, with new hires Antonio Silveira as its head of engineering; Tatyana Mamut, head of product; Bryan Power, head of people; and Craig Lisowski, head of data, information systems and trust.

“We could not be more thrilled to welcome Bond to our family of investors. Mary Meeker has been a strong supporter of Nextdoor for many years and is deeply knowledgeable about consumer technology,” stated Sarah Friar, CEO of Nextdoor, in a statement. “At Nextdoor, we believe that change starts with each of us opening our front doors and building deeper connections with the people nearest to us: our neighbors. We’re thrilled and honored to partner with all of our forward-looking investors to catalyze neighbors’ ability to connect with relevant local conversations, organizations, and businesses, engage in real-world interactions, and unlock the global power of local.”

iOS 13 will be available on September 19

PUBG's Xbox One Exclusivity Period May Get Extended

NES Emulator Enables You To Dive Into Your Games With VR

No, this isn't the LG G7 in Lime Green

Surprise! There's A New Nintendo Direct Coming, And It's Due Tomorrow

BMW will show a roadster at Pebble Beach

Facebook will pay users $5 for their voice memo to improve…

Watch your toes. Snapchat’s new lens turns the ground into…