Next Porsche 911 Turbo S spotted at Nurburgring with wide body 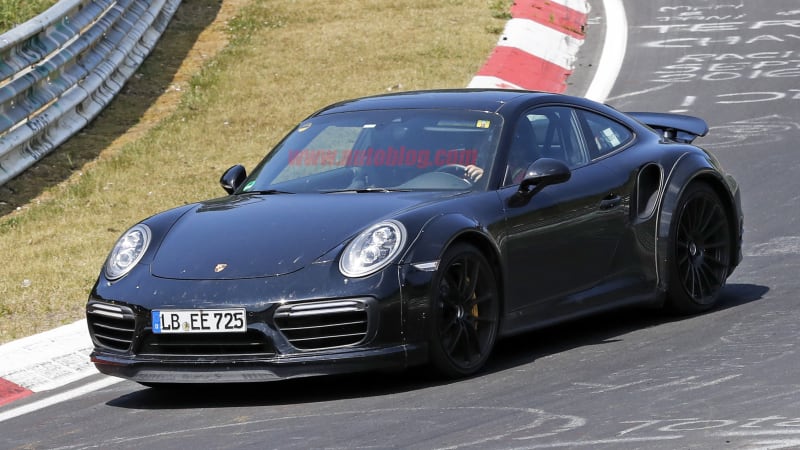 We’ve already seen the new generations of the plain 911 Carrera, as well as the base 911 Turbo, testing at the Nürburgring, so it was only a matter of time before we saw a version of the next-generation 911 Turbo S at the Green Hell. We know this is a Turbo S because it says so on the front lip spoiler. It also has the fixed rear wing of the current Turbo S.

Those aerodynamic aids are leftovers from the current model, though. In fact, much of what we see here is current-generation Turbo S equipment, including the lights, bumpers, and the rear wing. Where this car differs is in the fenders. Porsche bolted up some very aggressive fender flares to widen the body and fit fat tires to this test car. This should help give the new Turbo S more grip and make it quicker on the track. The air intakes are much more aggressive on this car than the current Turbos, as well as the prototype Turbo we saw earlier.

Outside of the wide body, there isn’t much else to spot on this 911. We currently expect to see the new base model 911 sometime next spring at the earliest. Using that timeline, the 911 Turbo and Turbo S will probably be revealed later in the year, perhaps winter of 2018. We also anticipate the new generation of 911 Turbo cars will produce more than 600 horsepower. And whatever power the regular 911 Turbo makes, the Turbo S will make more.

Samsung Galaxy A10 goes on sale in Pakistan

Skyrim: Make the Most Out of These Alchemy Items

Can a bad video gamer beat a professional driver?

A Trial Awaits as The Tower Comes to HTC Vive

Apple Card, ‘iPhone 11’ leaks, & Facebook listening to you on the…