Next-generation Jeep Wrangler arriving at the end of 2017, diesel for 2019 model year 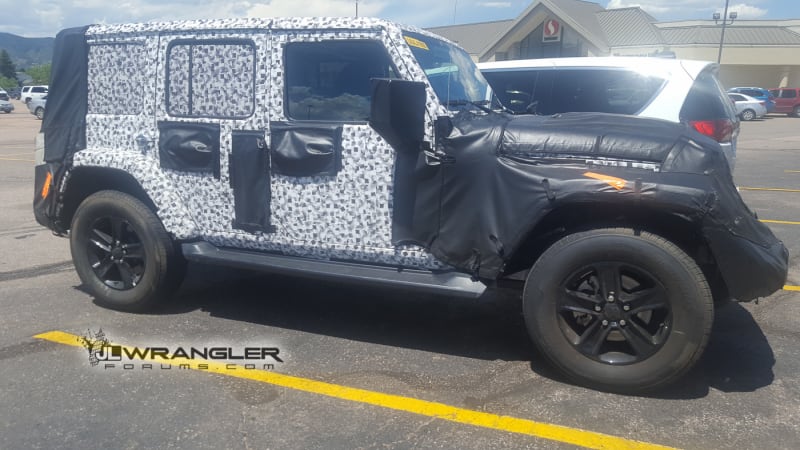 The folks at JL Wrangler Forums have come across some very juicy information regarding the next-generation Wrangler, thanks to an anonymous source who got the details from a dealer meeting. Among the information provided by the source is the timeline for the new Jeep’s release. It will be fully revealed at this year’s Los Angeles Auto Show, and it will hit dealers this December.

At launch, the next-gen Wrangler will be available with both a 3.6-liter V6 with either a manual or automatic, and a 2.0-liter four-cylinder that can only be had with an automatic. We expect this engine to be turbocharged and pack as much as 300 horsepower. It also seems Chrysler is still making good on its promise of a diesel Wrangler for this generation. Photos taken by a JL Wrangler Forums user show what looks like a diesel exhaust fluid tank underneath one of the prototypes seen above. There could be a bit of a wait on that powertrain, though. According to the JL Wrangler Forums source, it won’t be arriving until near the end of the 2019 model year, so potentially at the end of the 2018 calendar year, and possibly early 2019.

The other big news is that the anonymous source confirmed that there will in fact be a hardtop with a power sliding opening. The feature was rumored years ago, and we may have had our first look at it thanks to earlier spy shots also taken by a JL Wrangler Forums member. The photos showed a mysterious set of switches on the windshield header that may have been controls for the power top. This feature won’t be available at launch according to the anonymous source, and will instead debut near the end of the 2018 model year, so likely early- to mid-calendar year 2018. Some other minor changes to colors and equipment were revealed also, and can be seen at the forum website, here.

Facebook to acquire Giphy in a deal reportedly worth $400 million

Report: Huawei says that it follows U.S. sanctions and won't be crippled with an…

5 Of The Most Far-out Elon Musk Quotes | Autoblog