Samsung’s latest ad attacking the iPhone compares the download speeds of iPhone X to that of the Galaxy S9 while at the same time poking fun at Apple Store employees. 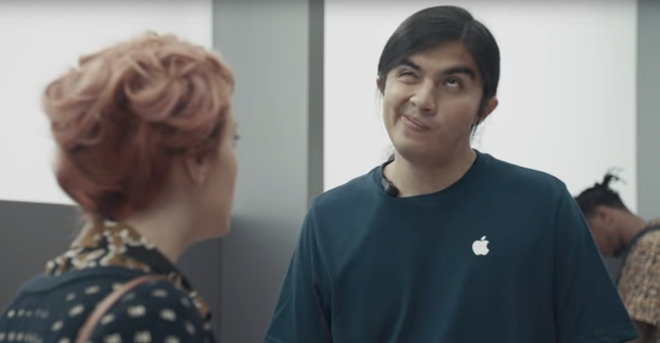 The ad, titled “Ingenious: Speed,” is set within a bright retail environment clearly meant to reflect an Apple store. It starts off with a woman waiting to be helped by an employee. Quickly, the worker, complete with an Apple logo t-shirt, approaches to make a sale.

When asked about iPhone X’s download speeds, the employee boasts they are faster than those of iPhone 8. She responds with apprehension, looking for confirmation that iPhone X is not as fast at downloading data as the Galaxy S9. Her query renders the employee speechless, with his only response being an unending, “Ummmm…”

Samsung touts data obtained from Ookla’s Speedtest Intelligence Data obtained February through April of 2018 as the basis for the claim. Weighted average download speeds of all major LTE carriers were compared.

Regardless, the ad clearly doesn’t step into other, arguably more crucial, areas of phone performance where our tests had iPhone X in a clear lead. Looking at the Geekbench results, iPhone X completely destroys the S9+, especially in single core performance. The iPhone came in with single- and multi-core scores of 4,243 and 10,433, respectively, while the S9+ managed scores of 2,007 and 8,307.

Graphics-wise, iPhone X still outpaced the S9+. The S9+ scored 14,308, very close to, but not topping, iPhone’s 15,177. In all our testing, there were a couple tests where the S9+ won out, but by-and-large the iPhone X was the more powerful device.

Next year, Samsung is expected to release the Galaxy S10 and S10+, which will most likely attempt to more evenly compete with Face ID. Currently, the S9 and S9+ use a 2D scanner when validating a face and is much less accurate than Apple’s 3D infrared TrueDepth camera system.</span>

Future Software: Only as Good as the People Who Build It

Deals: 50% off on both Samsung Galaxy S8 and Google Pixel 2 XL

A Reminder, Apple's iOS 11 Isn't for Everyone

Tesla could go to Apple for take-private deal, says investor – does it make sense?

The Promising Life Is Strange Loses Itself In Time