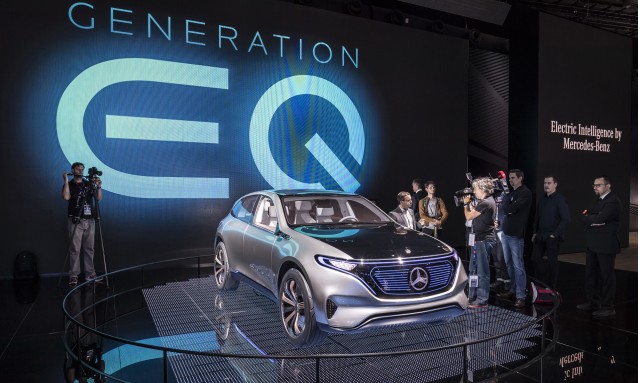 Mercedes-Benz in the coming years will introduce a family of new electric cars under the EQ sub-brand.

There was a chance Mercedes might have been blocked from using the name in China because local automaker Chery has been selling an electric car called the eQ since 2014. However, the two automakers on Friday released a statement that they have reached an agreement on the usage of the name for their respective electric cars.

Chery will focus on using the designations eQ and eQ1, as well as further numerical continuations thereof, in China and the rest of the world. Meanwhile, Mercedes will use EQ with alphabetical supplements. Mercedes provided the example of EQC as the name of one of its upcoming electric cars.

Mercedes used the 2016 Paris auto show to launch its EQ sub-brand with the unveiling of the Generation EQ concept car. The striking SUV concept is thought to preview the first of Mercedes’ EQ electric cars, an SUV similar in size to the GLC and labeled the EQC. Test mules for the vehicle have already been spotted. The market launch is expected in 2018.

T-Mobile to launch its 5G network on December 6th

The best new features in iOS 11

Mercedes-AMG Project One looks insane on the road

New Characters Are on the Way to Animal Crossing: Pocket Camp

Prep to get certified in Cisco Systems networks for only $31

Life In 360°: “When You’re Facing The End, Your Pilgrimage Begins”

Rumour: SEGA And Retro-Bit Might Actually Be Working On A Secret Retro Console

How to Listen to FM Radio on iPhone

Free September Games With Gold Titles For Xbox One, 360 Announced