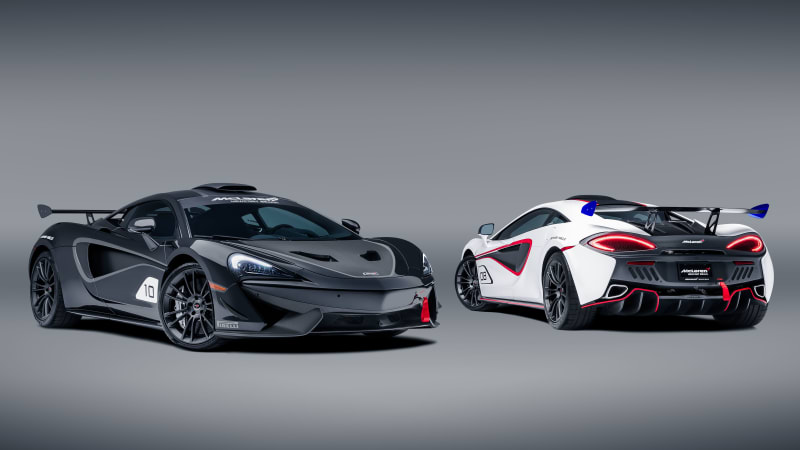 We like the McLaren 570S a lot. Few vehicles combine sharp looks, raw speed and genuine usability like McLaren’s entry-level model. Still, there’s always room for some custom changes. That’s where McLaren Special Operations steps in. MSO builds bespoke vehicles like the MSO R and MSO HS (both based on the McLaren 675LT) for customers willing to shell out the dough. Usually it’s a one or two-car run, but McLaren just announced a run of 10 road-legal cars done up like the 570S GT4 race car and painted like McLaren F1 GTR Le Mans cars from the ’90s.

One look at the McLaren MSO X and you’ll know it means business. If the paint scheme, roof snorkel and pylon-mounted rear wing don’t give it away, the stripped-down interior (complete with a fire extinguisher) probably will. This is a race car for the road, and since all the cars were commissioned by McLaren Newport Beach, they’re actually legal in the US. McLaren wants the owners to be able to drive their cars to the track, so each MSO X retains parking sensors, rear-view cameras, air conditioning and a lift for speed bumps and driveways.

MSO did as much as possible to make the cars look like the 570S GT4, adding a few other touches here and there. The rear wing adds 220 lbs of downforce to the rear. The roof snorkel was inspired by the 1997 F1 GTR Longtail and improves air induction. The hood has intakes that help channel air to the snorkel and rear wing. Dive planes on the front add some stability up front. Other changes include MSO Titanium Super Sports Exhaust and Pirelli PZero Corsa tires.

The roof, hood, side skirts, engine cover, front and rear bumpers and rear diffuser are all done in a satin carbon fiber finish. McLaren says the cutouts in the bumper are there to shave weight. The rest of the car is painted in a different race livery.

The interior of the standard 570S features carbon fiber on the steering wheel, instrument cluster and center console. The MSO X removes the carpeting and leather, exposing the McLaren’s carbon-fiber Monocell 2 on the car’s door sills. Each carbon-fiber seat is fitted with a six-point racing harness. The standard seat belts are still there for non-track driving. There’s space behind the seats for a helmet. The McLaren Track Telemetry from the 720S adds cameras so you can review your laps.

MSO doesn’t ever list costs, but if you’re ordering a bespoke supercar, money usually isn’t an issue. We just want pictures of the other eight cars.

Jay Leno takes a look at a Porsche 356-Boxster mashup

How to Find Your Top Playing Songs in Apple Music