New images and a video of a screen protector for the upcoming “iPhone 8” have been posted to the Chinese social network site Weibo and shared recently by leaker Benjamin Geskin and leak aggregation site SlashLeaks. The tempered glass screen protector is said to be made for Apple’s upcoming iPhone 8 with a 5.8-inch display, and represents a design that falls in line with current rumors for the unreleased iPhone.

The screen protector’s bezels are noticeably thin and are the same thickness all the way around, with the exception of the front-facing cutout for the device’s camera and various sensors. Although reports have failed to largely agree upon how Apple will incorporate the iPhone 8’s front camera into a device with dramatically thinner bezels, recent renders have suggested a minor cutout for the camera, ambient light sensor, proximity sensor, and potentially a 3D sensing module. 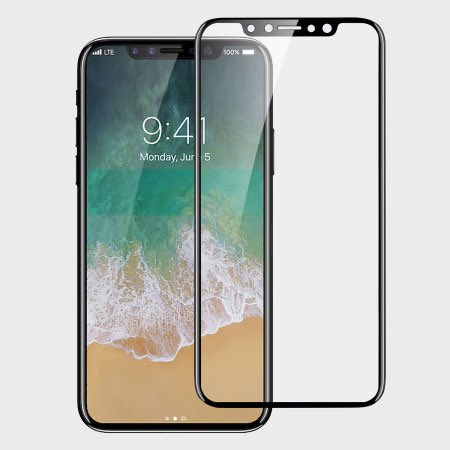 To make the cutout less noticeable, iOS could then use deep black technology provided by the new OLED screen to make the area atop the screen appear like one uninterrupted dark strip. As Geskin tweeted out over the weekend, the new tempered glass screen protector aligns nicely with his previous iPhone 8 renderings.

Called the “Olixar iPhone 8 Full Cover Tempered Glass Screen Protector” and priced at $ 31.99, the MobileFun description for the accessory says that it supports 3D Touch and provides edge-to-edge protection for the iPhone 8’s screen. The screen protector is also said to include a 2.5D rounded edge, supporting the rumor that the iPhone 8 will include a flat OLED display.

In a separate image posted on SlashLeaks today, another screen protector manufacturer has leaked a picture of an iPhone 8 accessory, claiming the 5.8-inch iPhone will be dubbed the “Decade Edition.” This name has never been mentioned in previous reports on potential name schemes for the iPhone 8, so it’s best to remain skeptical about its veracity.

Following a report last year that Apple employees were referring to the 2017 iPhone as the “iPhone 8,” that nomenclature has largely become the go-to title for the 5.8-inch device. More recently, Japanese site Mac Otakara has suggested that the device could be called the “iPhone Edition,” marking the new iPhone as a higher-end device similar to the Apple Watch Edition. The “Edition” name would furthermore differentiate it from the iterative iPhone 7s and iPhone 7s Plus updates also expected to launch this fall.

How to Show or Hide the Home Button in Google Chrome

Geek Trivia: Comfort Noise Is A Tool Used Widely In Which Industry?

Focal Kanta No. 3 Review: These $13,000 speakers are stunning pieces of audio…

How Intel Lost the Mobile Market, Part 2: The Rise and Neglect of Atom

Watch This Incredibly Patriotic Launch Trailer For The American Dream

Amazon, Microsoft Sound Off on Google’s Decision Not to Compete for Pentagon’s JEDI…

HMD now owns 500 Nokia design patents, including one for the Lumia Camera UI