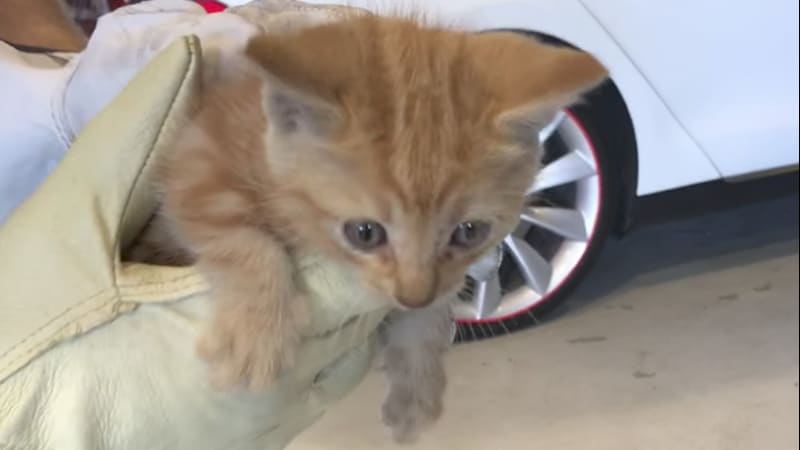 Cats, lovable idiots that they are, sometimes put themselves in situations from which they have trouble removing themselves. Take, for instance, the kitten that found itself stuck inside the bumper of a Tesla Model X. YouTube user S U posted the above video, in which we can hear tiny mews coming from inside the car. The person behind the camera claims not to have a cat, and presumably didn’t order the meowing bumper option from the factory, so the sound gave him paws pause. He took the Model X to a Tesla Service Center to get the noise looked at.

The second video shows the extrication of the orange feline, which didn’t seem too eager to leave its new den. The collective “Aw!” when the kitten emerges can still be heard echoing throughout the Internet. The poster of the video says that the cat, which he calls Tessie, was likely trapped in the car for over 14 hours, and was immediately given water upon exit. He also says that one of the rescuers at the service center adopted the stray kitten.

Finally, in a follow up video, the Model X owner postulates that Tessie got into the vehicle through an opening in the rear wheel well. He also says that feral cats aren’t a rarity where he parks, and even captures another cat lounging nearby. As for Tessie, “Her weekend obviously had a rough start, but she probably had the best end of the weekend ever.”

We wouldn’t be surprised if in the near future Tesla creates an Easter egg to make your car meow on command in honor of Tessie.

Google Photos is adding ‘Favorite’ and ‘Like’ buttons to your pictures

Spooky data visualization reveals most haunted cities in the US

Never Quite Alone with The Inner Friend

High school lets kids dress up for student ID pics, and the results are stunning

How to Apply AI to Brand Marketing