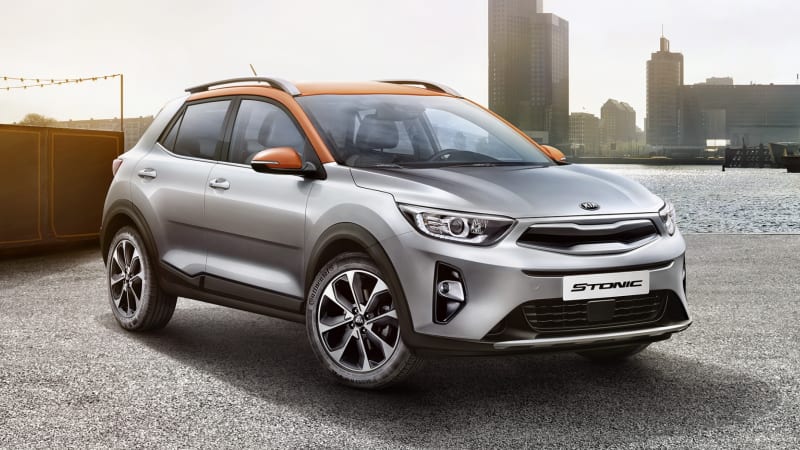 About a week after the global debut of the all-new Hyundai Kona compact crossover, sister company Kia rolls out its own B-segment fighter, the stylish Stonic. The two new models are going up against crossovers like the Honda HR-V, Toyota C-HR, Mazda CX-3, Nissan Juke, and Fiat 500X. This is a segment that’s big on both style and practicality, and at first glance the Stonic fits both bills. We’ll have to wait until this fall to get our hands on it.

The Stonic is a handsome car, but its design isn’t as bold as something like the Kona or the C-HR. The fascia looks like an updated version of the Kia Soul rather than a shrunken Sportage. The big rectangular eyes flank the corporate tiger nose grille, with a large lower air dam that hides the hardware for the active safety equipment.

The profile once again eschews any ties to the Sportage, with hard character lines and a new C-pillar design. There is plastic cladding around the wheel wells and along the rocker panel. Like the Kona, the Stonic is available with a two-tone roof, but rather than being locked into a single color, the Stonic will offer five. That means there’s a total of 20 paint combinations.

Unlike the rest of the car, the rear of the Stonic pulls from other Kia SUVs. The taillights feature U-shaped LEDs, though there isn’t a bod-width reflector like on the Sportage. There’s a decent-sized rear spoiler and a faux skid plate on the bottom of the bumper. The hatch doesn’t have a flat bottom, so we’re curious if this will narrow the opening to the cargo area.

The interior carries over the corporate design, with large, easy-to-reach buttons and knobs and large, clear gauges. There are body-colored accents on the dash, the console, and even the stitching on the seats. It’s a simple way to brighten a dark cabin. The Stonic will get Apple CarPlay and Android Auto and will be available with heated front seats and keyless entry and ignition.

All we have right now are details for the European model, so it’s unclear what engines will make it to the US. Look for both the 147-horsepower 2.0-liter four-cylinder and the 175-horsepower turbocharged 1.6-liter four-cylinder to make an appearance. Both engines can be found in the Kona, paired to a six-speed automatic and a seven-speed dual-clutch transmission, respectively.

Pricing and US availability have yet to be announced, so stay tuned for more after the global debut this fall at the Frankfurt Motor Show.

Get better at SEO by taking this online course

Walmart has deals on the Apple Watch, Samsung Galaxy Watch and Fitbit Versa

The Best Sous Vide Accessories For Even Easier Meal Prep

Blockchain can fix the sorry state of the real estate industry

Brace yourself for Apple’s next ugly earnings call