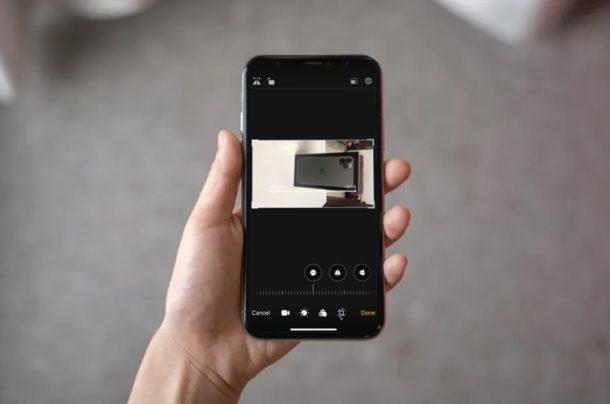 Need to rotate a video or movie on iPhone or iPad? You can easily do that with the latest iOS and iPadOS releases.

Videos can be recorded and watched in either landscape or portrait mode on the iPhone and iPad. However, it’s pretty easy to accidentally record clips in the wrong orientation using your device’s camera (though there are tricks to check the camera orientation they are a bit subtle). Most of us would be frustrated to find that a priceless moment that we shot using our iPhone or iPad is not in the orientation that we wanted it to. Thanks to the built-in video editing tools on iOS and ipadOS, the frustration is short lived as you can easily rotate videos directly on the device with no additional software.

In addition to being able to trim video, add filters, adjust exposure, contrast and other settings, the video editor that’s baked into the iOS Photos app is also capable of rotating video clips. This allows users to quickly fix their clips within a matter of seconds with just a few taps.

Did you accidentally shoot a video upside down or sideways? Don’t fret, you’ve come to right place, because in this article, we’ll be discussing exactly how you can rotate videos on iPhone and iPad running iOS 13 or later.

How to Rotate Video on iPhone & iPad with iOS 13

With the recent iOS 13 update, Apple has made almost all photo editing tools applicable to videos as well. So, make sure your iPhone or iPad is running iOS 13 or later before going ahead with the procedure.

That’s pretty much all the steps you need to follow in order to easily rotate videos on your iPhone and iPad.

If you find yourself doing this rotation often, you can always try to circumvent the issue by locking the orientation on iPhone or iPad so that it’s in the horizontal or vertical orientation that you’d like to capture videos with, thereby not requiring any rotation after the fact.

From trimming video clips to adjusting alignments and adding filters, the new built-in video editor has a lot to offer, especially if you film a lot using your iPhone or iPad. Apple has sort of eliminated the need to download and install any third party video editing apps for tweaking your clips.

The editing tools aren’t just restricted to the clips you shot on your device. That’s right, you could also use them on videos you’ve saved from the internet or clips that you’ve received from friends via AirDrop. Sure, you can’t use it for professional color grading like you can with iMovie, but for the vast majority of the casual users who just want to quickly tweak their videos and make them look good with minimal effort, the stock editor is hard to beat.

This trick obviously applies to the latest iOS and iPadOS releases, but if you’re running a prior version of system software on your device you can still go about rotating videos with iMovie on iPhone and iPad. iMovie has a lot of great tricks available for video editing, modification, cropping, and much more, making it a powerful tool for all iPhone and iPad devices regardless of how old or new they are. Don’t miss more iMovie tips here if that interests you.

Did you manage to fix the orientation of the videos using the Rotate tool on your iPhone or iPad? What do you think about the new built-in video editor within the Photos app? Do you think it could replace full-fledged video editors available on the App Store? Make sure you let us know your thoughts and opinions in the comments section down below.