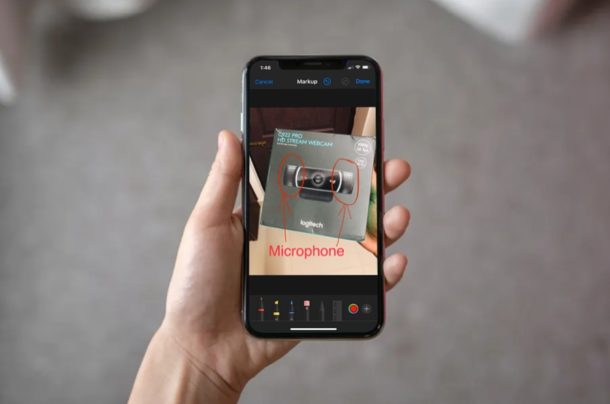 Did you know that you can annotate photos on your iPhone and iPad? Thanks to the built-in Markup feature in iOS, you don’t even need to install a third-party application like Annotable or Skitch from the App Store.

This tool can come in handy when you have to annotate your screenshots, sign documents or add a caption to your photos. It was first introduced in iOS a few years ago, but Apple has kept improving it over time by adding more features and making incremental changes to the interface. From adding texts to sketching with brushes, Markup offers a variety of tools for users to play with.

Are you keen on making use of this tool to sketch your photos and screenshots? Well, you’ve come to the right place. In this article, we’ll be discussing exactly how you can add text to a picture on iPhone and iPad with Markup.

The Markup tool is baked into the stock Photos app on iOS devices. Simply follow the steps below to add captions to any of the pictures in your photo library.

These are pretty much all the required steps to properly annotate your photos using the built-in Markup feature on iOS.

In addition to being able to add captions to photos, Markup tool can also be used to sign PDF documents and even allows you to save multiple signatures for quick access.

Something to understand is that when you add markups to a picture and save it, the image gets overwritten instead of creating a duplicate. However, you can always revert the markup with a single tap in the edit menu, so that’s not necessarily a dealbreaker.

Not quite content with the Markup tool? Don’t fret, because the App Store offers plenty of third-party annotation apps for both the iPhone and iPad, like Annotate, Skitch, LiquidText, PDF Viewer to name a few. Some of them even offer more features and flexibility than the built-in Markup tool, so if you have more demanding needs you can use a third-party app instead.

Did you have fun adding captions to your photos using Markup on your iPhone and iPad? What do you think about this nifty markup tool that’s baked into the Photos app? Care to point out some negatives? Let us know your opinions in the comments section down below.

Dell Technologies commits $1b to the future of IoT

Top 5 Reasons to Stay Away from the Dark Web

Snap is reportedly laying off around 100 employees

The Witcher 3 Merch Giveaway (US Only)

Twitter to launch a ‘hide replies’ feature, plus other changes to its reporting…

Out Now for Oculus Rift and HTC Vive, The Talos Principle VR

Want a real break? Put down your iPhone!