Google’s foray into the world of smart speakers began a little over a year ago with the launch of Google Home, powered by the company’s virtual assistant. It can play music, send audio and video to televisions and stereos with the help of a Chromecast, and can respond to all sorts of questions and commands. It costs $ 129 for the standard Home speaker, $ 49 for the Home mini version, and $ 399 for the audio-enhanced Google Home Max. Now that Amazon’s Echo and Apple’s HomePod are out, the smart speaker arms race is heating up, so let’s see what Google’s midrange offering brings to the table. 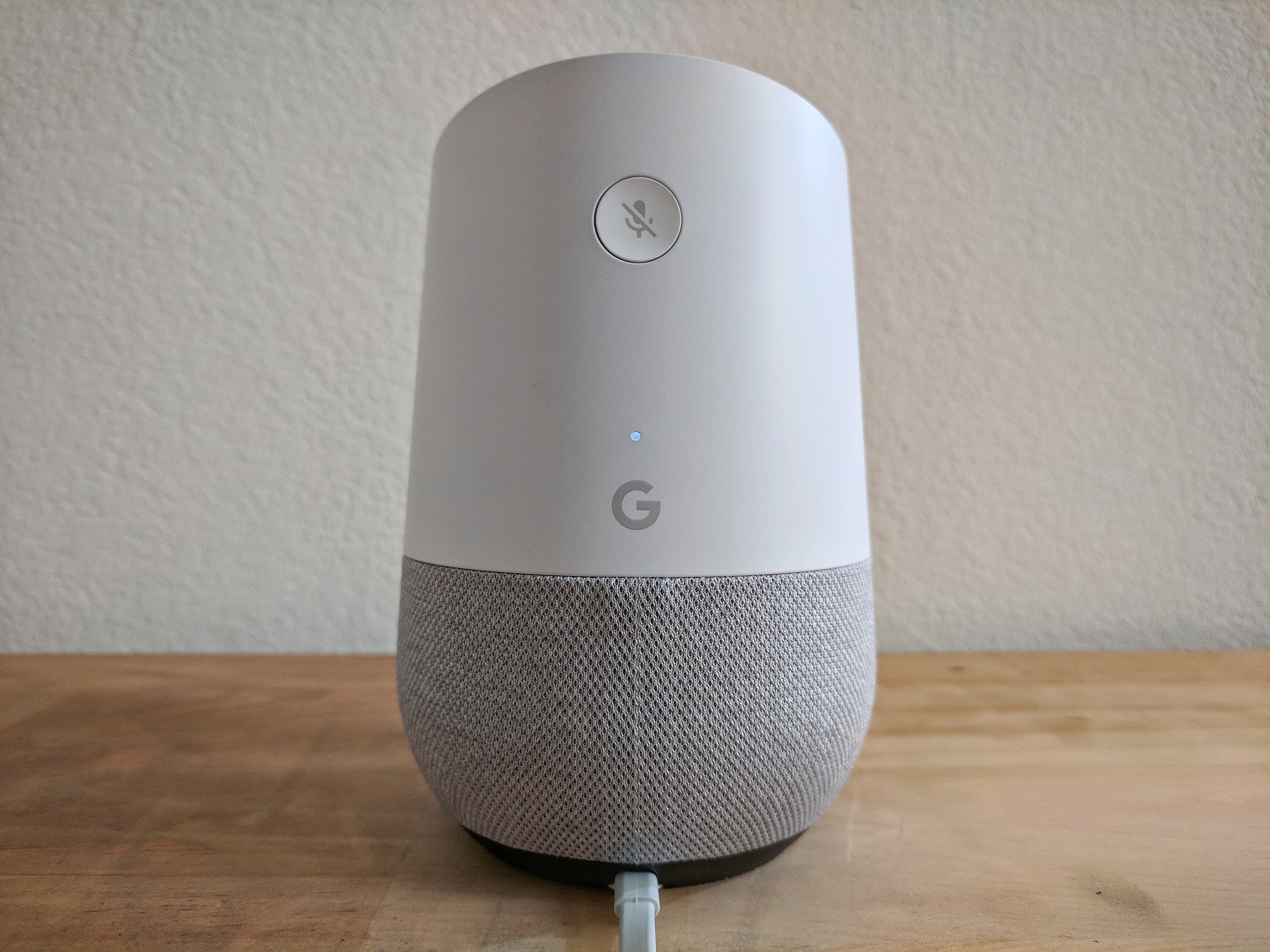 I’m taking a look at the base model Google Home, a minimalist cylindrical speaker 5.62-inches in height with mesh fabric covering the lower half and plastic covering the top half. The device is primarily controlled via voice, but capacitive controls can be accessed by tapping or swiping a finger along the top of the device to adjust the volume, start and stop alarms, and initiate requests. The controls come in handy if you’re standing right next to it and want to quickly make some changes, or if it’s thumping music and would have a hard time hearing you. Google placed LEDs underneath the top cover that can be seen through the plastic when they’re activated, giving a really clean and inconspicuous appearance that looks good in any room.

To push out audio, the Home is equipped with a 2-inch driver and dual 2-inch passive radiators that add a considerable amount of bass for its size. In terms of input options, you’re looking at a purely wireless experience. Audio can be played through services like Google Play Music, Spotify, or Pandora, or you can connect a mobile device to the speaker via Bluetooth. After initial setup, Home doesn’t even require a phone for extended functionality. Asking for a certain song or Netflix show to play will result in the same outcome as if your phone was in the equation, even if looking to play something on a Chromecast-connected television.

Fortunately, Google doesn’t force you to use or prioritize its services over others that you may be using. Sure, you can set the default option to Google Play Music or YouTube Music, but the Home phone app has no problem with you selecting Spotify or Pandora as the default music app. If a primary service isn’t specified, Home unsurprisingly defaults to Google Play Music and YouTube for your audio and video needs. You’re out of luck if you’re using an Amazon Fire stick, but if you’ve got a Roku there is an app that will let the Home talk to it.

In addition to the oft-used music and video services, Google Home’s capabilities extend to other areas of your…well, home. For example, the smart speaker was ready to communicate with my home security system since I was already setup through my Android phone’s virtual assistant.  I have a meager setup so I was only able to set my house alarm and close my garage door, but if I had more smart home stuff connected to my Vivint system, I would also be able to lock my doors, and control my lights and air conditioning too. If you’ve got a smart home setup, it would also have no problem talking to a thermostat from Nest or Honeywell (among others); smart light bulbs from a variety of makers including Philips, Hive, and TP-Link; as well as smart locks, smart plugs and outlets, appliances, and various other connected products.

Beyond giving commands to control stuff, Google Home is also the keeper of a wide range of knowledge. With the help of Google’s extensive search engine and its other software offerings, you can follow the phrase, “OK, Google” or “Hey, Google” with questions regarding sports, weather, traffic, or other random topics. For example, when making my way downstairs after waking up I would groggily say, “Hey Google, good morning,” and the Home would greet me, tell me about the weather for the day, then shoot me a quick rundown of what’s happening in the NBA. Worry not, non-basketball fans, you can customize what type of information is provided during this process, including NPR channels, various technology resources, and the BBC.

Even though I’ve had Google’s virtual assistant on my phone for quite some time, Home has made me take advantage of the relationship more often. Merely knowing that it’s there waiting for me to speak to it has increased the amount in which I use voice commands considerably, especially when it comes to utilizing my Chromecast-connected televisions.

Sure, I could have always used the assistant to launch Netflix or Spotify through my TV, but before I’d have to know if my phone was within earshot, and if my phone’s volume was low I wouldn’t know for sure if it even heard me. Instead, I have the comfort of knowing that Home is there waiting to carry out my commands at any given time. It’s also there to occupy my 6-year-old with riddles, jokes, and its ability to answer silly questions.

Certain requests, fortunately, require voice authentication to ensure that the right person is getting the right information or access to the right service. When inquiring about my calendar or making calls, for instance, if Home didn’t properly identify me as the person speaking (something established during initial setup), it would come back with a message stating that it won’t do what was being asked.

Google Home, like any other smart speaker, can complete plenty of tasks through voice commands. What matters even more than its breadth of knowledge and ability to control various devices is how well it detects and interprets those verbal orders. After all, if it doesn’t do well at interpreting your voice then you might as well use your phone instead.

With its pair of microphones, the Home—which was placed in the corner of my kitchen—was able to pick up my voice whether whispering up close, in a normal talking voice some 20+ feet away, or even with a commanding tone from the top of my stairs. At one point, I forgot my phone downstairs and wanted to watch Netflix via Chromecast in our master bedroom upstairs, so I just walked to the stop of my staircase and said, with a slightly loud voice, “Ok, Google, play Parks and Rec on Netflix to the Bedroom Chromecast” and I was good to go.

One day while my house was relatively quiet, Home stumbled when my two children and wife were talking while I was attempting to issue commands, or if music was playing from the unit itself at too high volume. In certain instances it would give a response along the lines of not understanding what I had said or that it doesn’t know what to do with what it heard, but more often than not it just wouldn’t register a request at all. This appears to be a common problem with smart speakers, at least the ones from Google and Amazon, as they both shared these characteristics.

With access to Google’s extensive search engine and various other services, Home has a lot of information within its reach. Simple requests regarding the weather, traffic, or sports were handled with ease. Other inquiries, such as information regarding Pablo Picasso, resulted in a summary of information found on the artist’s Wikipedia page. Similar responses came from general questions about musicians and performers as well.

Asking about how to make a particular dish came up with a recipe and Home would walk me through each ingredient the cooking instructions step by step. If I wanted to see the information laid out on my phone, I just had to ask to Home to send the information to my handset and it would show up.

Google’s virtual assistant can also comprehend multi-part and continuous conversations. I was able to put in a general inquiry about Bruno Mars, then follow up with “when did his last album come out?” and Home would know that I was still talking about the same artist. Then asking to “play his music” would initiate playback from Spotify. I could also ask it to “play Bruno Mars with the volume at 80%” and it would start the music from my default service at the requested volume level.

Of course, Google Home isn’t 100 percent accurate all the time. Instances when unrelated answers or unwanted actions would come up typically had to deal with words or phrases that sound similar. Questions about Bruno Mars would occasionally bring up info about the planet, and asking it to play “Pop Hits” always brought up a “Soft Hits” playlist. Sometimes wording was an issue. When streaming something from Netflix, “play the movie from the beginning” would result in her saying that she can’t do it, but “restart the movie” would work as intended.

Through Home I was also able to make calls to my phone’s contacts, acting as a speaker phone in the process. Unfortunately, I couldn’t send text messages, which, in many cases, is my preferred form of communication. This limitation, and others, are set by Google and not the device itself. Through the third-party app IFTTT, Home can work with a much wider selection of apps, including but not limited to, Twitter, Gmail, and text messaging. Amazon’s Alexa, on the other hand, has this type of external support built into its app, referred to as Skills. Essentially, if Amazon didn’t include a function, others can create it for users to find from inside the actual Alexa app instead of searching online.

Speaking of the Home’s competition with Alexa, the two companies are expectedly greedy with their own respective services. As of press time Google has pulled YouTube from Amazon’s Alexa and Fire devices, and although Alexa can give you useful updates on packages you’ve ordered through Amazon, the same can’t be done on the Home. Google Play Music, YouTube Music, Amazon Music, and Amazon Instant Video are accessible only through the smart speakers made by their creators as well. Apple’s brand new HomePod works in a similar manner, and who know knows when or if the services will ever cross over to other smart speakers.

And finally, what about music? I’m happy to report that at low volume or with sound blasting, the Home sounded great when playing music or in conversation. At higher levels it wouldn’t become distorted—something that happens when the competing Amazon’s Echo is at full volume—and audio adjustments can be done either by utilizing the capacitive surface or via voice commands like “turn down the volume to 30%.”

The Google Home smart speaker has an MSRP of $ 129.99, and it’s the exact same price on the Google store:

Get Your Virtual Pat-Down On In This TSA VR Simulator

Poll: Would you ditch your current AirPods for in-ear ‘AirPods Pro’ with noise…

How to stop WhatsApp from downloading photos automatically

Fill up your ebook reader with beautifully formatted free classics

Finally dark mode arrives to soothe your 3am WhatsApps

Lenovo Introduces Two 43-inch Ultrawide Monitors: One for the Gamer, One for the…

Inside Fin, the elite human/AI assistant