Galaxy Fold launch date will be announced in ‘coming weeks’ 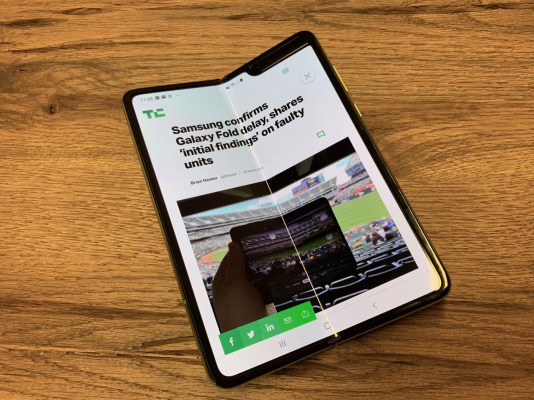 May has come and gone, and we’re nearly halfway done with June. All we seem to really know about the Galaxy Fold, on the other hand is that it’s still coming…at some point. In a comment earlier today, Samsung promised a launch date for the delayed foldable “in the coming weeks.” It’s a familiar refrain at this point, of course.

Initially planned for an April 26 launch, the hardware giant hit pause on the device after multiple problems were reported among a small batch of review units. Samsung initially placed the blame for display problems on reviews, but ultimately announced it was going back to the drawing board.

A month and half after the promised launched, we’ll still no closer to knowing the new date. It’s not a great look for Samsung, but it’s a hell of a lot better than subjecting the product to a pair of recalls a la the Galaxy Note. It’s a new category based around a new technology, so one ultimately can’t blame Samsung for being cautious here. Of course, the case could certainly be made that these sort of precautions would have been better to take prior to putting these out in the wild, but here we are.

Reviewers aren’t supposed to serve as beta testers, but the company is probably better off getting these issues out of the way before wider release.

The Robots are Returning in 2019 With Budget Cuts 2: Mission Insolvency

Explore a Strange and Beautiful World in Apollo: A Dream Odyssey

vivo X9s will come with the Snapdragon 660 on board, benchmark reveals

Before Seeing the Movie, Enjoy Some Fun Action in Teen Titans Go! Figure

Game Of Thrones: What Was In The Letter In Season 7, Episode 5? [SPOILERS]

Amazon Prime Day is now live for the next 30 hours, check Amazon for deals

Best Buy running a massive Apple Watch sale, save up to $270 on refurbished models

2018 Audi S5 Sportback: Bliss with a dash of lethargy