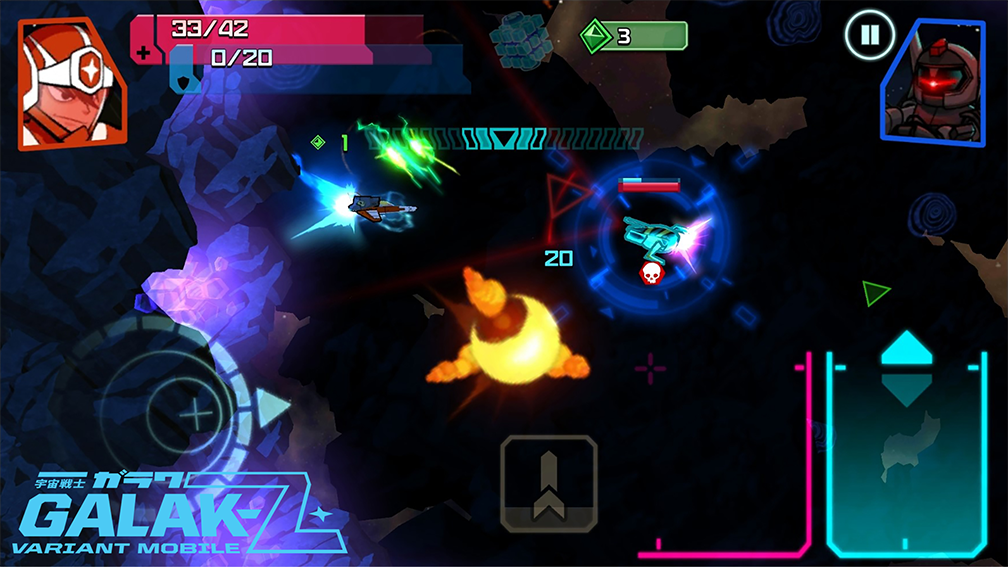 The RPG ecosystem in GALAK-Z: Variant Mobile is rich and well-balanced. Rewards, loot, and other items do not come thick and fast, as they do in other mobile action-RPGs, but that fits with the style of the game.

In contrast with the more casual fare that tends to come to mobile, GALAK-Z: Variant Mobile feels like a traditional arcade game given a coat of cutting edge, arcade-colored paint.

The combat is outstanding, whether you take the mech or the fighter into battle.

The mech is a close-quarters attacker, wielding a giant laser sword and a shield that protects you from head-on attacks. Whenever you lunge with your sword, however, you drop your shield for a moment, making you vulnerable to counterattack.

The fighter is a ranged attacker, firing missiles. You have no shield in the fighter other than the general one that applies to the whole craft. When you take a hit the shield takes damage first. When that’s gone your health starts to suffer, but if you can escape the bullets for a few seconds your shield regenerates.

Both vehicles have special attacks, and each of the environments you fight in is filled with features that can assist or harm you depending on how you use them. Sometimes you’ll come across lakes of lava, or crates full of dynamite, or giant ship-eating worms, any of which can ruin your day — or your enemy’s.

All this makes combat incredibly tactical and layered. You need to balance assault and retreat, somehow weaving between terrifyingly accurate missiles, using the environment to inflict a bit of extra damage or box your opponents in when you can.

The controls and vehicle physics are tight and intuitive, and it’s totally possible to overcome a difficult level through good old-fashioned arcade skills. There are even juking dodges and reverse movement, giving you huge scope for mastery.

Yes, this is an RPG, and you probably won’t get far without staying on top of levelling and upgrades, but even so GALAK-Z: Variant Mobile is one of the few games in this genre that understand the importance of action in an action-RPG.

Become a Cisco-certified networking master, and learn for more than 90 percent off

This misanthropic artist taught Google Home to fire a gun

Sprint's Unlimited Kickstart is back, but priced higher at $25 per month

SIGGRAPH 2019’s Immersive Programme Will be the Biggest to Date

Huawei’s plans for an Android alternative are crazy, but necessary