For thousands of US auto workers, the downturn is already here

LORDSTOWN, Ohio – Wall Street is fretting that the auto industry is heading for a downturn, but for thousands of workers at General Motors factories in the United States, the hard times are already here.

Matt Streb, 36, was one of 1,200 workers laid off on Jan. 20 – inauguration day for President Donald Trump – when GM canceled the third shift at its Lordstown small-car factory here. Sales of the Chevrolet Cruze sedan, the only vehicle the plant makes, have nosedived as consumers switch to SUVs and pickup trucks.

Streb is looking for another job, but employers are wary because they assume he will quit whenever GM calls him back.

“I get it,” said Streb, who has a degree in communications, “but it’s frustrating.”

Layoffs at Lordstown and other auto plants point to a broader challenge for the economy in Midwestern manufacturing states and for the Trump administration.

“This is about economics, not what Trump says. Even if Trump went out and bought 10,000 Cruzes a month, he wouldn’t get the third shift back here.”

The auto industry’s boom from 2010 through last year was a major driver for manufacturing job creation. The fading of that boom threatens prospects for US industrial output and job creation that were central to Trump’s victory in Ohio and other manufacturing states.

“This is about economics, not what Trump says,” said Robert Morales, president of United Auto Workers (UAW) union Local 1714, which represents workers at GM’s stamping plant at Lordstown. “Even if Trump went out and bought 10,000 Cruzes a month, he wouldn’t get the third shift back here.”

Last week the Federal Reserve said factory output fell 0.4 percent in May, the second decline in three months, due partly to a 2 percent drop in motor vehicles and parts production.

Mark Muro, a senior fellow at the Brookings Institution, has compiled data from government sources that show the auto industry punching higher than its weight in job creation in recent years – accounting for between 60 percent and 80 percent of all US manufacturing jobs added in 2015 and 2016.

In the first quarter of this year, the auto industry accounted for less than 2 percent of the 45,000 manufacturing jobs created.

“There’s no argument with the idea that auto has been pulling the manufacturing sled up the mountain for the last three or four years,” Muro said. “If you take auto out, you’re left with a very tepid outlook indeed.”

Long-term auto layoffs could threaten the economies of communities and states directly affected, although after decades of boom and bust, many communities in the auto manufacturing heartland have diversified.

In Ohio’s Mahoning Valley, which was battered by the collapse of the once-dominant steel industry, the boom in drilling for shale gas helps offset job cuts at auto plants.

Lordstown Mayor Arno Hill says the town salted away money during the boom to pay down its debts and new businesses are coming in, including a $ 900 million power plant being built in town that will burn cheap natural gas produced in the region.

“GM is still the brightest star in the Mahoning Valley, but luckily we have diversified our economy,” Hill said. “There is pain for the laid-off workers, but it won’t hurt us as bad it used to.”

Lordstown’s workers have taken steps to blunt the impact of layoffs, with help from GM.

Matt Streb’s wife is due to start work soon after getting a degree, while he hopes to return to a former job as a mailman. In the meantime, GM gave advance notice of job cuts so he saved extra money and has drastically cut his spending.

“The auto industry is cyclical and has always had its ups and downs,” Streb said. “This is just another Lordstown downturn.” 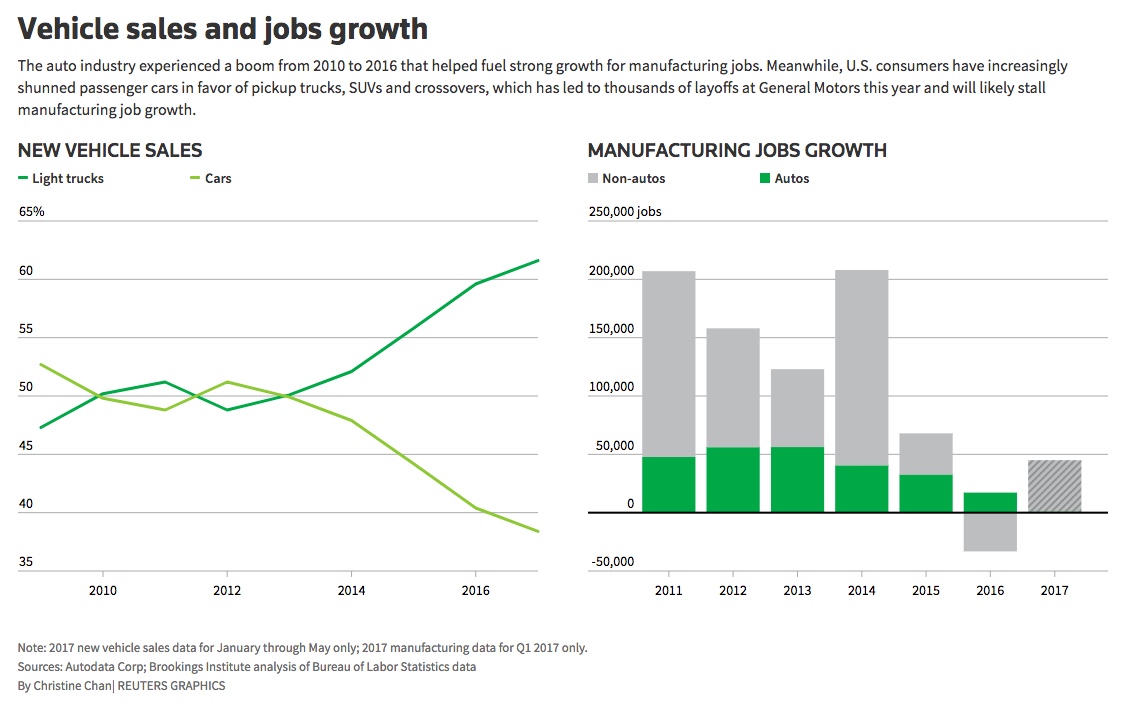 The decline in auto sales is still minor compared to the dramatic collapse during the 2007-2009 financial crisis, when demand for new vehicles plunged to its lowest levels in decades.

However, the days when auto assembly and parts plants throughout the Midwest were running flat-out because of high demand for nearly every type of vehicle are over. Recent sales trends show consumers becoming more selective, shunning older models and especially smaller cars.

For much of the boom that ran from 2010 through to a record year in 2016 of 17.55 million new vehicles sold, the share of cars has declined versus “light trucks” – or pickup trucks, SUVs and crossovers.

After peaking at 51.32 percent of all sales in 2012, passenger cars fell to 40.4 percent of sales in 2016. That decline equates to the output of seven or eight vehicle assembly plants.

Through the first five months of this year, sedan sales fell 11 percent, even as the light truck category rose 4.7 percent.

To avoid profit-sapping discounts, and reverse a decline in prices of used vehicles, automakers are ordering more and deeper production cuts.

GM has laid off more than 5,000 workers so far this year – including 1,000 at its Fairfax plant in Kansas that makes the Chevrolet Malibu midsize sedan. GM has also laid off 1,100 workers at a plant in Lansing because it has ended production of the GMC Acadia SUV there.

More GM workers will be hit with temporary layoffs this summer. Lordstown will shut up shop for five weeks this summer, much longer than the usual two-week summer vacation closure. 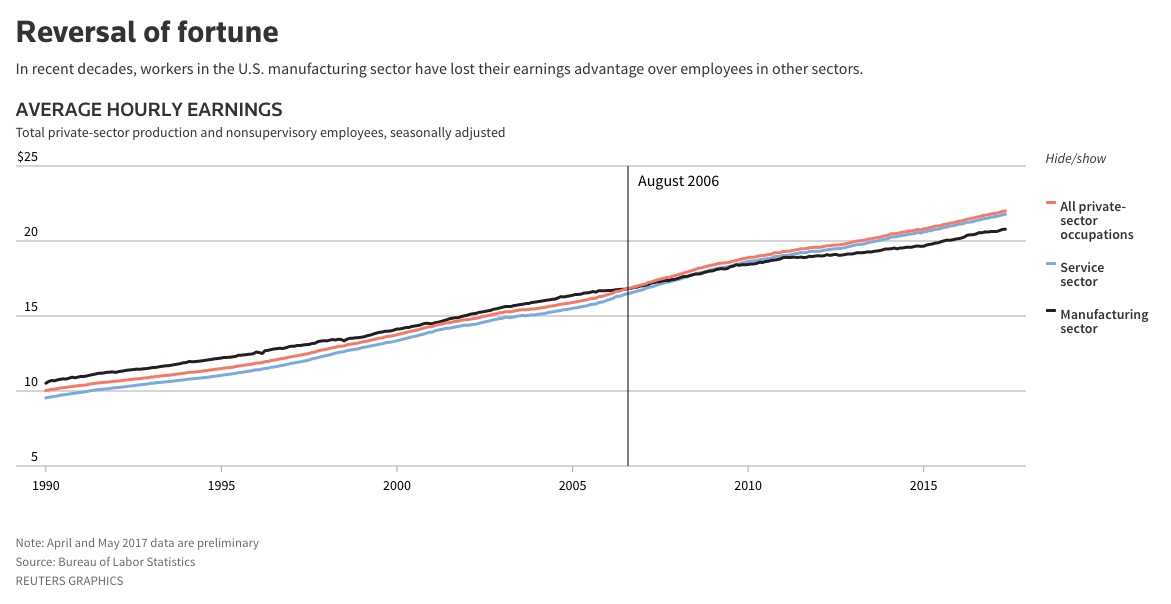 Many laid-off GM workers are finding temporary employment at other facilities or taking permanent transfers to plants like its Arlington, Texas, facility where production of large sport utility vehicles continues unabated. However, those temporary postings require workers to relocate hundreds of miles from home.

Randy Freeman, president of UAW Local 652 which represents workers at GM’s Grand River plant in Lansing, Michigan, which makes sedans, says he has been pleased by GM’s efforts to rehire workers and relations with the automaker “are on an upward swing.”

The threats to US workers building sedans are not likely to ease, barring a spike in the price of gasoline. Ford signaled its long-term pessimism about small-car demand in the United States by announcing plans on Tuesday to shift production of its Focus compact car model to China. The Michigan plant that builds the Focus currently is expected to switch to building trucks and SUVs in 2018.

At GM’s Lordstown and Lansing Grand River plants, UAW representatives say they are focused on improving quality in the hope that GM will pick their plant when it’s time to find a location for producing a new truck or SUV.

At Lordstown, for instance, union officials tout the fact the plant has just won a quality award for local innovation on a part that helps the Cruz run better.

“We’re working hard to make the best product we can,” said Glenn Johnson, president of UAW Local 1112 at Lordstown, “so we can raise our hands and say to GM ‘look at what we can do.”

Photoshop coming to iPad in 2019

A bot on Amazon is making the best, worst smartphones cases

Yazaki finds humans are essential, not obsolete, for the future

Our First Look At Microsoft HoloLens 2