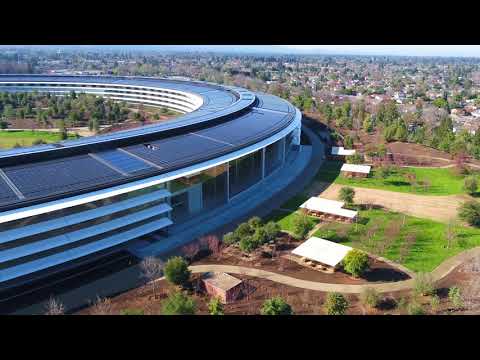 The first part of Sinfield’s new video focuses on the landscaping within Apple Park’s courtyard, which is still being finished up in the new year. Greenery now covers most of the space and surrounds the main water feature, which is complete. Landscaping has been a major part of the last few Apple Park drone videos — most recently in one shared by Matthew Roberts last month — with most of the large equipment moved off of the campus since the majority of construction is now complete.

In the new video, you can also briefly see the Steve Jobs Theater and Apple Park Visitor Center. The main atrium is captured, as well as the outside dining terrace where employees can sit and eat lunch. One of the areas where construction remains ongoing is the piece of land between the Steve Jobs Theater and the main spaceship building, where some vehicles and equipment remain inside of a red fence.

Although small pieces of construction and landscaping remain, employees have already moved into Apple Park and the Visitor Center opened to the public last November. Next month will mark one year since Apple officially named the campus “Apple Park,” at the time explaining that it would take more than six months to move its planned 12,000 employees to the site.

Is Bitcoin about to split? 4 possible scenarios

Designing custom robots in a matter of minutes

WSJ: Apple to drop LCD in favor of OLED on all new iPhones from next year

How to Use the chroot Command on Linux