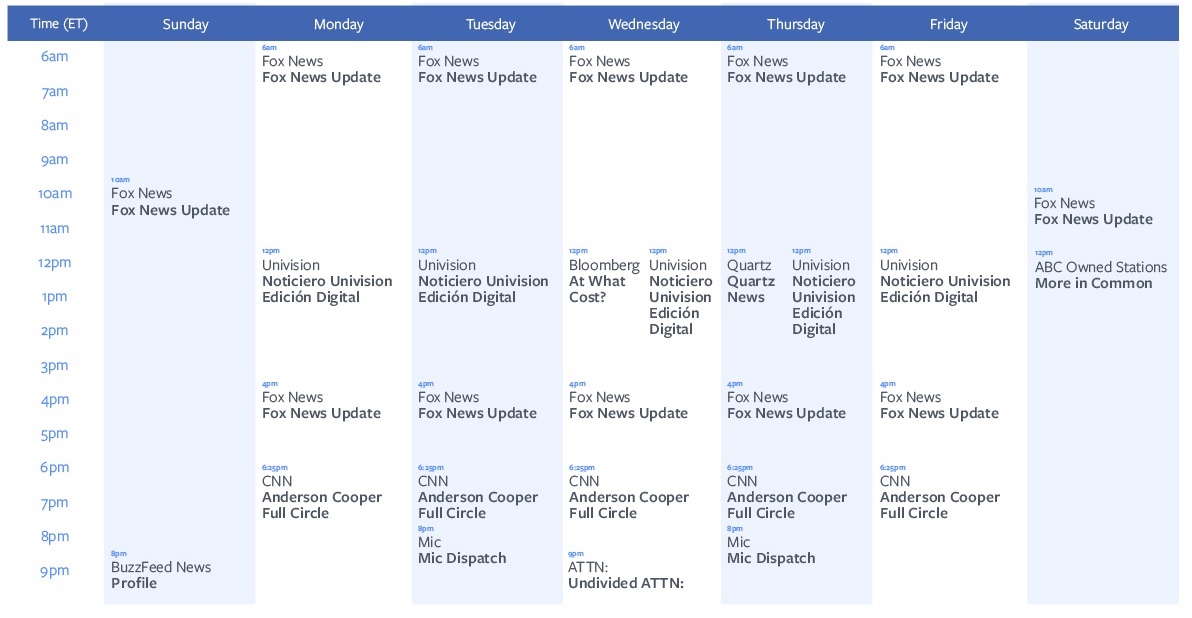 Facebook this week unveiled the schedule for its funded news shows, and it could use a little diversity — the entire slate is dominated by two shows.

I really hope you like Anderson Cooper and/or Fox News, because both of those combined take up about 80 percent of the schedule — Fox News in particular is on every single day of the week. There are shows from the likes of Buzzfeed, Mic, and Telemundo sprinkled in between them.

This doesn’t mean the slate is bad (though I think I’ll have reached my Shepard Smith saturation point within two hours of his weekday reporting), but it does mean users will be getting a limited news picture until Facebook can find other programs to break up the Fox News monotony.

The entire slate is funded by Facebook itself, in an attempt to counterbalance the site’s tendency to be a haven for sketchily-sourced news. Facebook assures users more shows will launch over the course of the summer, and this slate is just the first iteration. It’ll premier July 16.

Facebook‘s had a bit of … ooh, let’s be generous and call it a “rocky history” with trustworthy news sources. The rise of fake news was a favorite criticism of Facebook before the Cambridge Analytica scandal eclipsed it — but the site is still working on rebuilding trust in its news.

In January, Mark Zuckerberg committed to fixing Facebook’s fake news problem, as he said the :

Social media enables people to spread information faster than ever before, and if we don’t specifically tackle these problems, then we end up amplifying them. That’s why it’s important that News Feed promotes high quality news that helps build a sense of common ground.

Watch, Facebook‘s answer to YouTube, has been receiving a great deal of attention from the company as it attempts to carve out a piece of the video and livestream market. Once the slate becomes a little less (for lack of a better word) boring, it might actually help give Watch an edge.

Samsung to bring its new Galaxy Watch at IFA 2018

The GPU Market Got Pulverized in the Back Half of 2018

Author of GIGGED, Sarah Kessler, is sharing her thoughts on the gig economy – tune in…

5 Major Changes Between The Ready Player One Book And Movie

Doogee S70 is a rugged gaming phone that will be crowdfunded