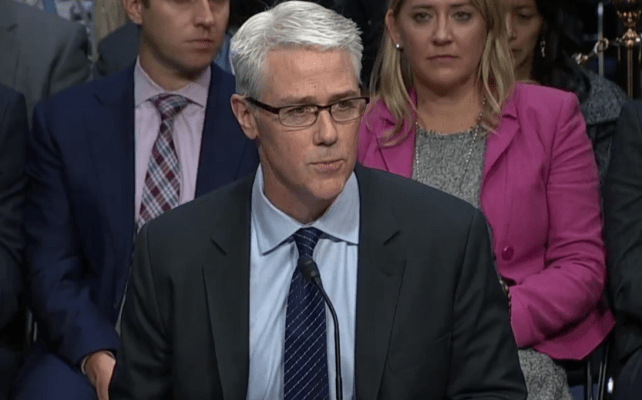 Facebook’s chief legal officer Colin Stretch has announced he’ll be out by the end of the year.

In the inevitable Facebook post explaining why he’s moving on, Stretch writes that after he and his wife made a decision to move back to DC from California “a few years ago… we knew it would be difficult for me to remain in this role indefinitely”.

“As Facebook embraces the broader responsibility Mark [Zuckerberg] has discussed in recent months, I’ve concluded that the company and the Legal team need sustained leadership in Menlo Park,” he adds, saying he’ll stay to the end of the year to help with the transition.

Facebook has had a very awkward two years so far as politically charged scandals go. First revelations about the massive Kremlin-fueled election interference which it totally missed. Then the massive Cambridge Analytica data misuse debacle which Facebook also claims to have totally missed, even though it (still apparently) employs one of the academics whose quiz app was the vehicle used to suck out people’s data.

Since then a bunch of follow-on admissions have flowed from the company confirming that access to user data on its platform wasn’t as locked down as it’s historically liked to claim — albeit, despite masses of evidence to the contrary.

Nor, perhaps, as the FTC might have expected give a 2011 privacy settlement with the company. The regulator has now opened a fresh investigation. Meanwhile Facebook is carrying out a retrospective app audit — a not so tacit admission about its abject lack of enforcement of its own developer policy.

And yet there have not — at least publicly — been any heads rolling at Facebook despite all this failure.

Most likely because, as founder Mark Zuckerberg recently told Recode’s Kara Swisher during a podcast interview: “I designed the platform, so if someone’s going to get fired for this, it should be me.”

Of course Zuckerberg isn’t going to fire himself. Not when he doesn’t have to. Given the structure of the company he’s sitting pretty on his CEO throne, no matter how tarnished that crown now is.

Instead of firing himself — let’s not forget his 2016 attempts to dismiss the notion of Facebook-enabled election interference as a “pretty crazy idea” — Zuckerberg once again fired up his multi-year apology tour for privacy and data-related screw ups, rolling this through 2017 and  2018, as fresh scandals rocked the company’s reputation. And raised the specter of regulation to control damaging activity on the platform that the company has spectacularly failed to control.

Though you’d be hard pressed to read any of this scandalabra just by looking at the company’s earnings and stock price. Perhaps because investors view any regulation as likely to cement Facebook’s dominance, rather than upset the apple cart in a way that could allow a younger model to come in and disrupt its grip on consumers’ eyeballs.

Even so, 2018 has seen Zuckerberg, if not literally dragged but politically compelled to appear in front of US and EU lawmakers — where he faced a barrage of questions; some dumb, others cutting to the heart of the company’s contradictions and its contradictory claims.

Last year Facebook’s chief legal officer Colin Stretch was also in the Senate, alongside reps from Google and Twitter, fielding awkward questions about Russian election interference and the spread of extremist content on the platform.

There Stretch made an unfortunate slip of the tongue during his introductory remarks — seemingly saying “keeping people unsafe on Facebook is critical to our mission” before quickly correcting himself to stress he’d meant to say “keeping people safe”. As Freudian slips go it’s a doozy.

But it’s certainly not a great time for Facebook to be losing its general counsel. Not with so much ongoing political and legal risk. Although if Zuckerberg isn’t going to go then perhaps other Facebook veterans will feel compelled to leave on his behalf.

With the usual departing platitudes, Stretch writes: “This has not been an easy decision. Companies are made up of people, and the people here are talented, caring, and most of all committed to doing the right thing. Even now, eight-and-a-half years after I started, I often stop myself and ask how I got so lucky to be a part of this.”

“There is never a ‘right time’ for a transition like this, but the team and the company boast incredible talent and will navigate this well,” he adds.

In March it also emerged that Facebook would likely be parting ways with its long-time chief security officer, Alex Stamos, this summer — after the New York Times reported on internal disagreements between the CSO and other  execs, saying Stamos had wanted Facebook to be more public about the misuse of its platform by nation states.

This week BuzzFeed News obtained an internal memo sent by Stamos in March, days after he had confirmed his plans to leave the company, in which he writes: “I was the Chief Security Officer during the 2016 election season, and I deserve as much blame (or more) as any other exec at the company.”

Though he demurs on confirming whether he has actually quit for real at that point — but does admit to having had “passionate discussions with other execs”, including, seemingly, about Facebook’s approach to sharing public data on Russian disinformation.

“The world has changed from underneath us in many ways. One change has been the thrusting of private tech companies into the struggle between nation-states,” he writes on this. “Traditionally, the standard has been to report malicious activity by adversary nations to US law enforcement. We are moving into a world where the major platforms are going to be expected to provide our findings, attribution and data directly to the public, making us a visible participant in the battle between cyberwarfare titans.”

“This is an uncomfortable transition, and have not always agree with the compromises we have struck in the process. That being said, I believe my colleagues have all approached the process in good faith, and together we have sorted through legitimate equities that needed to be weighed,” Stamos adds.

Stamos goes on to implore colleagues to make major changes “to win back the world’s trust” — including rethinking the metrics Facebook fixes itself to as a business; being more adversarial in its thinking when building products and processes; and — in what looks very much like a swipe at the company’s use of dark pattern design in its consent flows — re-engineering how it gathers user data to be more honest and minimize (rather than maximize) data collection.

On that it’s worth noting that privacy by design is a core plank of Europe’s new data protection framework, GDPR — which Stamos is seemingly describing at one point in the memo, without giving it a literal name-check.

“We need to build a user experience that conveys honesty and respect, not one optimized to get people to click yes to giving us more access. We need to intentionally not collect data where possible, and to keep it only as long as we are using it to serve people,” he writes [emphasis his]. “We need to find and stop adversaries who will be copying the playbook they saw in 2016. We need to listen to people (including internally) when they tell us a feature is creepy or point out a negative impact we are having in the world. We need to deprioritze short-term growth and revenue and to explain to Wall Street why that is ok. We need to be willing to pick sides when there are clear moral or humanitarian issues. And we need to be open, honest and transparent about challenges and what we are doing to fix them.”

Learn the secrets of ethical hacking for $25

Apple iPhone 8 event: What to expect

How to Fix the Black Wallpaper Bug on Windows 7

How to Find and Replace Special Characters in Microsoft Word

Our Huawei Mate 20 video review is up

XR for Enterprise: How to Gain Buy In and Prove its Value – Lockheed Martin, AECOM,…

‘Lucifer’ lives on with a fourth season coming to Netflix

AIOps is Marching into the Mainstream, Replacing IT Ops