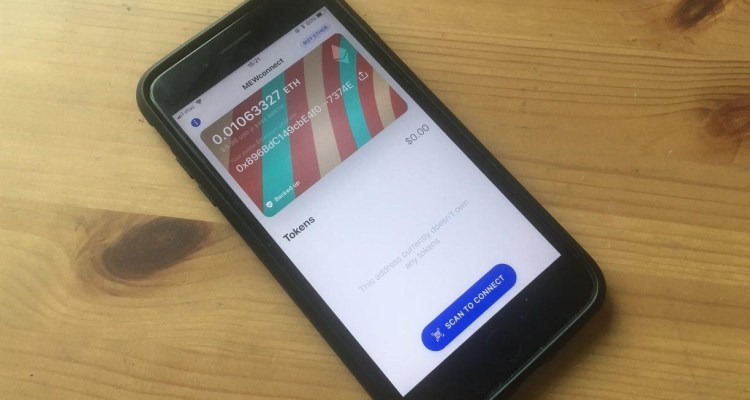 MyEtherWallet, the most popular crypto wallet service on the internet, is finally getting a mobile app as it bids to increase security for its users.

Today the company introduced MEW Connect, an iOS app that allows users to access their wallet through MyEtherWallet but without the need to type their private key. There are already solutions that allow them — such as hardware keys from Trezor and Ledger — but MEW Connect is offering the benefits for free.

The app is launching in the coming days as a limited iOS beta. Given that the website receives over 600,000 visitors per day, demand for the beta is likely to be high. Those who aren’t successful this time around shouldn’t have too long to wait as a full launch is expected to come by the end of September. An Android version also in the works and it is expected to be released around the same time.

How does it work?

It’s really quite simple. The app uses a QR code scanner which replaces the need to enter a private key. Entering information like a private key on a website is something that people have always been warned against doing. Recent analysis suggests that over $ 7 million has been stolen via phishing attacks on wallet services, but still people can be lazy or reluctant to buy a hardware wallet, so its a practice that continues to happen.

Now, using the MEW Connect app you simply scan a barcode on MyEtherWallet.com which opens your wallet account using a peer-to-peer connection.

On the technical side, MyEtherWallet confirmed it is using Apple’s keychain services to encrypt the app — which it said retains data on-device — and pair it with the web-based peer. There are plans to utilize the Touch ID feature in iOS in the future but the feature is currently absent.

The app itself requires a master password to be set first — the app scores passwords and encourages stronger ones — and it provides a set of backup words, much like a device from Trezor or Ledger. The master password is designed to prevent unauthorized access, for example, if you lose your phone. The backup words, meanwhile — which should be written down on paper and stored carefully — are the key to getting access to your wallet in the event that you lose your phone.

That’s essentially it at this point. The app exists to remove the need to enter a private key. In testing, it worked fairly consistently across different browsers and computers I used, although there could be issues as with all alpha versions of software.

What’s particularly exciting, however, is what the app could become as and when it adds new features.

The main app screen includes a debit card style design and it’s easy to imagine that some form of payments, most obviously peer-to-peer, could be added to massively simplify the process of sending crypto.

But that’s not going to happen soon, according to MyEtherWallet founder Kosala Hemachandra, who told TechCrunch that he doesn’t want to rush introducing new features. Hemachandra said the intention is to move slowly to ensure users are comfortable with the app, but he did admit payments are on the roadmap.

“That’ll be the best use case for crypto we can implement in the near future,” he said in an interview. “If you want to go mainstream, that’ll be a huge advantage for the whole industry. First, we want people to get used to this MEW Connect concept, scanning a QR code and creating a P2P link.”

For now, the app does include a link that lets people buy crypto via a third-party. That’s an approach MyEtherWallet has taken on its website service, and the affiliate money generated from that is enough to make the business profitable, cover payroll for its staff of 15 and generally keep the business sustainable.

Hemachandra said he knocks back interest from investors on a daily basis.

“I’m not really a fan of VCs,” he said candidly.

For the beta launch, Hemachandra said he’s hoping that lots of bugs are unearthed to improve the app experience.

“My hope is beta users will be developers who can go through our code. I really believe in open source and we don’t plan to hide anything,” he said.

Like MyEtherWallet.com, the plan is to publish the code for the MEW Connect iOS and Android apps online to allow scrutiny from the community. Given the reach of MyEtherWallet, this is definitely one project to keep a keen eye on.

Another is MyCrypto.com, a similar service whose founders include Hemachandra’s former business partner at MyEtherWallet, Taylor Monahan. The company recently removed private key access from its website for the same reasons to the launch of MEW Connect, user safety.

“Mass adoption of cryptocurrencies is unlikely in a world where a mis-click can cost you your life savings. Tragically, even when a user takes painstaking precautions in verifying that they are on the correct site before entering their private key, a compromise of the site itself can still result in a total loss of user funds,” MyCrypto.com CTO Daniel Ternyak explained in a blog post.

That two of the web’s largest wallet services are moving on from private keys is an important step for the crypto industry.

G20: Cryptocurrencies are okay, blockchains are great, and money laundering is still a problem

Galaxy S9 and S9+ pre-orders start in Canada as well

Roundup: Everything we know about the iPhone XS

To control AI, we need to understand more about humans

Official Oculus Link Cable Now Available, But Is It Worth The $80 Price Tag?