Finishing up its teardown of the latest 13-inch MacBook Pro, iFixit on Monday noted that the computer has bigger battery and speaker components, which appear to have come without an increase in overall weight. 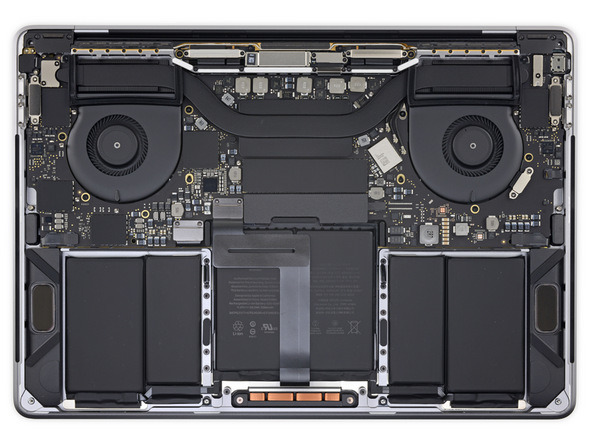 The system has upgraded from a five-cell, 49.2 watt-hour battery to a 58 watt-hour six-cell part, the repair firm said. The battery is indeed slightly heavier, up to 232.7 grams (8.2 ounces) versus 196.7 (6.9 ounces). Updated speakers are both “longer and narrower,” to the point that they bump up against the logic board.

To compensate, Apple appears to have cut some mass off of the top case, iFixit indicated.

The teardown mostly illustrates expected features of the Pro, such as its T2 co-processor for functions like “Hey Siri,” security, and boot operations. One other point of interest however is its modified power adapter, model A1947, which has more shielding as well as added impact-resistant foam, at the expense of switching from a metal USB-C port to plastic.

The Pro is as hard as ever to repair, with a soldered processor and memory, and the upper case — including the battery, keyboard, and speakers — forming a single unit. The one significant improvement is said to lie in the trackpad, which can be removed by extracting several Torx screws.

Apple’s new Pros have a variety of upgrades over 2017 models beyond standard processor and memory upgrades. These include Bluetooth 5.0, and the first use of True Tone color balancing on a Mac.</span>

Thoughts on Chromebook, iPad, and user focused IT departments

KGI: Apple could sell just 2 million HomePods across all of 2018, company ‘mulls’…

Facebook built a map that tracks COVID-19 symptoms by county

Geek Trivia: What Is The Name of Wikipedia’s “Official” Theme Song?

Want to find out which viral photos were Photoshopped? So does Adobe

Intel to Speed Up Quantum Computers With Cryogenic Chip