Apple’s self-driving car technology could potentially change the way it drives based on the reactions of its passengers, using monitoring sensors to analyze the vehicle’s occupants and determine an appropriate driving style to suit the situation, potentially reducing the chance of a passenger panicking. 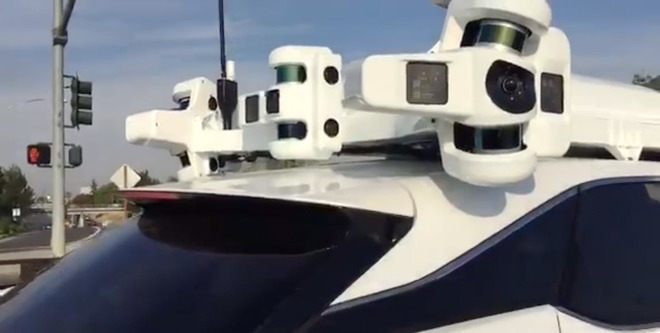 The patent application for “Comfort Profiles,” filed with the U.S. Patent and Trademark Office in March but published on Thursday, describes how an autonomous driving and navigation system can move through an environment, with motion governed by a number of factors that are set indirectly by the passengers of the vehicle.

A sensor device located at the front of the vehicle’s cabin could potentially monitor some or all of the people in a car, which could be used to identify individuals. These internal sensors can include light-scanning devices like LIDAR, depth cameras, and infrared sensors to collect the data, which is then passed on to the driving system.

While driving, the sensors could be used to ascertain an occupant’s eye movements, body posture, gestures, pupil dilation, blinking, body temperature, heart bear, perspiration, head position, and other factors of each passenger. This data, and previous experiences of known users, can be used to create an occupant profile, and in turn enable the vehicle to select one of a number of comfort profiles. 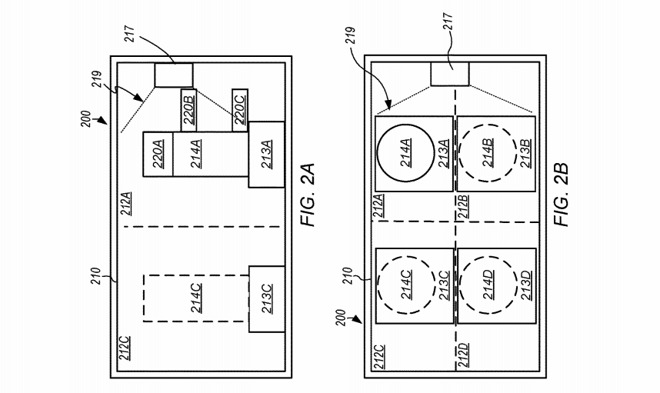 A comfort profile dictates how the vehicle drives, changing a variety of settings so the car moves with as much comfort for the user or users as possible. These driving control parameters can include adjusting the straight-line acceleration, the turning rate, how fast the car can perform lane changes, the stiffness of the suspension, enabling or disabling traction control, and other elements that dictate how the vehicle ultimately moves.

As the system continues to take in live data, the comfort profile can be altered if the state of the passengers changes. For example, if it detects the stress level of a passenger rises during a fast turn, it could move to a different comfort profile that is slower and smoother, in an effort to remove that stress. 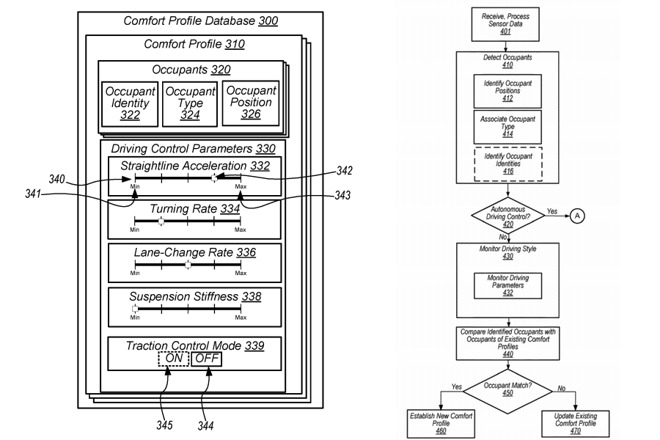 Apple’s “Project Titan,” the codename used for the self-driving technology, was originally thought to be part of a branded car, but the focus changed to the autonomous vehicle technology in late 2016. Apple does perform testing of its self-driving systems, including recently increasing its fleet of test vehicles in California to 66 cars, and is thought to be working with Volkswagen on the PAIL program, which would ferry employees between offices using autonomous vans.

The project has also been the subject of attempted trade secret theft, with one employee accused of stealing a 25-page detailed schematic of a circuit board intended for use in an autonomous vehicle. The employee entered a plea of not guilty on July 16.

Apple applies for a large number of patents on a regular basis, and the publication of any applications or granted patents by the U.S. Patent and Trademark Office is not a guarantee that the concepts described will make it to consumer device, if at all.

In March, it was revealed Apple is still considering ways for passengers to interact with self-driving cars, with patent applications suggesting hand signals and gestures could be used to direct the vehicle on the road. Another application uses the external sensors of the vehicle to recognize gestures and hand-based commands given by traffic directors, such as police turning traffic away from an accident. </span>

Facebook fixed that bug that opened your camera without permission

ARKit Project Shows Turn-by-Turn Directions in AR, Giving a Glimpse into Future of…