Following the worldwide debut of “Today at Apple,” Apple in July will launch this year’s summer camps for kids at its retail stores, aimed at those between ages 8 and 12. The free “Apple Camp” will educate kids on how to create characters, make movies, design storybooks, code robots, and more while using Apple products (via Macworld). 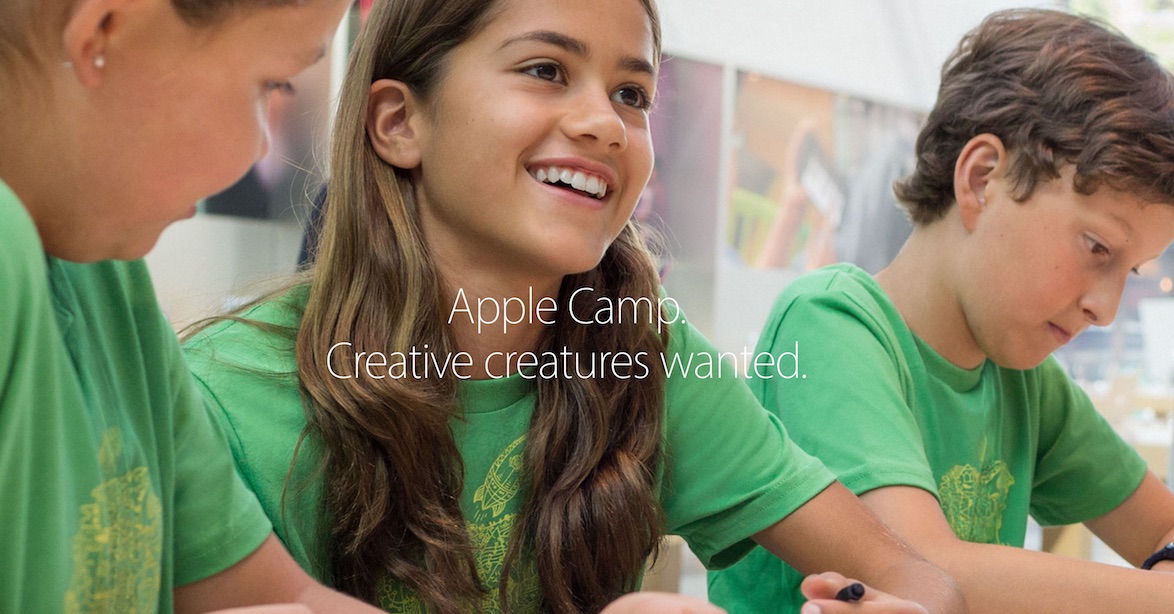 Apple Camp’s workshops this year include Coding Games and Programming Robots, Creating Characters and Composing Music, and Stories in Motion with iMovie. Each workshop is designed as a series of three 90-minute classes that kids visit on three separate days.

For the first two days kids will work on projects specific to the session they choose, while the final day will be a show and tell where they present their final project to parents, friends, and fellow Apple Campers.

Creating Characters and Composing Music: Kids ages 8-12 will create their own stories through drawings and sounds. Campers will start their session by sketching characters and scenes with iPad Pro and Apple Pencil, then they’ll explore the basics for composing a track using GarageBand. They’ll bring their story to life by adding vocals and finishing touches.

Stories in Motion with iMovie: Future filmmakers ages 8-12 will explore the creative process of turning their ideas into real movies. In this three-day session, Campers will learn how to brainstorm and storyboard. Then they’ll get hands-on with movie-making techniques like learning camera angles and editing with iMovie. On the final day, they’ll present their masterpieces.

Coding Games and Programming Robots In this three-day session for kids ages 8-12, we’ll introduce programming through interactive play. Kids will learn visual-based coding by solving puzzles with Tynker. Then they’ll learn how to program Sphero robots, and even create fun stories starring Sphero as the main character.

Apple Camp will begin July 10 and run through July 28, and registration is up now on Apple.com. Today at Apple also offers other kid-focused sessions called “Kids Hour,” with more classes teaching coding as well as basic knowledge of GarageBand and iMovie.

Instagram is still clobbering Snapchat, and it's worse than we thought

Geek Trivia: In 1922, Phone Lines In The U.S. Were Silenced To Observe What?

Facebook and Twitter’s new focus on ad transparency is a welcome, flawed improvement

Tableau is the must-know tool for data pros. Start learning for $25

The Simpsons Movie 2 In The “Very Earliest Stages,” May Never Happen

The Best Cleaning Implements For Washing Your Car Or Truck

Lenovo Z6 Pro in for review