Apple spends $150M a year on United flights, Shanghai is No. 1 destination

A pair of promotional banners created by United Airlines to tout its various business relationships with big-name companies reveals a sneak peek into Apple’s global operations, with the tech giant reportedly spending some $ 150 million each year on flights for employees. 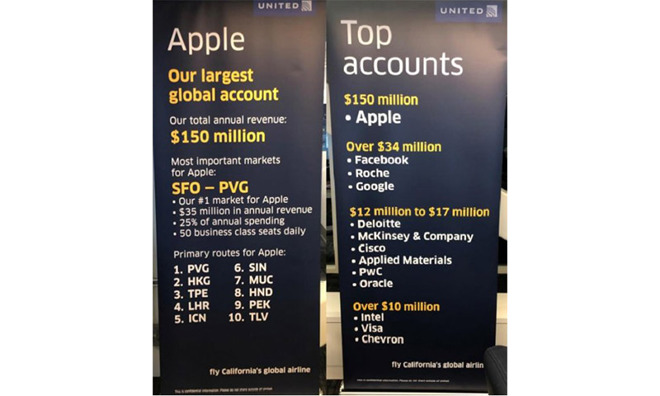 The signage, spotted by LAFlyer, is on display at United’s terminal in the San Francisco International Airport, the jumping off point for many Apple-purchased flights. SFO serves residents and scores of tech companies operating in the Bay Area and is less than an hour’s drive from both Apple’s One Infinite Loop and Apple Park headquarters.

Generating $ 150 million in yearly revenue, Apple represents United’s largest global account. Others on the list, including Facebook, Roche and Google, are credited as contributing “over $ 34 million” a year in revenue to United’s bottom line.

Interestingly, the airline goes into specifics regarding Apple’s movements, noting Shanghai as the company’s most important market. More pointedly, Apple spends $ 35 million on flights from San Francisco to Shanghai Pudong International Airport — an average of 50 business class seats daily — representing a quarter of its annual spend with United.

Shanghai acts as a major hub for scores of regional airports in China, many of which are located near Apple’s numerous partner suppliers across the country.

Outside of Shanghai, Apple’s top-ten destinations include Hong Kong, Taipei, London, South Korea, Singapore, Munich, Tokyo, Beijing and Israel, respectively. As can be expected, Apple owns office space or deals with suppliers based in each of those locations.

Though the promotional material is designed to goose confidence in United’s business, it also provides valuable insight into Apple’s behind-the-scenes operations that goes beyond information found in quarterly earnings reports and other public disclosures.

It should be noted that the statistics offered by United relate mainly to San Francisco operations. Thousands of Apple employees are stationed at other U.S. campuses, like facilities in Texas and North Carolina, and likely rely on United for their business travel needs. </span>

How to Convert a Numbers File to CSV on Mac

Facebook really doesn’t want you to read these emails

Gadget-Bot Talk About Kaidro: The Awakening in These Dev Diaries

SIGGRAPH 2017: Convert Your Oculus CV1 Into An OptiTrack Headset With This Face Plate

How to Enable the Mac Startup Chime on Newer Macs