Apple shares rebounded in pre-market and regular session trading on Wednesday as investors appeared to shrug off the potential of escalating tensions between the United States and Iran. 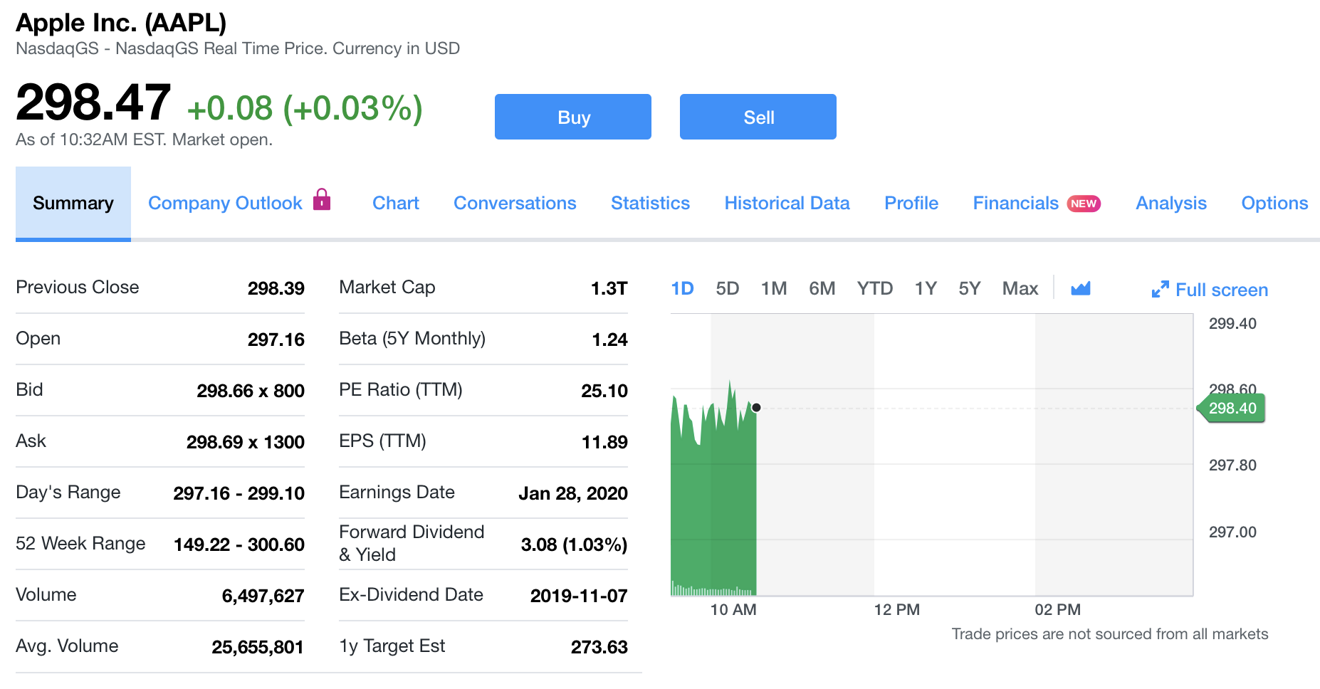 On Tuesday, Apple stock fell from a new high near $ 300 on concerns that a protracted war might erupt. In after-hours trading, Apple fell even further, down to $ 292, on news of a retaliatory missile strike by Iran. That wild but temporary drop in after-hours trading represents the increased volatility—and often irrationality—in the low volume trading that occurs outside of the market’s ordinary trading session.

But the resilience of Apple shares—even in response to serious threats to the health of the global economy—demonstrates one of the benefits the company has realized from its massive share buyback program that has taken place across the last decade.

In using its cash to buy back its shares and retire them, Apple has concentrated the value of its remaining shares for its investors. The buyback program has also had the effect of taking shares away from traders willing to sell on negative news. That appears to have significantly eliminated the weak hands remaining among the company’s investors, resulting in less irrational fluctuations.

Analysts who formerly appeared capable of knocking billions of dollars off of Apple’s valuation by simply issuing a fearsome report speculating about competitive pressures are now seeing a very limited response to their warnings. In part, that may likely be due to their widespread failures to predict or interpret the direction of the market.

For some reason, this fundamentally incorrect portrayal of Apple was branded by CNBC as the insight of a “top analyst.” The network even framed Sacconaghi as being the “#1 Apple Analyst,” indicating that the network has no better grasp of qualitative valuations than Sacconaghi. 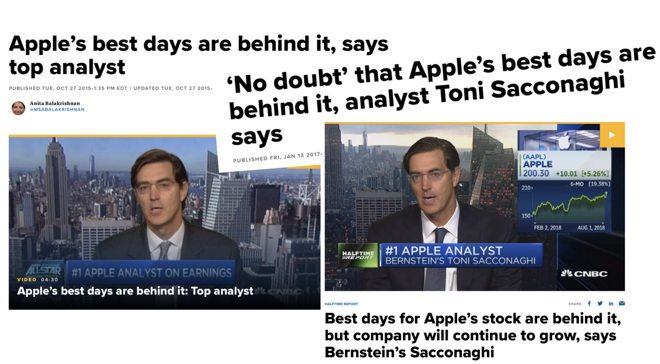 In December, Sacconaghi finally admitted—on CNBC no less—that “We have been neutral on Apple this year and it’s been the wrong call. We missed it.”

But that mea culpa occurred only after Apple’s share price rocketed into record territory as it marched toward its current valuation near $ 300, increasing by 86% within the last year as it reached a market cap of $ 1.3 Trillion—the highest achieved by any tech company, ever.

Philip Elmer-DeWitt of Apple 3.0 recently reported that Sacconaghi was joined by more than a dozen other analysts who “have been scrambling to keep up with the stock all quarter long.”

Media narratives were as bad as the analysts

Across the same series of years, prominent talking heads recited many of the same narratives contributing to the idea that “Apple’s best days were behind it.” They were incessantly claiming–as Bloomberg blogger Mark Gurman and the typically anonymous reports from Japan’s Nikkei–that few would buy the premium-priced iPhone X, that customers in all markets were really more interested in cheap Androids, and that any problem occurring anywhere in Apple’s supply chain could only mean that demand for iPhones was drying up and that nothing else that Apple was doing could possibly make up for a lack of growth in iPhone unit sales.

Every one of those stories was wrong. And it was easy to outline why they were wrong at the time they were being promoted as factual. AppleInsider repeatedly did, detailing why supply chain reports were not only unreliable, but had regularly been proven wrong year after year.

Bloomberg, in particular, kept generating reports that appeared grounded in fact, when they were just cherry-picking ideas that supported its narrative of a fading, failing Apple while intentionally excluding material facts that contradicted the story.

It certainly appears possible that the incessantly false reporting targeting Apple has exerted significant negative pressure on the company’s share price, meaning that rather than currently being inflated with irrational exuberance, its recent climb is merely a correction of its historical repression by incorrect, ignorant, and occasionally even malicious reports that blinded investors to what was really happening.

Earlier this week, Deutsche Bank analyst Jeriel Ong increased his price target for Apple to $ 280 but warned investors that “the stock is unlikely to come close to repeating last year’s returns.”

But performing the math on that means only that Apple is “unlikely” to reach significantly above $ 550 by the end of 2020, hardly something investors need to be cautioned about.

How to Change Your Disney+ Profile Picture

A Guide to Setting up Your PlayStation VR – Accessories

VR Support for ‘No Man’s Sky’ Being Considered by Developer

This Week In VR Sports: Tabletop Football And ESports Deals