Apple Music is joining in a music industry wide ‘Black Out Tuesday’ campaign, to raise awareness for Black Lives Matter in the wake of Minneapolis resident George Floyd being killed whilst under police arrest. Apple CEO Tim Cook previously tweeted his support of the protests happening across the US and around the world.

Apple Music has cancelled its usual Beats 1 radio schedule and is instead directing all iOS and macOS users to a single streaming station that celebrates the best in black music.

As far as Apple Music is concerned, the service’s For You and Radio tabs have been stripped back to focus on a single playlist ‘For Us, By Us’ featuring black artists.

Some users are seeing a full screen takeover and a Listen Together button as screenshotted above. However, the rollout of this view seems very sporadic. Most users are seeing the usual layout of the Browse and Radio tabs, like this: 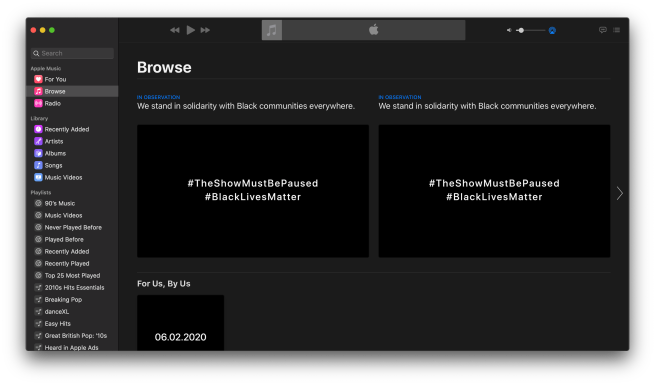 You can access your music library, and search the Apple Music catalog, as normal.

There is also a live streaming station with the idea that all Apple Music users can listen to the same music simultaneously. The radio stream is periodically interjected with a voiceover that says “this moment calls upon us all to speak and act against racism … we stand in solidarity with black communities everywhere”.

On Tuesday, June 2nd, Apple Music will observe Black Out Tuesday. We will use this day to reflect and plan actions to support Black artists, Black creators, and Black communities. #TheShowMustBePaused #BlackLivesMatter pic.twitter.com/xkvn31DpYc

The Show Must Be Paused is an initiative being adopted across the music industry. For instance, many labels are not releasing new music this week and instead donating and raising awareness for black communities.