In June 2018, Apple announced that its Maps app would be rebuilt “from the ground up” with more accurate details like grass and trees, pools, parking lots, exact building shapes, sports areas like baseball diamonds and basketball courts, and pedestrian pathways that are commonly walked but previously unmapped. 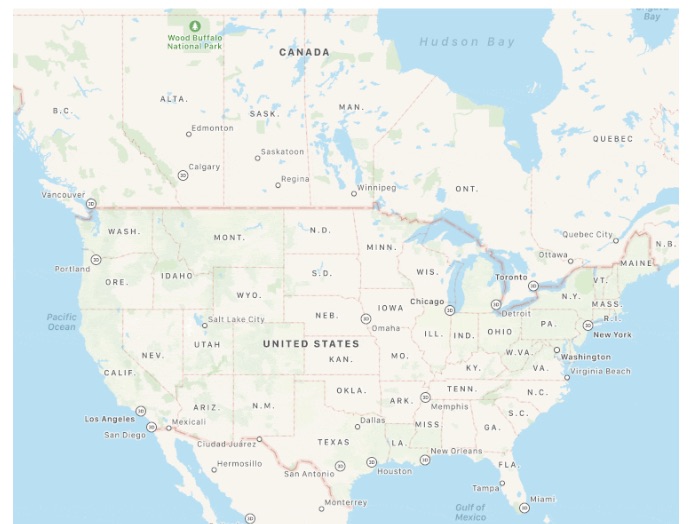 Apple Maps with revamped data in Western and Midwestern U.S. via Justin O’Beirne
The revamped Apple Maps experience first rolled out to Northern California during iOS 12 beta testing last year and has since extended to Southern California, Arizona, New Mexico, Texas, parts of the Gulf Coast, and several Northeast states such as New York, New Jersey, Pennsylvania, and Massachusetts.

The expansion continued this week, as Apple has finished its rollout of the improved maps in parts of the West and Midwest regions of the United States. This includes Colorado, Utah, Nevada, Wyoming, Idaho, Oregon, Montana, Washington, West Virginia, Ohio, Michigan, and parts of Illinois and Indiana.

Justin O’Beirne has fantastic coverage of the Apple Maps revamp, noting that the improved maps now cover 27 states fully and another six states partially. In June, Apple said the improved maps would cover the entire United States by the end of 2019, followed by additional countries in 2020.

As usual, some users will see the revamped maps in their region sooner than others, so we wait until the rollout has extended more widely to report the news. If you do not see the improved data yet, give it some time.

(Thanks to Matt, Frank, Noah, Alan, and all others who tipped us!)

How to Change the Background in Google Slides

What companies that value raw data understand about analytics

Nokia 9 PureView in for review

Tips for the Mac user new to working from home

Life In 360°: History In A Land Of Lost History

Ford's performance future is electric, and here are the vehicles that will…

Does HQ Live Trivia Game Show Live Up To The Hype?

Why you might see a new “Data” disk in Catalina

Exynos 7872 unveiled: hexa-core CPU with A73 cores, plus an iris scanner

Geek Trivia: When You Receive Bacn, You’ve Received What?