Following Apple’s release of a fourth macOS Mojave developer beta, the company on Tuesday pushed out a third evaluation version of the upcoming Mac operating system to members of its public beta program. 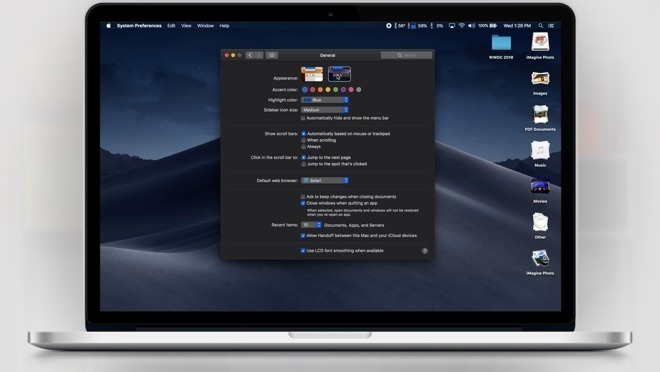 Related Finder upgrades include customizable, contextual Quick Actions that save users time on common tasks like resizing images, adding passwords to documents and creating a PDF file from multiple photos.

A new Stacks feature clears up desktop space by automatically grouping files, folders and other documents into stacks, while the screenshots mechanism has been enhanced to more efficiently process images and video captures.

Expanding on existing Continuity tools, Continuity Camera lets users take a photo on an iPhone and insert the image directly into a macOS app like Pages or Keynote. Also revamped is the Mac App Store, which borrows heavily from the successfully redesigned iOS App Store.

Apple will in a future version of macOS enable developers to port iOS apps into versions that run on macOS. Initially, however, the company is testing the technology with first party apps like News, Stocks, Voice Memos and Home, the latter of which allows users to control their HomeKit accessories from a Mac.

Users who wish to take part in the beta testing process can sign up for access through the Apple Beta Software Program webpage, which also offers downloads for upcoming iOS 12 and tvOS 12 builds. </span>

U.S. carriers, apps and others hit by massive outage in the Northeast

It's way too easy to accidentally reply to Instagram Stories

Harry Potter: Wizards Unite took off like a Nimbus 2000

Rose Galaxy Note10 appears in renders ahead of announcement

You can get the Samsung Galaxy S7 for $465 in India

Daimler says EVs on target after report of launch delays

Why language technology can’t handle Game of Thrones (yet)