Apple has ended a standoff with the telecommunications regulator of India, approving TRAI’s anti-spam app for inclusion in the App Store, a move that also allows Apple to avoid threats from the regulator that could have led to the banning of iPhones from the country’s mobile networks. 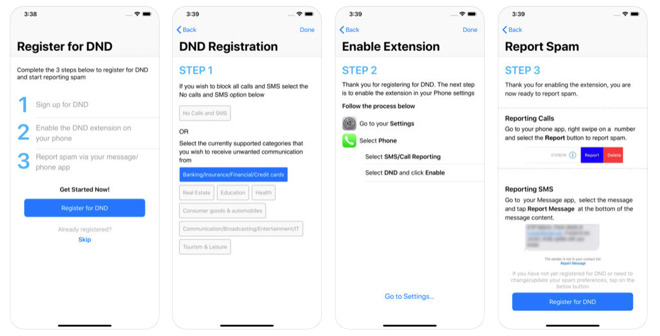 The Telecom Regulatory Authority of India (TRAI)’s DND – Do Not Disturb app, is an attempt by the Indian government to cut down on the amount of unwanted marketing calls or spam text messages. Once a mobile number is registered, the app can be used to log complaints of unwanted calls, a problem that has plagued mobile users in markets around the world.

An Apple spokesperson confirmed to VentureBeat the app has gone live in the iOS App Store today.

The addition of the app to the App Store arrives after a long, protracted disagreement between Apple and TRAI over the app. While the Android version of the app launched in June 2016, the iPhone equivalent was held off from being made available due to Apple’s belief it infringed too much on a user’s privacy, with its policies typically preventing third-party apps from acquiring call and text log data.

One year ago, Apple advised it would work with the regulator to produce a limited version of the app that would find acceptable to distribute, but as the months rolled on, the dispute failed to be resolved.

In July, TRAI introduced new regulations that would force carriers to only use smartphones on its network that worked with spam reporting apps like TRAI DND, and to prevent devices that wouldn’t work with the app from accessing the network. While TRAI could not directly ban iPhones, it did have the authority to pressure carriers into actions that would provide a similar effect.

Similar demands from TRAI were made in August, but the regulator added the possibility of challenging Apple’s disobedience in court. The approval of the app effectively brings an end to the standoff.

Apple did introduce a call reporting framework in iOS 12, which enabled the creation of spam and nuisance call-reporting tools. It is unclear if TRAI’s app was approved because it uses the framework and follows App Store policies, or if Apple ultimately gave in to demands. </span>

MWC 2018 is over, here are the highlights

Persona 5 Royal: A Look at the Phantom Thieves

This car museum is a three-ring attraction

Making The Grade: Passive notifications on Apple Watch make it ideal for teachers

Our Xiaomi Mi Max 3 video review is up