Apple opened the doors to its first retail store in South Korea on Saturday local time, and the company’s head of retail Angela Ahrendts was on hand to take part in the grand opening festivities. 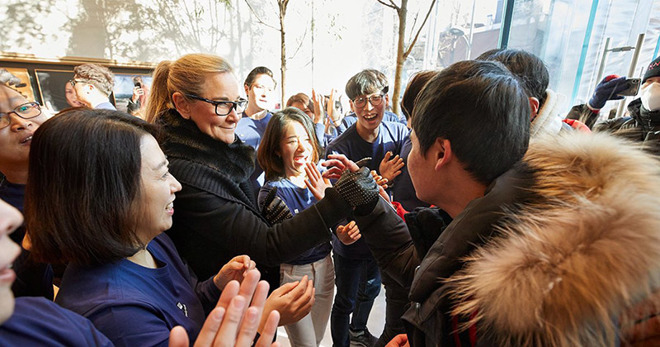 After joining the store’s 140 employees in welcoming customers into the new Garosugil location, Ahrendts posted a message about the event to Twitter. An accompanying photo showed the retail chief shaking hands with a fan.

“Awestruck by the Apple fans in Seoul who braved beyond freezing temperatures to join us at Apple Garosugil this morning!” Ahrendts said.

Apple shared pictures of the store in a post to its website earlier this week, showing off the wide open space built from concrete, wood and glass.

Additional photos captured by Hypebeast, which was granted an inside peek at the outlet this week, reveal a lower level meeting room. Larger Apple retail locations boast accommodations for enterprise clients and other special guests. The online publication also took closeups of Apple’s product demo tables, accessory avenues and the store’s general architecture.

Rumors that Apple would open a retail outlet in South Korean, home of smartphone rival Samsung, have circulated for years. Plans for a Seoul location surfaced a year ago when the company posted hiring notices for various staff positions including potential candidates for the Apple Store Leader Program.

Like other recent Apple retail openings, customers at the Seoul store were greeted with a commemorative gift, likely a T-shirt or some other bit of memorabilia.

Olé! Sales Of Nintendo Switch In Spain Have Now Surpassed Xbox One

How to Customize AirPods Tap Controls

Musk has no plans to relinquish chairman, CEO roles at Tesla, report says

Enjoy the Paintings of Vermeer Through Google’s AR Pocket Gallery

An Augmented View of the Stars

Here’s what the 16-inch MacBook Pro keyboard sounds like