Alphabet has revealed Google’s earnings for Q2 2017. The company recorded $ 26 billion in revenue, 21% UP compared to the same quarter last year. Net income is only $ 3.5 billion because of the $ 2.7 billion fine by the European Commission. 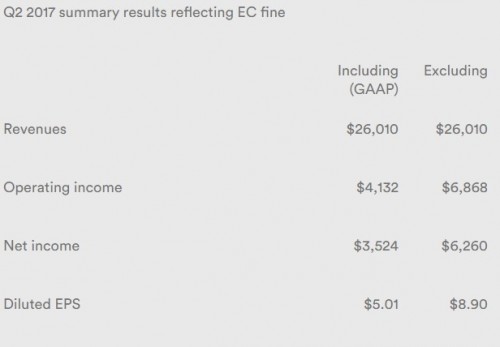 The advertising business rose 18% and brought in $ 22.7 billion, driven by a 52% increase in paid clicks. “Other bets” by Alphabet that include Nest, Fiber and other companies recorded an operating loss of $ 772 million. This is less than the $ 855 million back in Q2 2016.

In a separate announcement, Alphabet announced its newest member of the Board of Directors. His name is Sunday Pichar, CEO of Google since 2015. He is responsible for Google’s product development and technology strategy and will answer to the board on the same issues.

GM pressed by 2 Senators to build all EVs for U.S. stateside

Report: 6.1-inch LCD ‘iPhone 9’ model with dual-SIM to be exclusive to China

Review: ‘Sky – Children of the Light’ has arrived on the iPhone and…

VW will offer incentives to trade in older diesels in Germany