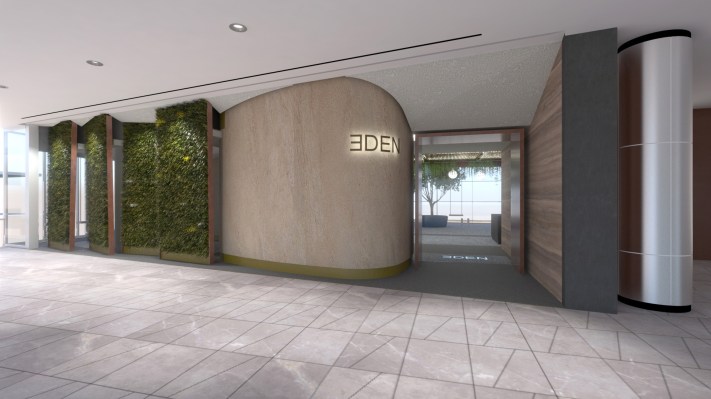 3DEN is building spaces for what it calls the “in-between moments” of your day.

The name (pronounced “Eden”) comes from the idea of the “third place” — a space that’s neither home nor work. Founder and CEO Ben Silver told me the idea is to create a space that people can use if, say, they’ve got 45 minutes to fill between meetings, or if they’ve just gotten off a red eye flight and need somewhere to freshen up.

Coffee shops, coworking spaces, gyms or hotels might serve some of those functions, but Silver said 3DEN is “aggregating many different services” and bringing them together into “a very reliable space.” He suggested that the closest analogue might be a members-only clubhouse — except that instead of charging a steep membership fee, 3den requires no commitment, with pricing start at $ 6 for each 30 minutes of your visit.

Earlier this week, I dropped by the site of the first 3den, located in the shopping area of New York City’s Hudson Yards development. The space is still being built, but I saw booths for phone calls, private showers and even swings for relaxing.

Silver said there will be a meditation space and Casper nap pods, too. He emphasized the nature-inspired design, with plenty of trees and plants, as well as the space’s “acoustic zoning,” with some areas designated for socializing and others designed to be quieter and more restful.

So if you want to catch up on some work, make some calls or even host a meeting (you can invite and pay for up to two guests), you can do that. If you just want to chill out and relax, you can do that, too.

Silver said that while the space will be staffed with a few hosts, technology will be key to the experience, with most transactions being handled via smartphone app. If you’re interested in visiting an 3den space, you check-in via the app (which will tell you the current crowd level, and put you on the waiting list if the space is at capacity) and you can also reserve a shower and make purchases.

3DEN’s core services will be included in that $ 6-per-half-hour price, but Silver said there will be a retail element as well, with visitors able to buy products in categories like food and health/beauty. He also said he’s exploring additional pricing models (such as corporate memberships) for regular guests, but he emphasized the importance of “no commitments” pricing that makes the space accessible to a wide swath of visitors.

The first 3DEN location has a planned opening of March 15, and Silver said the company is also negotiating for four additional locations across New York City.

Here’s when the Samsung Galaxy S11 could be announced

Android 8.0 Oreo update begins to roll out to devices in the beta program

Everything you need to know about iOS 13

Why Do My Mac’s Desktop Icons Say “Out of Space”?

Week’s best Apple deals: Get a giant iPad Pro for $475

It's About the Journey, Not the Destination in Wheels of Aurelia